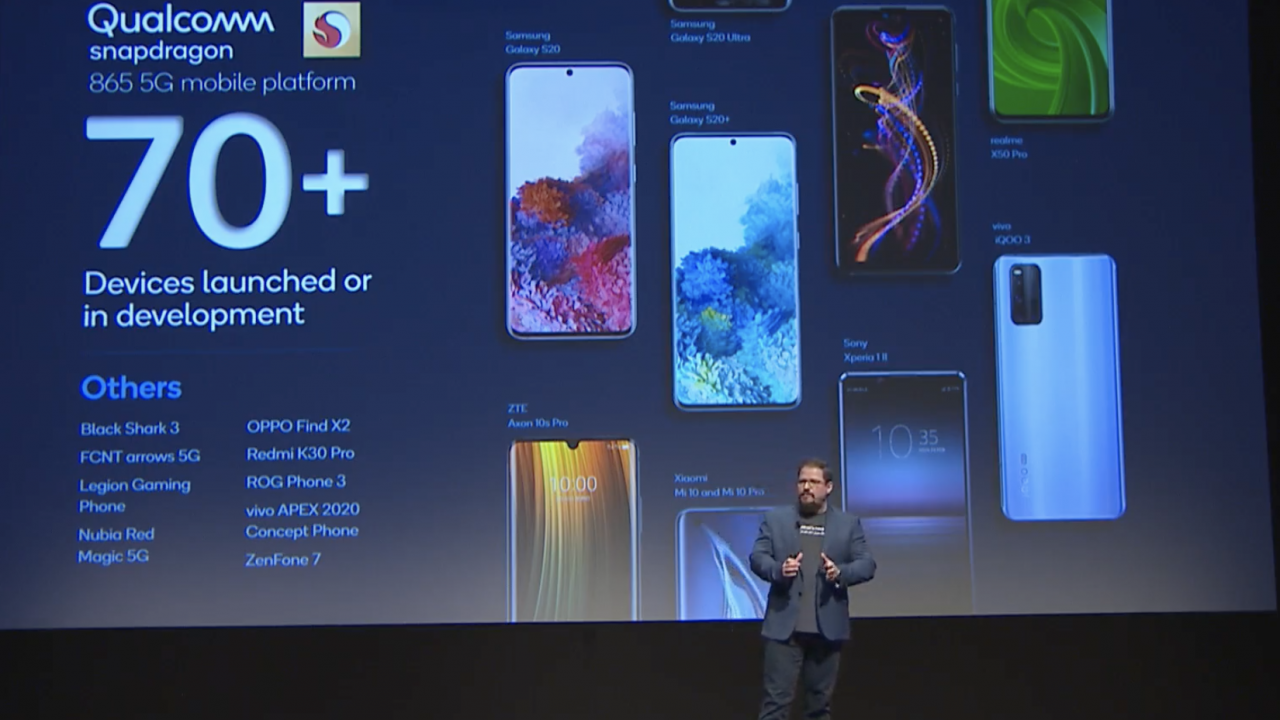 The News: Qualcomm Technologies, Inc. announced that global original equipment manufacturers (OEMs) and brands ASUS, Black Shark, Fujitsu Connected Technologies Limited, iQOO, Lenovo, Nubia, OPPO, realme, Redmi, Samsung Electronics Co., Ltd, Sharp Corporation, Sony, vivo, Xiaomi and ZTE have selected the Qualcomm® Snapdragon 865 5G Mobile Platform for their 5G device launches this year. Read the press release on Qualcomm. Analyst Take: This week continues a series of positive announcements from the San Diego based leader in mobile chips. Last week I provided some analysis following the company’s launch of its third generation 5G mobile RF platform, the Snapdragon x60, as the company revealed what is next for 5G. That announcement provided some significant excitement for 5G devices that will come early next year. Today, the company shared some of its planned content for this week that would have been delivered at MWC but couldn’t as the event was cancelled due to the concerns around Coronavirus.  The event itself was a well executed livestream that was hosted by Qualcomm’s CEO, Steve Mollenkopf and its President, Cristiano Amon. I was also impressed by the quick orchestration of the event and the support the company received from global technology partners including Microsoft, Facebook, Samsung, Ericsson and Rakuten. Having these companies share the stage added significant depth and credibility to the content and announcements. 5G growth is starting to ramp up as more devices, operators and services are being deployed, there is a healthy market for 5G device adoption. At Qualcomm’s 2019 Snapdragon Summit in Maui, the company shared conservative estimates of 1.4 Billion 5G devices in market in the next 3 years. With a small number of devices in market in 2019, this means that 2020 should be a big year for new device announcements and the Snapdragon 865 appears to be the platform of choice for a broad group of OEMs looking to meet the customer needs for premium tier 5G devices.  The Snapdragon 865’s Big List of Design Wins Based on Tech Leadership Perhaps what caught my attention more than anything was the volume and velocity of the Snapdragon 865 and the 8 series in general. The company shared that there were more than 70 designs in progress on the Snapdragon 865 and that the 8 series platform has more than 1,750 in total. This includes other popular 8 series including but not limited to the 845 and 855.  A list of popular devices set to utilize the Snapdragon 865 mobile platform included

What is more important though is why the platform has been chosen. I believe it is as simple as the most trusted and capable technology in the market–Tech that competitors like Huawei are unable to match at this point despite some of the claims being made by the company. Device makers like Samsung spoke at the livestream announcement today pointing out that the camera is the most important feature on a smart phone and the Snapdragon 865 was able to win the new premium tier S20 based partially upon Qualcomm’s Giga-Pixel speed photography. Also AI, Gaming and advanced Wi-Fi features have all been well received by device makers looking to build ultra-premium devices.  Overall Impressions on the Snapdragon 865 OEM Announcements There really isn’t a big surprise here. Qualcomm has been flexing its proverbial muscle in 5G platforms winning the designs and commitments of some of the most popular devices in the world. Recently, the Samsung flagship S20 represents a great example. Of course, Apple is also committed to including Qualcomm technology in its first 5G device expected late this year or early next year. These are representative of best of breed features and technology being entrusted by the company’s that are building the world’s most chosen device makers. Several of the other design announcements from company’s like Xiaomi, ZTE and OPPO also represent the company’s influence spreading to greater lengths in markets like Asia and Europe. All of this is positive for Qualcomm.  The biggest thing to pay attention to is going to be the 5G adoption numbers as Qualcomm isn’t selling the service and is more often a partner operating with the device makers and service providers. So it is critical that these device makers compel the market with the features, capabilities and supporting network to realize the high speed, low latency and exciting connectivity that is possible with 5G.  Futurum Research provides industry research and analysis. These columns are for educational purposes only and should not be considered in any way investment advice. Latest insights from the Futurum Research team: China Chipping Away at Smart Speaker Market as Amazon Maintains Lead Amazon, the US Government and the JEDI Contract–Futurum Tech Podcast Nvidia Breaks Revenue Records in Data Center as AI Demand Surges Image Credit: Qualcomm