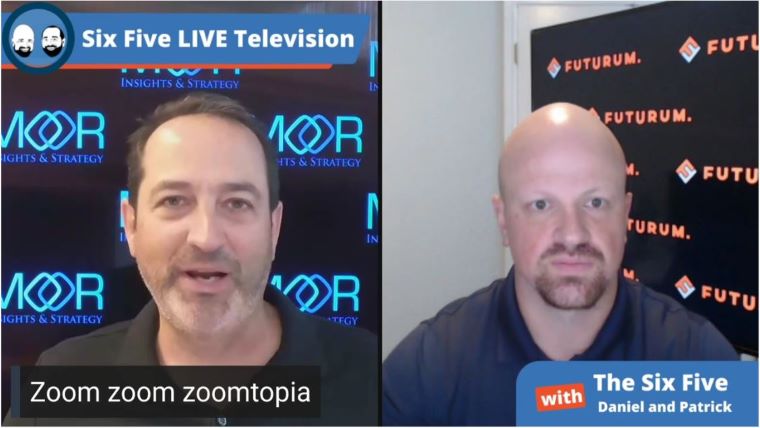 Daniel Newman: I think the first two topics I’m going to let you run the show or at least the first one, you start out. Let’s talk about a big two days Zoomtopia event. Patrick Morehead, it’s your mic.

Patrick Moorhead: Thanks Daniel. As a reminder Daniel and I go back and forth and we both based on our personalities would like to lead on all of these, but sometimes I lead, Daniel lags. Sometimes Daniel leads, Pat lags. But we keep it fair like that because we wouldn’t want one of us to have 95% of the airtime and that’s-

Daniel Newman: Or would you?

Patrick Moorhead: I don’t know. Well, that’s why we have our own individual podcast Daniel, so we can just listen to ourselves and only ourselves talk. So let’s move to Zoomtopia. So Zoomtopia is Zoom’s annual event for end customers, for channel partners and industry analysts and press, analysts like us because we’re not the press.

Although sometimes we get confused with the press. You can read our analysis, both our analysis on everything that was announced, but Daniel, what I wanted to talk about were some of the bigger picture items. So first and foremost, and it’s weird, sometimes I do my best thinking in the shower or sometimes in the bathroom, sometimes walking town lake here in Austin.

But my biggest takeaway is full stack. Zoom is all in on a full stack collaboration solution and early on before Zoom was the rockstar that it is right now, there are a lot of questions on, is video a product or is video a feature of a bigger product, right? We saw Microsoft with Teams. We saw Google with Workspaces and Meet where it’s really a feature, right?

That’s integrated into a suite. And if you buy into this, then fundamentally you had to ask, what was Zoom going to do next? Were they going to be an API provider for video? Well the answer is no, and they’re going full stack.

So obviously they had their video capabilities, but they leaned into chat more than I’ve ever seen the company lean into chat in terms of its capabilities, in terms of its fluid representation and moving experience in and out to create enterprise value. And Daniel, I can’t help but to think this might’ve had a little bit to do with Salesforce buying Slack and then doing a strategic deal with Amazon, with Chime to deliver video.

So, that’s one. Evidence part two is Whiteboard. So instead of having partners for Whiteboard, Zoom is creating its own Whiteboard. Those are a big deal. So Zoom is essentially going to go head to head with Google and Microsoft. The one thing we haven’t seen Zoom’s answer to yet is a productivity suite. And maybe we can discuss whether they need a productivity suite like Google and Microsoft has to compete.

And I almost laugh and throw up in my mouth a little when I say this, but even Salesforce has it with Quip. So, that’s the one big thing they’re missing. Aside from that, I was a little confused at first, but Zoom came out with a video call center which they don’t call a call center because they’re in the midst of acquiring Five9.

But this is really you see what I see. Think of a doctor’s appointments and a doctor’s visit that you go into where you actually have to see them. It’s simple, it’s not complex. You need to see what they see and seems to make a lot of sense, and really doesn’t seem to overlap with Five9 at all. And Five9 is doing a ton.

We had a CEO role in Trollope for Six Five insider, but they’re making audio sexy with automation and AI. So it is different, and the final thing after, Dan, I’ve sucked all the oxygen out of this room, on this topic is conferences. Zoom actually held their conference, Zoomtopia on their own product events/conferences, which I thought was pretty cool.

You’re going to have different tracks. There’s about 10 pretty high value features in there. And I think we should check it out, potentially use it for the Six Five summit. We’ll compare it to some other solutions, let’s say from from Cisco that offer similar types of products. So anyways, full-stack provider, that’s my biggest takeaway.

Daniel Newman: There’s a lot there and you did cover a lot. So I won’t take a lot of time, though a couple of things that caught my eye. One, the unified messaging product. I shared it out on social. I did have a few people come back and ask, is that Slack? But one thing I think that Zoom does understand is the mix of synchronous and asynchronous communication.

It became very evident. And I think platform, we’ve entered the era of the platform. Platforms are sticky. And so when you asked that question about productivity, I think platform is going to be the way Zoom is going to answer those questions, is well, we don’t have it, but we have a platform that’s extensible. And our platform will attach.

So you want our full stack, video and communications and chat solution, but you are a Office 365 user, we’ll make that possible. Of course, Microsoft is going to say, use us top to bottom, left to right, across the board. But we do know Zoom has hundreds of thousands of paying customers, large paying customers, and they continue to add to that every quarter.

So those customers need a solution to incorporate productivity. And then of course, as we look at what the Microsoft, what Salesforce is doing with these kinds of fully vertically integrated productivity, and then business application suites, the platform, yet again can become the answer. You want to make it extensible.

You make it extensible to connect to a Salesforce service cloud or a sales cloud, or a SAP ERP system. And you are able to extract the data that you need through the platform. Does that mean that Zoom doesn’t need to, or won’t have to figure out a way to tell this story and make it convincing? No, they’re going to be accountable to do that.

But just like Cisco and WebEx, and we’ll talk more about Cisco later, but just like that. Deep down as I see it, they will have a way to address it. The platform will be the narrative, and then you’ll see more inorganic acquisitions continue to come especially as Zoom sits on more and more cash through its massive growth and profitability.

So overall good events. And of course, Pat, me liking to talk investor stuff. They did actually host an investor event right in the middle of Zoomtopia. So we did get to hear from CFO. Kelly Steckelberg did a great job presenting that, but we talked a lot about those numbers and earnings after earnings last week.

So we won’t shed another tear for what happened or what will. We appreciate. Zoom. Zoomtopia, good event. Thanks all