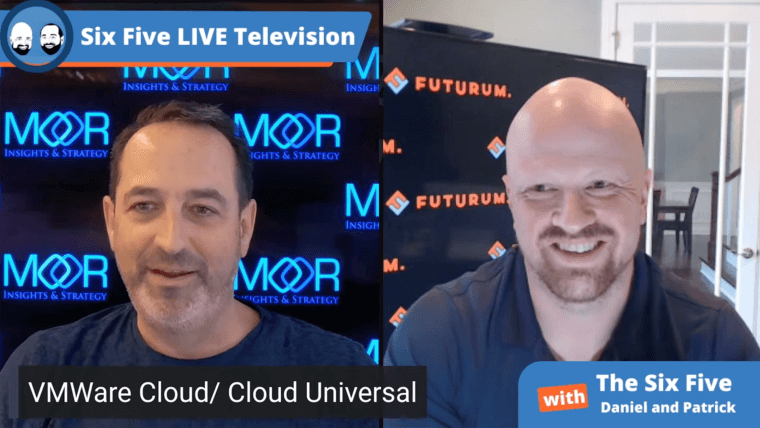 In this video take, the Six Five team discusses VMware’s latest cloud announcement and what it means for their overall cloud strategy.

Daniel Newman: Alright, so let’s jump to the next thing. Pat, you’re on fire this week writing pieces on a lot of things. And another company you just absolutely cannot stop talking about it just keeps doing things. Well, has been VMware and VMware had a pretty big announcement and its cloud strategy.

Patrick Moorhead: Yeah. So VMware, previous stalwart of VMs actually still stalwart made a bunch of acquisitions to get into the new age of containers. VMware is one of those companies that everybody says they’re dead, but they just keep growing, which I think is a testament to the leadership of Pat Gelsinger and President Sanjay Poonen. But what they did this week is a couple things. So first off, they simplified some of the terminology. They created VMware cloud, and they went as a service with it with VMware cloud universal. And with VM VMware cloud, you can you can deploy apps to VCF running AWS, Azure, Google, IBM Cloud, Oracle Cloud, VMware cloud on Dell and EMC and across hundreds of VMware cloud certified partners. Now the snarky thing about the decoder ring is that they combined a lot of stuff in there on VMware cloud, merging Tanzu and VCF. And go read the article if I’ve confused it even more. To me, this is the big setup for the spin off from Dell. Where even though Dell was doing a lot of the selling and marketing about VMware cloud, and VMware was actually delivering most of it out there. To me this is getting them set up to be on their own and the ability to work with more closely with even other providers like HPE, Lenovo, and even Cisco.

The second thing that this did is got them officially into as a service and Daniel if we’ve talked about here and whether it’s HPE Greenlake, Lenovo. Cisco officially announced their networking as a service, enterprises want the option of doing everything as a service. And even if they have to pay more for it, you know, nobody saves money going to Amazon, it was the flexibility. It was the dare I use the word agility, a little bit more than a marketing term to do this, and that this really brings VMware and its customers and positions, its new Kubernetes offerings and multi cloud offerings for the next five years and a glide path to detach from Dell. And again, not complete, detach, I think Dell will be their primary go to OEM and that, you know, we’re going to have to see what long term agreement is agreed to between the two companies, but I do expect VMware to do even more with companies other than Dell into the future.

Daniel Newman: VMware could end up looking a lot like the Red Hat within IBM in the sense of, you know, one way you know, IBM, very much owns Red Hat, but has kept it very much operating it that’s kind of how Dell has done it over the years too. Where people that follow the companies closely know there’s that relationship and people that don’t have been able to completely operate within or without the ecosystem. But what Dell has done really well has been a massive shot in the arm for VMware has been its sales arm, Dell has a massive and very capable sales team. So let’s definitely move that on. Because you know, I think as a whole good story, VMware is here to stay, they get it, they need to move from position space to cloud, it’s going to happen, new leadership there, it’s going to be interesting to track what happens to that the 13 D that’s still out there still looming.