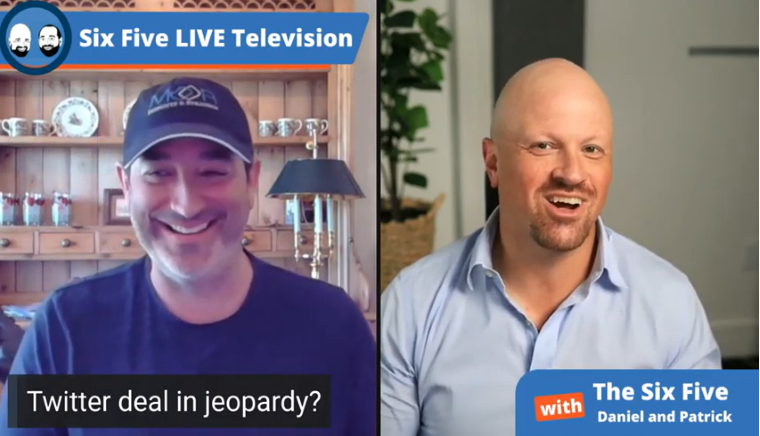 Patrick Moorhead: I should have called this in the Chiron, Twitter deal in jeopardy again. If you’ve been involved with a deal or track deals, you have people’s investment banking arms and strategy arms leaking certain pieces of information to the press. And this one is essentially from a Washington Post article talking about being in serious jeopardy, according to three people familiar with the matter. But here’s the thing. Elon Musk’s camp is concerned with the amount of bots, or robots that are on the platform. Twitter has publicly filed in SCC documents and said publicly a certain percentage, and Elon Musk and his team want to know exactly what that number is before they wade into it.

I still believe that Elon wants to buy Twitter, but he doesn’t want to pay the current offer price. He wants there to be a discount correlated to the number of bots, and I can’t blame him. He can’t go in there, do due diligence, buy the company and then restate that X percent of the traffic to the advertisers is driven by bots. That would be catastrophic for the share price. I don’t think advertisers would be willing to pay what they’re currently paying, and that would hit revenue, which then again, that in turn would cause the stock to spiral.

Daniel Newman: Yeah, you hit it pretty quick and sharp there, Pat, for a topic that is super nuanced, but really has gotten more than its fair share of air time. Elon is right. And I know people don’t really want him to be, because he’s just a guy that people love to hate. Him and his nine children, and 17 mom. I mean, I don’t know anymore what this guy’s got going on. But as a business person, we have to sometimes be nuanced enough in our brains to separate. And this is probably the most misunderstood thing. And I’m not 100% sure I’m right on this, but I’m pretty sure I’m right on this. When you say you are willing to waive diligence, that generally means, or has a clause though, that the information that was provided to you in the documents, the public documents that, by the way, the SEC regulates, are supposed to be correct.

So there’s a couple interesting things here, Pat, in the underpinnings. One is, did Twitter commit fraud? I guess the point is, is there a difference between fraud and stupidity, and is Twitter stupid? And I mean this because with all the money, and investment, and engineering and talent that they have, they can’t figure out their bot situation. I don’t really believe that. I don’t believe that. I have a hard time thinking they couldn’t get to the bottom. Now, did they spend any money, time or effort figuring it out? That’s another question there, Patrick Moorhead, because why would they? Why would they spend any time, because frankly, their user number and growth was already somewhat dismal over the last 10 years. And going back and like, yeah, we’re growing really slow, but also most of our growth isn’t real. I really don’t know how believable or well the market would respond to that.

What I do believe is Elon likes the platform. He sees value. He sees an opportunity to clean it up and make it better. And that we do need a fire hose of discourse that can be well managed with real people on it, having real conversations, getting the information in near real time. And I think that for a different price, he probably will go through with the deal, but the information provided to him, it appears to have been wrong. And I think that gives him the opportunity to pause, to renegotiate and potentially back out. He’s in the power seat here. And despite the fact that his stock is worth less, his fortune is worth less right now, Twitter doesn’t have a lot of options.

And so I feel like there’s a pretty high probability they’re going to renegotiate. And the market, by the way, is agreeing with me, because at a $52 buy price that stocks trading at $33 bucks. So if you believe this deal’s going to get done, there’s a great arbitrage to be had here. I just don’t see it. I think it’s risky. I think he’s got too much ability to move away. And he has that, what’s that? A billion dollar walk away that he had in the clause. So even if someone tried to hold him accountable, that the numbers were good enough, which I don’t think they were, he could still probably, for a billion dollars, walk away and then come back to the table and buy it for about half what he originally had offered for it.

And I know people out there probably prefer for me to hang Elon with a noose of his deal making skills, but in this case, I think he’s right. And I think that Twitter, unless they can prove that they have no negligence and no stupidity, they can’t share those numbers if they’re not real. And that’s, by the way, something the SEC probably, I don’t know, Patrick Moorhead. Again, I’m not a fraud guy, but it feels to me like there’s an accountability that lies more on the Twitter side than the Elon side.

Patrick Moorhead: Twitter needs to get cleaned up. It’s a mess. I’ve seen enough evidence of bias that I’d like to see the deal go through. I’d like to get it, I’d like to see it cleaned up. And I think Elon said it right, which is, 10% on the left are crazy, and 10% on the right are crazy, and let’s have a platform that understands that and pulls that in. That the idea that we’re censoring presidents of even the United States is kind of mind boggling to me. And yeah, I get the whole, is it a public utility? It’s a company, but I’ve got to tell you, the sharpest and quickest way to get regulated is when you’re a private company and people start questioning whether you should be regulated.

I mean, look at all the heat that Amazon is taking, which heck, they’re saying Amazon has such a lead in online buying that essentially it’s the public square. You have to use the public square of Amazon. And I guarantee you, if they’re scrutinizing Amazon like this, they should be scrutinizing Twitter on this. Or maybe Washington views Twitter differently. Maybe those in power in Washington like what Twitter is doing, who they censor, and who they don’t.

Patrick Moorhead: I put a maybe in there.

Daniel Newman: Okay. That’s safe then. Yeah, you did the analyst thing. It’s a possibility that this could happen. Yes, I get it. I think, unfortunately, there are large swasses of the population that are just either not well read, not paying attention, don’t care, or… Well, I don’t know. I’m going to stop there, because what I want to say next probably isn’t going to help anybody. This is interesting, though. It’s going to be fun to watch what happens.