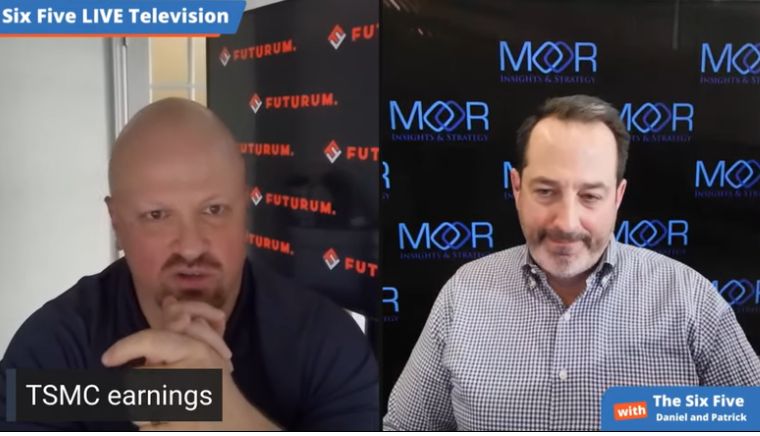 Daniel Newman: On the polar opposite of what Intel’s been dealing with over the last few years, TSMC has been an absolute rocket ship. Now, look, you and I have been more than outspoken about our concerns about TSMC. The concerns are very little to do with the company’s performance and mostly to do with the dependency that we’ve created here in the United States and now around the world for TSMC’s leading edge process capabilities and manufacturing that takes place in Taiwan, and Taiwan, Pat, it’s almost been a hundred years, but they did, what was it? Around 1949 when China said in a hundred years they would come back.

Now, all kidding aside, China builds their economy with a thousand years in mind. We build ours with the next election or special election in mind. So we make very short-term decisions. They tend to make longer term decisions. That’s not good or bad, but the problem is with Taiwan being so important to so many of our leading edge chip design companies is that if something was to happen and if China did decide in less than a hundred years to go back and stay claim to what they believe is theirs, we would have a lot of problems like no iPhones, no accelerated computing chips from any of our fabulous designers.

Patrick Moorhead: No. First of all, I want to thank you for leaving me a slot on there.

Daniel Newman: No, I just talked about the metaverse. That’s all. That’s what they have me come talk about. They have you talk about real things and they bring me in to talk about things that’ll never actually mature into actual marketable goods. Kidding.

So quickly touch, huge growth, huge EPS, 76% earnings per share. Now, that kind of growth probably comes from a combination of locked-in contracts, improvements in supply chain, able to get goods. The numbers were outstanding. Now, they did forecasts to a more conservative future. So a really great result, if I looked at it right and I was reading, by the way, best earnings release ever. It’s two paragraphs and that’s it. A lot of these earnings releases, they’re like books. There’s just literally probably 300 words.

HPC, IoT, automotive, all higher margin parts of the business. Now, what does that also mean though? A lot of the revenue and growth is not coming from devices, and that’s an area that they’ve done very well in some recent quarters, but they are guiding conservatively the future. They’re not as confident in and they were pretty outspoken about that, but they are very confident that they have the leading edge technology that as the market corrects, everyone will be coming back to them. The market’s open for interpretation on whether or not there’s an opportunity there, Pat, but all in all, given the fact that literally all we hear is doom and gloom, especially in the semiconductor, this was a bit of a bright spot.

Patrick Moorhead: It’s interesting and this is what I love about our relationship and our media stuff we do, we don’t always have to be in the mutual admiration and agreement society here. So what’s funny is, and I think the MarketWatch headline, what was perfect like, “TSMC Warren misses this and that and stock goes up,” and this is just part of what I love about it.

One of the things that I think the investors were really happy about that they thought that Q2 could be the bottom of the semiconductor trough because we’re still waiting. The bubble has popped at least short term. People aren’t buying as many smartphones and PCs. There’s also some research from Canalys that says smartphones were around 16% in the fourth quarter. By the way, PCs had about a 23% swing to the negative as well.

What I think was important, this is what I talked a lot about TSMC on, was the risks that the company has. People right now are assuming that the company is infallible, but China’s Xi Jinping has been very public that says he wants to unify China and that includes Taiwan. Militarily, I believe China is better off. Again, I’m not a military specialist, but this is what the spooks in DC tell me that China’s better off invading within the next two years than in the next five because they don’t have to come up against United States’ next generation weapons. It’s China’s latest generation versus quite frankly our old generation. What does that mean to TSMC investors if China invades Taiwan?

Then there’s, I think, even the bigger challenge, which is Intel 2024 to 2025. Intel’s betting the farm that it can become a competitive foundry to compete head-to-head with the company. I urge everybody not to write Intel off on this. I believe that just like the US mandated that all defense chips have to be fabbed in the United States and that’s what’s called the DoD RAMP-C that NVIDIA is part of with Intel, it’s going to mandate all critical infrastructure chips be fabbed in the US. That’s a belief that I have. So that would extend to healthcare, that would extend to the carriers, that would extend to banking, and every chip that is bought in there.

Intel’s likely to receive the lion’s share of the subsidies even though TSMC is building US-based fabs in Arizona quite frankly because TSMC does not. They lost the plot. They don’t know how to really talk the talk in DC. To be honest, they don’t have a lot of friends in the United States who even know how to educate them.

The other thing, a little fun fact for you, Dan and the listeners, TSMC is not building its leading edge products here, but rather technologies that will be one node behind what Intel is planning on doing. All Intel has to do, in my opinion, is get a toe hold with US-based Amazon and the packaging side, Qualcomm who has endorsed 20 Angstrom, and NVIDIA who’s already committed to the DoD RAMP-C using Intel 18 Angstrom. All that could spell trouble for TSMC. This is not 10 years away. This could be two or three years away. So that is something that I think that investors need to be looking at on TSMC and maybe even an opportunity with Intel.

Daniel Newman: So reminders, no investment advice here. So don’t actually listen to what Pat said. No, listen, just don’t do what he said. I want to boomerang really quickly because I got to bifurcate what I said and because you alluded that we have a difference of opinion and we do maybe, but when it comes to TSMC, when you look at this quarter’s earnings, my admiration is there because in the backdrop of what the world is ending in terms of the semiconductor of boom and bust and you look at Micron’s recent performance and some of the others, having a 76% earnings increase and a 43% revenue increase in this market is pretty miraculous considering a year ago we were still in what was considered that wild growth percentage. So this is just a bottom line fact of opinion. This is a fact. It was a good quarter.

Everything you said about Intel I agree. If you ask me, and I have it on the record multiple times where I’ve said a lot of people are focused on Intel’s five and four and the IDM and the process. I said the biggest opportunity nobody’s talking about with Intel is that IFS could actually become a massive business for Intel. There’s a lot of work to be done, but TSMC’S ability to bring leading edge here or not.

Now, first of all, they’re not, so that’s a door opener at this point. Second of all though, they’re not an American company, and with even Morris Chang, the CEO of TSMC going out on the record and saying globalization is all but dead, this basically means that policymakers are going to have a fiduciary and responsibility to the constituency to deliver leading edge manufacturing in the United States by ideally a US company and its allies.

Anyway, I think we largely agree, big opportunity for Intel. I do think TSMC is performing extremely well. That’s the ground truth that we always call earnings. You can’t go against that, but the opportunity here in the US, the policy and the opportunities that creates are substantial.