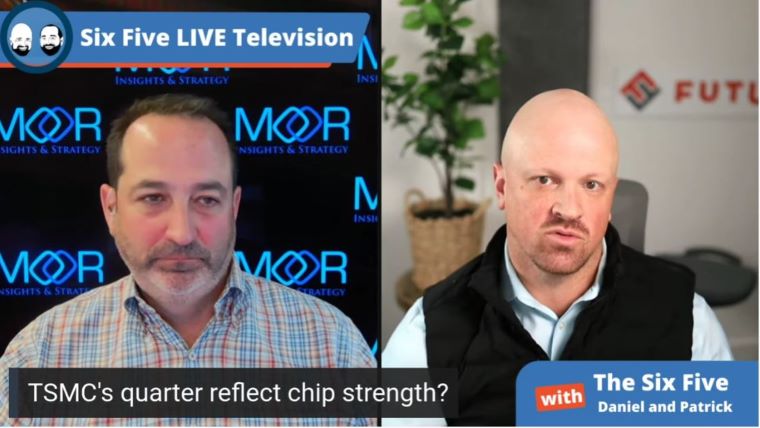 Daniel Newman: So final topic, maybe on a slightly more positive note. I wrote an op-ed in market watch early on in this week after TSMC came out with some really strong numbers. Again, this segment isn’t so much to talk about TSMC, but to talk about the impact and how to look at the market when a company like TSMC reports. Now, TSMC manufactures 90% of the world’s leading edge semiconductors. That’s the percentage based upon the most recent and research I was able to find. Not only did they beat significantly on the top and bottom line, Pat, but they also raised their guidance for the remainder of the year.

So while we’ve got all these forces that I talked about earlier, we’ve got macroeconomic and fed FOMC forces like rising rates, high interest, and high inflation, you’ve got the war and geopolitical consequences that are going on, and of course we’ve heard endlessly about this broken supply chain. But somehow despite all this TSMC, the company that manufactures chips for Apple, for Qualcomm, some for Intel by the way, AMD, NVIDIA, and others is actually manufacturing more chips, specifically calling out things like data center and AI as a big propellant of its growth.

The op-ed I wrote basically said, are we sort of being unreasonably negative towards tech and growth right now? Because if TSMC is any leading indicator, we should see some good results from Qualcomm, AMD, NVIDIA, AWS, Microsoft, all these companies. If tech is doing well despite a less accommodated fed, tapered purchasing, higher interest rates, inflation through the roof, a very tight labor market, rising and costs of labor, they’re still growing revenues, making more profits and guiding up. We sort of disconnected the economy and tech and as tech, in fact as deflationary, as I’ve been saying all along that companies are going to actually turn up the investment automation, AI, big data, cloud services, software at scale in order to make sure their businesses continue to grow, sustain, and operate, even in what is likely going to be either a recessionary, Pat, or at the very least a stagflation type of economy that’s being caused by a lot of decisions right now being made in Washington.

So net net, I’m thinking the next couple weeks, Pat, weighing it ahead, I think they’re going to be better than we expect. I think where we might just start see a little pullback is going to be some of the discretionary spend, notebooks, smartphones, some automotive purchasing could slow, but heck, Pat, we saw record housing starts just this last week.

Daniel Newman: We got interest rising and people are still starting homes. You’ve got cars still selling faster than they can be produced. I drove by a Toyota dealership in Round Rock the other day, and I’m not joking, Pat. There could not have been two cars in the entire facility. I don’t know sometimes about the narrative and the story and the media, but tech seems to be a bastion of hope right now in an economy where everybody’s kind of rooting against it. The sentiment’s really bad. I’m feeling good.

Patrick Moorhead: Yeah, so we saw 47% jump in earnings and a 36% increase in sales. The way that I try to see is if TSMC reflects on the market is really, they’ve doubled prices on some of their highest order semiconductor products. Then if I look at the percentage of revenue from those, I still think we’re going to have a good unit. I think so. I think, AMD, Qualcomm and NVIDIA are going to do pretty well. Even when I adjust for TSMC flexing their pricing muscle, I think it’s going to be good quarter. The smartphone market is down a little bit, so that might be the one thing I’m going to be squinting at, but PCs, graphics cards, data center, keeps on trucking.