The Tesla Team Moves Their HQ to Austin 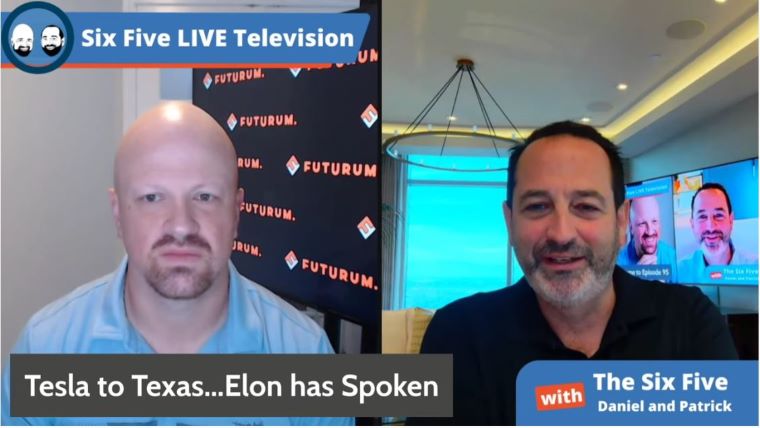 The Six Five team discusses yet another company moving their headquarters to Austin. This time it’s Tesla.

So if you remember during COVID there were some challenges that Tesla had restarting one of its California factories. Assemblywoman, Lorena Gonzalez said F Elon Musk. He responded with message received. And then he ended up a few months later personally moving to Texas. I think he’s living in one of those mini homes next to one of his rocket launchers, or at least that’s the lore that’s coming out. But his company hadn’t decided to move. But this week at an investor conference, he said we are moving our headquarters from Palo Alto to Austin. So Daniel, I think what we should have a robust conversation on, is this the giant tech sucking sound from California to Austin?

Is this a temporary thing? Is more like a red versus blue? Are there some real reasons? I’d like to start out just with some comparisons. And also, I’ve talked to a lot of people who have made the decision to move, including Oracle, HPE, multiple VCs, and the most important of them, future research and Daniel Newman moved from shy town to Austin. By the way if you’re not from Chicago, you call it shy town.

Daniel Newman: By the way, this could be a full on Six Five special. We might have to come back for this one.

Patrick Moorhead: I just want to throw out a few things though. So this is a very complex topic because, and it all depends on the variables that are important to you. There’s a ChiefExecutive.net and they do a survey of hundreds and thousands of CEOs. And they pick the best and the worst states for business. They picked Texas as number one, they picked California as number 50. Okay. So that’s one rating. No, by the way it’s by CEOs. CNBC puts California more in the middle. They put in a lot of social justice issues and things like that, where California scores better than Texas, but it’s typically mostly about two things. It’s about taxes and access to labor. And in there, is the whole regulation thing. So let’s do a little bit of comparison.

I mean, California’s tax rate alone goes up to 13.3% and Texas is zero. California capital gains… By the way, I lived in California. So I can tell you even leaving California was tough as I was getting harassed by their tax board three years after I moved from California to Texas, just to make sure that I actually left and that I wasn’t actually doing any work in California. Capital gains taxes are taxes ordinary income, as opposed to long term capital gains on federal. That’s another thing. California’s corporate income tax is 8.8%. My Texas franchise tax is 0.75 percent. And the list goes on and on. You’ve heard of nightmare stories of people, even in cities like San Francisco, where it takes them a year to get permits, to change the façade or the overhang that want for their restaurants.

So again, you’re right. We could do this. We could sit here and talk about this the entire show but… And I also think it’s very city-based. So Austin has gotten… their housing has gotten 40% more expensive over the last year. Now they’re going to have to build that up which I know they will because we actually have land and we encourage buildings. But then again, we don’t exactly have a huge public transportation to get people to their work. That’s why in Austin we have the sub downtowns that are forming. They’re closer to where people work, like where Apple put their corporate headquarters on the north side of town. But Daniel, is this a blip? Is this a permanent thing? What do you think is going on?

Daniel Newman: Well, I think we’ve definitely seen a migration that will be followed by some very significant companies, right? Last year we saw Oracle come to Texas. Huge company, 400,000 employees. The main sponsor of the San Francisco giant ballpark. I mean, a company that’s been as rooted in San Francisco and in the bay area, as any company in tech. We saw HPE which always had a significant presence in Texas and Houston decided to uproot the corporate headquarters and move it to Texas. Tesla had… Really, this isn’t like… It was kind of brought up as another news cycle, but we sort of knew this was happening. I mean, after Elon received the message, he up and moved within like a month, started building another, was it gigafactory, a mega factory here. He bought a city to expand his space endeavors in Texas. And he’s a pragmatic guy.

He’s in a kind class. He’s a got bigger than life personality. But the thing about Musk is he’s also, he’s a business savant and he sees the financial benefits, the talent pool, the more affordable housing and says, this is a more realistic place to grow. A company like Amazon that does more hub and spoke. Pat, you and I went to San Marcos and saw one of their major locations. And now Amazon hasn’t moved their headquarters, although I have started to see some news popping up. Actually I just read one the other day about Amazon, maybe leaving Seattle, could it be for Texas? And my point though is that cities like San Marcos though, where you have people that need affordable housing, you have thousands and thousands of… That’s achievable here. And if you want to bring talent, it’s hard.

When I was looking at moving Pat, I wanted to move to a tech hub, because that’s what we do. And when you did the comparatives of Seattle, of San Jose, of Austin, Texas, Miami, by the way, picking up steam and momentum early. If you just kind of created the pros and cons for a business in the destination, Austin’s kind of got it all. It’s got the city, it’s got the sprawl, it’s got personality, it’s got a great corporate tax structure. It’s got good personal tax structure, great university system here in Austin, Texas. And on top of it, other than the heat for maybe a month or two, the weather’s nice for people. Year round, you can be outside, even if you’re a little hot. So, Pat I think this trend will continue. I think Austin’s got more growth.

It is getting expensive. So we’re going to have to kind of keep an eye on that. And of course, here we have to keep moving. We’ve spent nine minutes now or a little more on this topic, but this is a great one, Pat. And if you and I now are calling Austin home, Elon, welcome to Austin.

Patrick Moorhead: You know how to get ahold of us Elon.