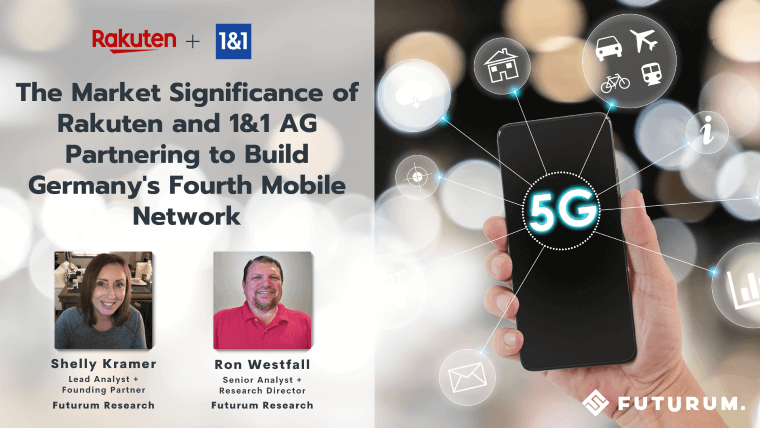 For this vignette of a recent episode of the Futurum Tech Webcast, Part of the 5G Factor series, analysts Shelly Kramer and Ron Westfall delve into Germany’s 1&1 selection of Rakuten as the strategic supplier for its 5G build. The discussion emphasized:

In sum, 1&1’s entry as a 5G standalone mobile operator, with Rakuten’s backing, can make an innovative difference and light the German market on fire in terms of the 5G race.

Ron Westfall: Yeah. This has definitely been a whirlwind. So not only did Rakuten purchase Altiostar, the same day, basically, they announced that they will be the strategic supplier for 1&1’s build out of a fourth mobile network in the German mobile market. So, today you have DT, Vodafone and Telefonica Germany all competing. One outcome was that 1&1 became a MVNO. So, they actually already have mobile networking experience reselling their service using, for example, the Telefonica and Vodafone networks. So, this is not going to be a complete stretch for them. Plus they already deploy fiber to the home, for example, and offer IPTV services, smart home services.

So, this is really going to be, I think, a shakeup of the German market in the same way that Rakuten is making inroads in the established Japan market. It’s challenging directly the Japanese incumbents such as NTT and SoftBank. So, this is going to be very interesting to watch, because they’re basically setting out to build, again, a fully virtualized cloud native 5G network. This is, I think, going to enable 1&1 to really differentiate themselves over the long-term and really make things very interesting in the German market, because they confuse it with their existing fixed access network, they already have, for example, 10 million plus mobile customers. So, their MVNO arrangement plus around 5 million fixed access customers. So, this is not something being done from scratch. This is something that is ready to go in many key ways and definitely Rakuten’s RCP technology, I think, will provide an innovative difference to light that market on fire in terms of the 5G race.