The Impact of Microsoft’s Massive Acquisition of Nuance 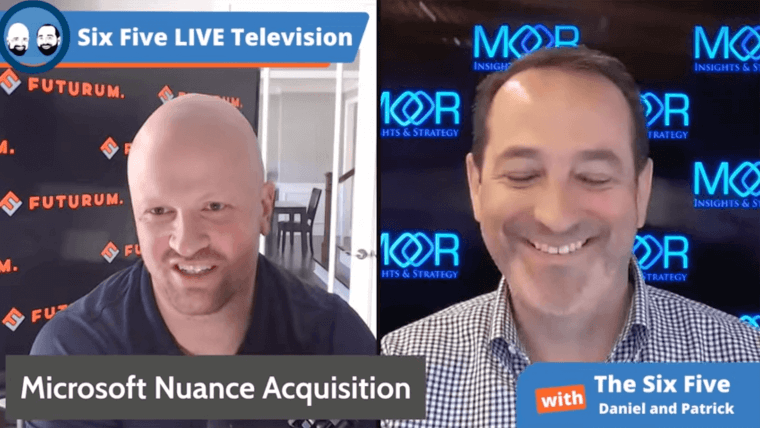 In this video take, the Six Five team discusses Microsoft’s acquisition of Nuance. What will this mean for the tech giant?

Patrick Moorhead: Let’s move forward, Daniel, to the next topic. Microsoft buying Nuance. My gosh, what is Microsoft doing? This is the second massive acquisition here in how long? Is this a new strategy for them?

Daniel Newman: Well, maybe they’ll close Discord next week and they can just go for … What are these? 11-figure deal of the week?

Daniel Newman: Pat, this deal kind of … Again, all the energy was around Discord. Everybody thought the next big acquisition was going to be Discord. Then all of a sudden on, I think the weekend, Bloomberg story broke about Nuance. Now, look, Nuance is not a company that hasn’t been on the radar. Apple has been looking at the company, Microsoft, there’s a series of other tech hosts. I went on CNBC. I talked about it with Brian Sullivan. It was funny. He kept asking me about all the value that someone could’ve gotten by buying this company a couple of years ago.

Right now the entire experience of going to the doctor and getting your interaction it’s so bureaucratic. It’s so administrative. You have no ability to sit and have a conversation because all the doctor does, right, they come into the room, they ask you a couple of questions. What do they do? They turn to their machine. They get on Epic and they start punching stuff into the system, right?

Ultimately, most of your interaction is with someone at a front desk, a nurse, and then you never talk to your doctor. What if your doctor could come in, interact with you completely naturally, you talk about everything and you used AI to be able to synthesize the conversation, have that data processed to enrich, to actually get clinical information, improve outcomes, and concurrently drive a much better experience? That’s what’s going on here.

You’ve got antiquated systems that do not communicate well with each other. Now all of a sudden the cloud applications that are regulated to integrate with Cerner and Epic, start working together. You apply conversational AI. That’s exactly Nuance is doing. You put all this together and in the end you have a key alignment. You’ve got a market and a TAM opportunity. Did they overpay? Is 16 billion too … Or sorry, 19.7 when you include the debt, is that too much?

Well, if they grow from 250/300 billion in their healthcare business over the next few years, it wasn’t too much. Real quickly, Pat, because I want to leave a little oxygen on this one, but I liken it to a little bit like when IBM bought Red Hat. Everyone said 34 billion too much. The thing was, is it wasn’t just about what Red Hat was doing in Red Hat’s revenue. What it was about was it was about buying a company that can completely legitimize a market that you see as a big opportunity.

Satya was more than clear that he believes this is one of the biggest technologies, AI, in one of the biggest market opportunities, healthcare. Bringing these things together and with Microsoft behind it, you know it’s going to grow faster than it was on its own.

Patrick Moorhead: When you’re worth $2 trillion, overpaying by a billion is almost a rounding error.

Daniel Newman: It’s like you and I leaving like an extra couple of dollars on a tip. I mean, come on.

Patrick Moorhead: No, no. I know. I think the most important thing is probably the impact to OPEX. I know that CNBC was even complaining about this being too low of a price, which sometimes you can’t satisfy that crew.

Daniel Newman: Same I thought it was too much.

Patrick Moorhead: I know, no, I know. No, I think this is a good tuck-in for the company. Microsoft is a trusted provider of healthcare solutions. My brother-in-law’s a surgeon. He’s been using Nuance’s tools for, gosh, years. I mean, I don’t know, a decade or something. He just swears by it and they work for him. Not a lot of value-add there, but Daniel, you added a bunch of it and it was gone. That’s good.