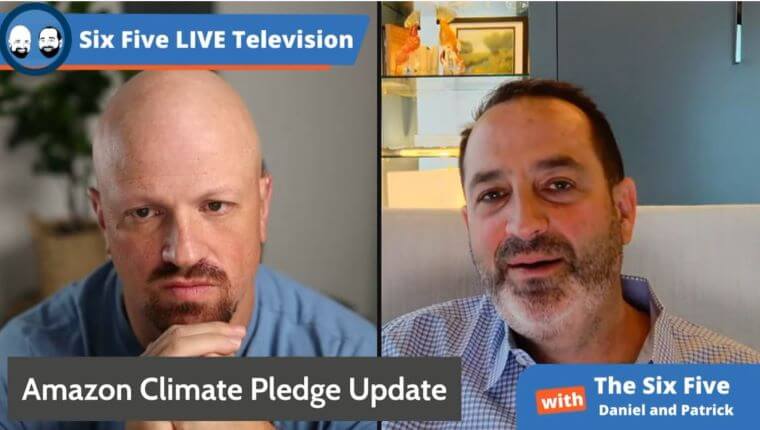 Patrick Moorhead: Let’s shift gears here into the Amazon Climate Pledge, a little background here, Amazon set up the Climate Pledge, which is not just Amazon, but Amazon plus other companies to be 10 years ahead of the Paris Accord, which it’s hard enough to hit the Paris Accord, but to be 10 years earlier than that seems really, really hard. And some of the big announcements here, I had the chance to talk with Sally Fouts, director of the Climate Pledge at Amazon. And I asked her some really tough questions. It was good to hear her explain why she’s doing certain things, why she’s not doing certain things. The big news was they got the 200 signatories.

And I always say, and Danny, we’ve said on this show to do anything related to climate change, it’s one thing to be in competition, which by the way, I think is good because it keeps competition’s always good and keeps people innovating. But in the end to really get off of center, it takes a village, right? It’s going to take multiple companies sharing best practices. And that’s exactly what the Climate Pledge is. And I asked Sally, I said, “Hey, why is it hard to get maybe information that crosses all of the signatories?” And she was very clear, “We want our folks to be focusing on, on execution as opposed to filling out forms.” And I was like, “Okay, I can go along with that.” And also, doesn’t put Amazon in this onerous position to be managing the whole thing. And I asked her about how realistic that they hit in 2040. One thing I appreciated about Dell and what they’re doing with climate is they don’t actually know exactly how they’re going to get there, which means they’ve made some commitments that are going to require some innovation to actually get there.

And I got a similar type of response from Sally, which I appreciated, but she seemed very confident that Amazon and the signatories can get there 10 years early. My final question I had for her, which she appreciated, and again, we’re not journalists we’re analysts, but you have to ask the hard questions. I asked her, “Hey, what about claims that Amazon is greenwashing or using the pledge as a marketing tool?” And she was very clear. She doesn’t have time to respond to things like this. She has to focus on executing. She likened any time that she applies to playing defense on stuff like this, Daniel, you and I have talked about how some of the press out there is really out there to make Amazon look bad. Why that’s a smart move for her, not to just jump in and defend every single thing that people are picking at her.

Daniel Newman: I think you bring up a good point there. Look, it’s okay, we live in a society that embraces capitalism and it’s okay when good and profit are, there’s some interdependence companies need to make money. They need to be profitable in order to function, in order to hire people, in order to innovate, investments in R&D. And so I think sometimes we get a little bit confused societally about the fact that the two things need to coexist in order to continue to push the boundaries on how the fact that a company like Amazon can help drive 200 global companies to become signatories is because it has resources to deploy globally, to focus on this. We need enterprise. We need enterprise to solve a lot of our most complex challenges. People want to pick on the billionaires doing space travel. And yeah, there’s something sometimes ironic about some of this stuff.

But if you look at our next wave of space travel, it’s going to be driven by innovative thinking companies and billionaires that have the time to put into this. It’s not just about getting to space first. That’s the smallest thing. It’s about leaving a legacy, leaving the world better than we came into it. And I think that’s part of what a lot of this is about. So we want to accuse of greenwashing and posturing. I love that you asked that question, Pat. I think that’s a great topic. I think if companies can do good for the world and for society and concurrently, make the profits required to be able to continue to invest and do more good for society. I am all for it. This particular announcement, Pat, by the way had some really, really impressive names behind it. Companies, by the way that you and I talk about here. HP joined. One of my favorite, by the way, coffee, little machines, Nespresso joined, we saw Proctor and Gamble.

If you don’t know who Procter and Gamble are, you probably use some of their products because, you use Gillette razorblades because … I actually think I need to right now. But yeah, so I mean, it’s a great announcement. I have been very bullish on the large enterprises investments in sustainability and ESG. I’m glad to see they’re doing it. I’m glad to see they’re putting their dollars behind something positive. And I hope that the world can grow to appreciate these investments because largely we need these corporate and government partnerships to be able to take us into the future. By the way, Pat, as a segue to the next topic, another name that found its way onto the sheet as part of the Climate Pledge was Salesforce.