The 5G Factor: Update on Qualcomm and How the Company is Driving 5G Innovation 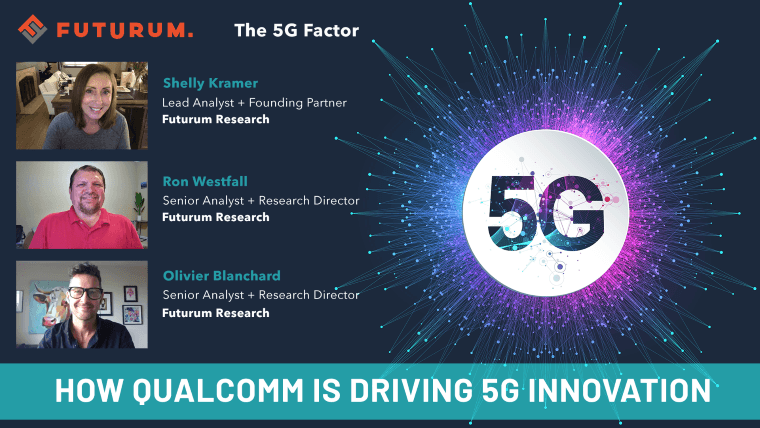 In this vignette from a recent episode of the Futurum Tech Webcast, part of The 5G Factor series, analysts Shelly Kramer, Ron Westfall and Olivier Blanchard discuss how Qualcomm is driving 5G innovation with an overview of what the company is doing at its corporate headquarters in San Diego, testing and demonstrating new developments in 5G, efficiency, techniques, methodologies, equipment, and more.

While most people are aware of the Qualcomm products like its Snapdragon Mobile Platform and other Snapdragron-related products that are in most mobile devices, not very many people are actively aware of the research and development that Qualcomm is doing in the 5G space. Qualcomm is one of the largest companies in this very rich ecosystem working with others to move the industry forward and is innovating at lightning speed. This is an area covered very closely by Olivier Blanchard, and in this short conversation, Olivier shared insights on a few new things that are coming down the pike in terms of private 5G networks. These include:

All of the above have huge implications for Industry 4.0 clients. Check out Olivier’s insights here, his take on what Qualcomm is doing for the advancement of 5G and what’s likely ahead.

Shelly Kramer: Absolutely. So, for our viewing audience, I want to make sure that everybody knows that Olivier Blanchard is not here just to be eye candy. His involvement in this conversation is key. And I feel like it’s impossible to talk about 5G and innovation and what’s now, and what’s next and all of the exciting things happening, quite honestly, without bringing Qualcomm into the conversation. And that’s really… Olivier spends a lot of time immersed in all things Qualcomm. And I know, Olivier, what the company is doing in San Francisco, with its corporate headquarters is all about testing and constantly demonstrating new capabilities and all different kinds of things. Talk with us a little bit, if you will, about innovation and how Qualcomm is driving that as it relates to 5G.

Olivier Blanchard: Yeah. So there’s a lot of stuff going on, and I’m only going to mention like a tiny, tiny little sliver that’s relevant to this conversation. I’m just happy that I’ve gotten to the point now where I can listen to Ron, and understand everything he said.

Olivier Blanchard: It wasn’t always so, and now I understood everything and it all makes sense and I’m very happy about that.

Shelly Kramer: And you know what’s really crazy? From my point of view is not only have I been able to understand what Ron is saying, I actually can speak about it and know what I’m about. And so I feel like personally, I’ve made great strides as well, with Ron as my mentor.

Olivier Blanchard: Yep. Yep. I’m in the same boat. Okay. So Qualcomm, so one thing that a lot of people don’t… Well, most of what Qualcomm does, people, excuse me, don’t necessarily have visibility on. Because I think we’re aware of the Snapdragon mobile platform and all of the Snapdragon related products. We’re aware that they have really good modems and that they’re very active in R&D for 5G. And they contribute to a lot of the standards and so on and so forth.

But something that as an analyst who’s been following them for a while and being pretty immersed in their universe, there is something that I’ve noticed is that they have these testbeds, essentially, these warehouses where not only do they test new technologies, new techniques, new methodologies to optimize 5G networks and all of the equipment that goes with it, but they also use them as demos. And so their demos for industry partners, obviously Ron has touched on the fact that this is a very rich ecosystem of companies, on the one hand, competing against each other, but also all working together because there’s so many layers to this and so many moving pieces that they all have to put all the pieces together for their clients, for their customers.

And in the case of, of private 5G networks, that adds a few more layers of complexity on the front end, because you don’t just subscribe to a service that a carrier has provided for you, you have to build stuff from scratch. And so these demos are always out there and periodically, Qualcomm will update the market on what’s new. And typically there’s an analyst day, there’s usually one or two a year, where they bring tech, journalists analysts, and some influencers even, to their headquarters in San Diego to tour some of these testbeds and see what’s going on and actually see it live.

And with COVID, and travel being restricted for the last year and a half, that has moved to a more virtual presentation. And I think that some of it gets missed because there’s just so much news out there and so much churn. And so many of these companies doing stuff like this now that a lot of our audience may have missed some of what’s been happening at Qualcomm, and what’s coming down the pike in terms of private 5G network. And especially for Industry 4.0 applications. So I’m currently writing three pieces on this, which will publish on our website in the next week or week or so. So look for that.

And so for instance, one of the things that attracted my attention when I was doing research on all these new testbeds, is that Qualcomm is already working on optimizing a thing called TSN, Time-Sensitive Networking. And what that allows industries to do is provide microsecond level synchronization of all their devices. So imagine that you have a warehouse, a modern warehouse with robots essentially driving things around, you don’t go to the shelves anymore necessarily, the shelves can come to you. So, you’re an Amazon warehouse, it could be any warehouse, any sorting center where you’re going to have automated guided vehicles, this micro Time-Sensitive Networking, microsecond level synchronization allows all these things to work better in concert. So that the level of complexity that’s, that’s required for everything to work together so things don’t run into each other, so you don’t have problems is improving.

Also, what I’m seeing is a push for Sidelink capacity. So that allows the devices to not only talk to the network in real time with very low latency, but also talk to each other. Which I think is a really important layer when we’re talking about private 5G networks, especially in Industry 4.0.

Olivier Blanchard: And there’s also indoor precision positioning, which is also getting super, super good. So you have centimeter level accuracy to be able to track all of your AGVs, your automated guided vehicles in that environment.

But also something that, that we don’t talk about enough, I think, in terms of 5G network optimization, is power consumption. So we talk about power consumption in the IoT in terms of the device itself using low power so that it can run a lot longer on the same charge, but we’re also now starting to see 5G networks become optimized for, essentially become greener. And so some of the testbeds that I was researching show new methodologies for end-to-end system techniques that can compensate for power amplification issues, especially nonlinearity, that’s a tough one to say for a Frenchie.

So essentially what it does is it creates new optimizations for networks. And especially this is going to be very useful for private networks where every ounce of power counts. And it’s also a huge cost issue when you’re running a plant, or whether it’s the plant itself or the network that you’re running through the plant, networks are able to become a lot greener now through these optimizations, through these new power efficiencies. I was working on all this stuff. They have really interesting things to share. And so look for three articles on this in the next couple of weeks from me.