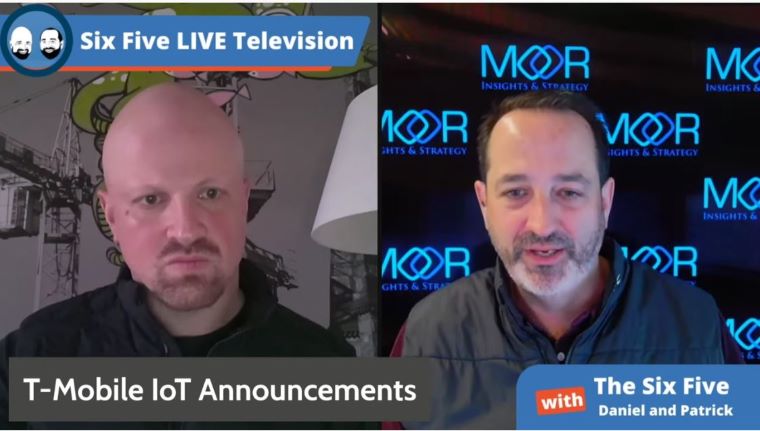 Patrick Moorhead: So let’s get into our last topic and that is T-Mobile did an announcement for IoT. What a lot of people don’t… Well, first off, T-Mobile, I would say, in the US, is recognized as a consumer play. What not a lot of people know is, though, is when they acquired Sprint, Sprint had a very robust B2B play. And since the two companies have come together, you’ve seen these superpowers unite. You had some product announcements that were out there that I thought were really cool. They have their own platform for collaboration as well. They’ve done a partnership on that one.

But here is an IoT announcement. And if you stand back and you say, “Well, wait a second. T-Mobile and IoT?” Here’s the thing when you’re doing an international IoT roll out, let’s say, it’s global. In this case, let’s use Deutsche Telekom or Telekom as it’s known, because it’s all throughout Western Europe, you typically have to piece part the access together. You can’t just go to one vendor, which gets super complex.

So you can imagine, it’s hard enough to your solution going. You actually have to have the IoT devices, you have to have the IoT services, and you have to actually crank on the data to do something useful with that IoT application. But what’s happening is you can go to one customer and get service across 188 destinations, 383 different networks worldwide. You’ve got a single account team. You have a single bill. And I think this is pretty awesome for a multinational company trying to do in a global rollout of IoT.

Daniel Newman: Yeah, absolutely, Pat. I mean, look, it’s a very interesting participation to have T-Mobile jumping into the space, it’s diversification, but we’ve seen this from the other vendors. They’ve all sort of been dabbling. We saw it from AT&T. You’ve seen it from Verizon. I think T-Mobile has just been uniquely more successful at executing over the past few years. And it’s been visible in their growth, in their results. The transition from Legere has been okay. I was not sure how that would go. It’s actually gone quite well. And the company continues to innovate, both on the business end and on the consumer end.

And of course, full disclosure customer and we advise this company, but I feel like every week, Pat, there’s another announcement. There’s something else interesting coming from T-Mobile that continues to fill in the portfolio. A lot of good partnerships on device side, but also, like I said, on the business and the business technology side. I think they’re going to do very well. This is one more feather in the cap type of announcement.

Of course, we got to see how it pans out, hear how this is adopted in the market, and what kind of growth it gets. But big thumbs up. And like I said, it’s interesting, Pat, to see all these announcements drop this week, I guess maybe there’s a reason. There’s an event going on that’s really centric to carriers and 5G, but a whole lot of announcements, Pat. It feels, like you said, we got a lot of the show before the show.

And of course, you and I, give us a lot of props, because we’ve been pre-briefed on a lot of stuff that’s going to happen this week. And I think we made it through this entire show without slipping on any embargoes. And that’s risky to do the show live when you’ve been presented so much of what you know is going to come out, but sign of experience, professionalism, or just dumb luck?