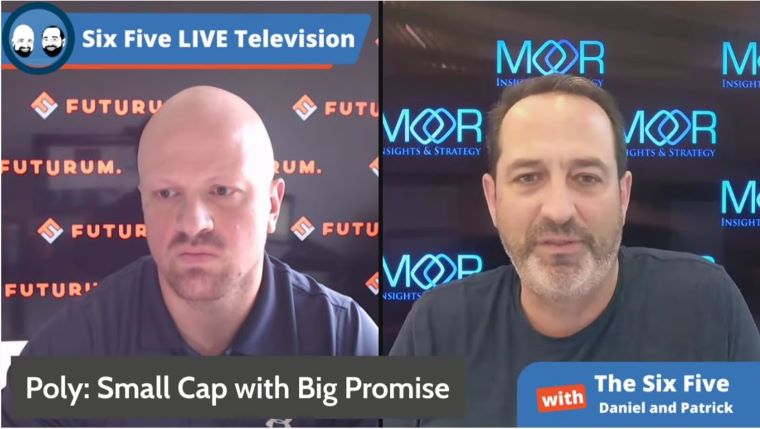 The Six Five team dives into Poly and their strong Q1.

Patrick Moorhead: So Daniel, let’s move on here to Poly. And I’m going to take this one. So if you’re not familiar with Poly, Poly is the former Polycom and they are … I would call them the industry leader in non-industry specific video and audio equipment.

What do I mean by that? Cisco devices run Cisco WebEx. Poly products, which by the way, my camera and my microphone are Poly right now, the P15, they run a myriad of services like Zoom as one of them. They play nicely with companies like 8×8 and also with Microsoft Teams. So that’s where we are.

So I felt like Poly came out with really good earnings. There were above guide on revenue. Revenue was up 20%. And they were also above guide on EBITDA and EPS. Video was up 94%. Audio was up 34%. In a call today that we had with Dave Shull who’s Poly’s CEO he told us that his newer video products, I think, Daniel, he said it was up 260%. And that is really good news.

Well, why the sell off then? Well, gross margin was off 520 basis points and they can’t get nearly the amount of product that they need because of that. So their PPV, which is basically the variance in price between what you had forecast and what it was, they got hit with big time. And that’s the fancy way of saying they couldn’t get the chips that they needed to make enough products quickly enough.

One little hint that was in there as well that wasn’t in the deck but was in the press release was that they signed an OEM agreement with a global PC manufacturer who’s going to do pro grade headsets. And I need to go off and do the search of it, but it seems to me that it’s a Lenovo. I could be wrong, but I need to dive into this.

But all in all, listen, Poly is in the right place, which is I would say digital transformation of collaboration. Oh my gosh, that sounded like such a marketing term, but they’re doing it in a way that I feel that businesses want. And that’s that not to be linked into one specific codec or one specific service provider. Anyways, good job Poly.

Daniel Newman: Yeah, that’s a great one. I’ll keep it moving. Your coverage there was fantastic. You ripped through the whole thing really, really well, Pat. The company is really well positioned. Its ecosystem and its partner extensibility is really what I like about it and why I see a big future for it. Hybrid remote work. It’s not going away anytime soon.

The virus in itself wasn’t the only reason. We just identified how much more productive we can be when we’re not constantly commuting and companies are investing in that. That company has a lot of great products. It connects to really every brand, Microsoft, AWS, Google, Zoom, RingCentral, Five9, 8×8. You name it Poly has a piece of hardware that can peripherally connect to it. And we need that. Everybody wants to build a full stack. There is a place.

So why did I say small cap, big promise, because Poly is very well positioned. Its hardware sits in the right places and I see a good long-term trajectory for the company as long as it can keep track of its supply chain, get the parts and pieces it needs, and stay closely connected and become a more and more integral part of all those partner relationships.