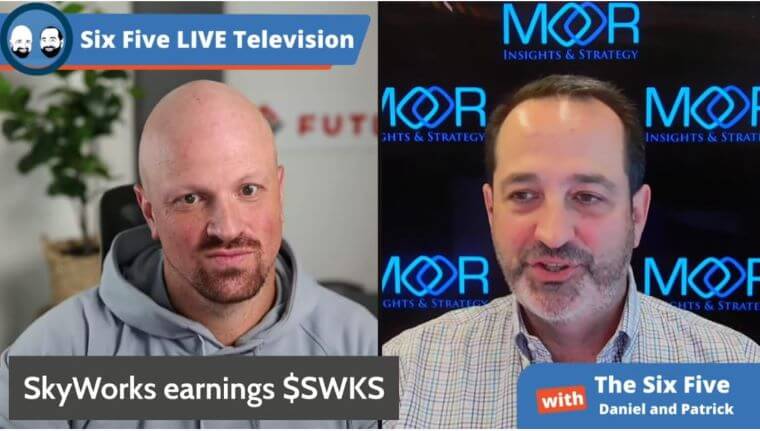 The Six Five team dives into the latest earnings report out of SkyWorks.

Patrick Moorhead: And, let’s move into another company and that’s Skyworks that we have actually never talked about on Six Five Podcast. And I think it’s a good time that we start. So let me talk a little bit about the company. First of all, 5 billion in revenue, the 31% IBIT. Okay. So they’re taking a lot to the bottom line and they’re very focused. They’re an analog company. Okay. You pair with a digital solution like a 5G modem, a 4G modem, Wi-Fi 6, GPS, Bluetooth, Zigbee, Laura. They are the front end for smart phones. IOT devices automotive and infrastructure from companies that we talk about like Ericson, Nokia and Cisco. They do 7 billion chips a year, 20 million chips a day. And one very unique thing about the company is they’re vertically integrated, okay?

They actually do their own wafers, which is unique. They have their own manufacturing. Most people just have designed and they do PAs and filters and assembly and tests, so they can scale. And that’s a real benefit here during this supply chain crisis. So they came out with overall 2021. And they grew top line 51%, which is absolutely incredible. And it’s fun that we, two massively growing companies like Qualcomm and Skyworks talking on the same day here. They’re customers, we would know their customer, their biggest customer is Apple. Okay. In 2020, it was 50% of their revenue. They’re trying to not be a one trick pony here, but in the iPhone 13, they’re the analog front end alongside the Qualcomm X60, and the Qualcomm Transceiver.

They’re on Amazon, Google, Samsung devices, Microsoft, NETGEAR, GE, Honeywell, and Northrop. So that’s a little bit of the background of the company. I talked about how they did for the 2021 52% revenue growth, EPS was up 71% and they also are looking to double digit Q1 sequential growth in the first quarter of next year. Daniel, I know that’s a lot, but I had to get in the, not many people have heard of Skyworks. So here we had to explain the company. I mean, they’re definitely not a household name. And quite frankly, it was a challenge even getting through their earnings. I had to go to the transcript to get to a lot of the key data. There’s no presentation, they don’t break out businesses. It’s tough.

Daniel Newman: Well, Pat, I did spend a little bit a time reviewing and looking through it to make sure that I would have something intelligent to add to this, because I don’t track Skyworks as closely. But even though we did just talk about Qualcomm is the leading mobile RFFE. Skyworks has an impressive portfolio, has an impressive client list. Just looking at some of the company’s highlights, Pat, I think it’s worth just reiterating what you mentioned. I mean, they’re working with the Nokia’s, they’re working with Cisco, they’re working with Amazon, Comcast, Samsung. It’s said in their highlights, they’re working on supporting autonomous driving and in market, leading robotaxi vehicle platform, couple of ideas who that could be. And those are some very, very significant names. Working on the control units systems for tier one European automotive OEMs.

This company is in a lot of places it’s attached to some very important transformational trends whether that’s going to be smart vehicles, whether that’s going to be 5G handsets, all kinds of different connectivity, IOT. And Pat, they make a lot of money and they pay a pretty nice dividend, a 56 cent dividend, which was approved this quarter. So, for the investor audience that sticks with us, it is a company that probably warrants some attention based on some of these trends. If you’re following trend lines like autonomous vehicles, if you’re following trend lines, like 5G, this is a company that’s there that’s helping and supporting, making it happen. Like you said, they don’t have that full digital two analog, but on that analog side, very complete portfolio, impressive vertical integration.

Patrick Moorhead: Yeah. The final comment I’ll make about wasn’t included in the numbers was a lot of the acquisition of the RF side of Silicon labs that really expanded their footprint. I talked to the company last night and asked them, who are they taking share from? And they were really, really sharp to say, “Listen, it’s a growing market. And the amount of content in our solutions is growing radical versus 4G.” And when you attach that to things like Wi-Fi 6, where they’re a major player on the infrastructure they have a lot of growth to go. They did mention that they are probably taking share away from some of the lower cost Asian manufacturers. I couldn’t get them to name any, but those who couldn’t make the turn to 5G or Wi-Fi 6E. I mean, Wi-Fi 6 interestingly enough has some complex RF as well.