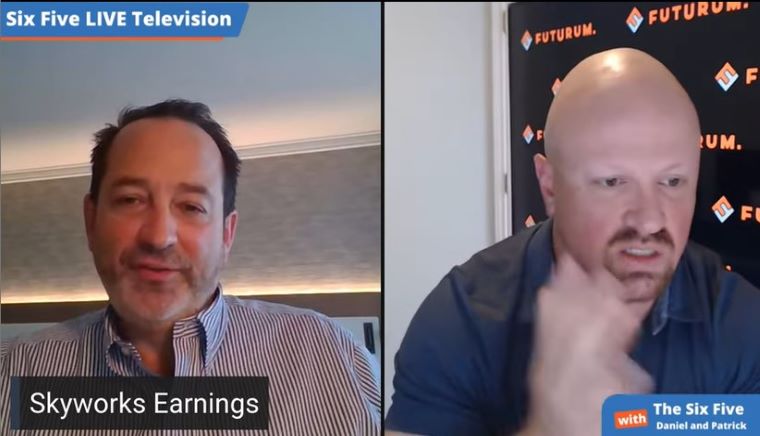 The Six Five team dives into Skyworks’s earnings on the second episode of Earnings Palooza!

Patrick Moorhead: Exactly, exactly. So Skyworks doesn’t do as much marketing and promotion as a lot of these other chip makers. So I thought it’d be helpful for our listeners just to get a little bit of a background. First of all, it’s all about analog, okay? Analog RF and also power. And if you know anything about analog, and I don’t, I’m not talking to you, I’m talking to the audience, you know that it’s black magic basically. Okay? There are less people who get RF and power analog devices than there are people who do graphics. And graphics is a black magic as well. 11,000 employees, 17 countries, they have their own manufacturing plants, Daniel, which people just completely gloss over. And in times of need, they had the silicon. In times of bust, they’re able to shift things around. And when you have your own manufacturing, there are tricks you can play with flow that truly allow you to differentiate yourself.

And by the way, if you look at the content in a Samsung mid-range phone, their content is actually going up between 4G and 5G. And if you look at a tear down, Daniel, they’re sitting right next to Qualcomm. And I’d argue in some of these phones, Skyworks has more RF content in the smartphone than Qualcomm does. So Qualcomm gets the message out more, but we can’t forget that there’s somebody else in this hunt. So how do they do, Pat? Let’s get to the earnings. Talking to myself, that’s scary. Record revenue. Record revenue. How about that? There are other companies that didn’t have record revenue in RF and great earnings diluted EPS of almost two bucks. So actually three bucks on a non-gap basis. And it was very clear and very simple what it took them to get there. So first of all, they managed China really well in comparison to their competitors.

They bled inventory down, they did the double take when they saw orders that were gigantic in China. And at least for the mid-range in China, that market is way down. And in fact, even premium market is down. So wait a second, why did Qualcomm do so well in premium? Well, they took out people like Media Tek, who were in there. So it was a compete on the digital side as opposed to the analog side that we’re talking about. So great performance, diversifying almost half of their revenue, around 40% is outside of smartphones. So I would say that they’re almost fully diversified. But anyways, I’ll kick it over to you buddy.

So we’ve done a lot of victory laps for Qualcomm and their success in mobile RFFE. But Skyworks has a comprehensive RF offering and they’re winning it in a lot of different markets and that’s driving good results for the company. So, I think they’ll struggle to win the top of the market, I think Qualcomm will continue to have, make their hay in that space basically because of everything else Qualcomm does in that space. You can’t deny that this company’s doing a good job in playing in the right spaces and building the right ecosystem, Pat, so I don’t have as much content on this one, but let’s just say my overall impressions from reading through the numbers and the results is that they’re heading in the right direction. It’s also an indicator that 5G has a lot of growth to go. And despite the fact that many people are kind of saying the consumer market device market is going to get smashed, people are going to want to upgrade to 5G devices. And that’s not just phones, that’s 5G everything that’s going to enable greater connectivity. So decent, solid from Skyworks Pat.