SAP Pulls Completely Out of Russia 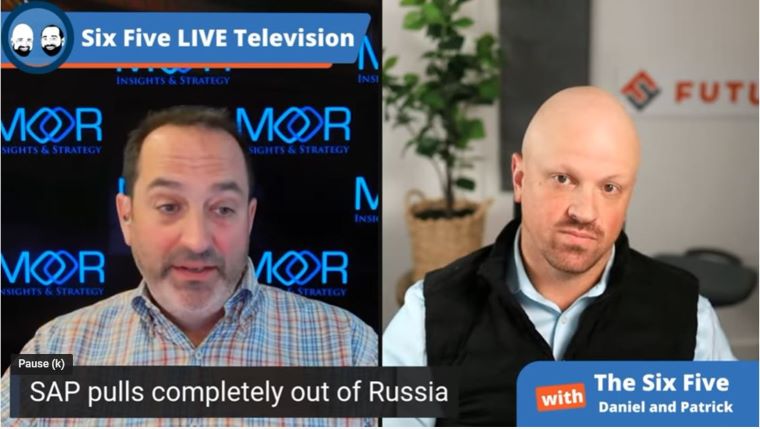 The Six Five team dives into SAP pulling out of Russia.

Daniel Newman: Absolutely. Let’s talk about the situation in Russia, because SAP put out a note this week. They sent out a press release kind of talking about that. When they were pointing to what their shortcoming was for the bottom line, that was a lot of Russia related talk.

Patrick Moorhead: Yeah. I mean SAP was doing very similar things that at other companies in their class were doing, but I think they were getting more heat because they’re a German company and there’s a lot of heat on the overall German government on the amount of military support that it’s giving Ukraine. It’s kind of been a huge story, less so in the United States, but more so in the EU This was SAP’s definitive statement, first of all, that it’s supporting Ukraine and all the government sanctions. It always has, but this is essentially a complete and orderly exit.

I mean, think about this, if you’ve been service a customer for 30 years and literally the shit hits the fan, you really have to think through a pullout. It can’t be some crazy thing. You might be shutting down a hospital. You might be shutting down a grocery store. I think when you look at the big picture, I don’t think anybody can say it’s a good idea to leave anybody in any country at risk of food or medical or anything like that. Maybe you’re going to take down a power grid. That’s just not cool.

So SAP really had to think about this. So first off, cloud services. They are shutting down all cloud, a complete cloud shutdown, and they’re giving their customers the choice to delete the data, to have it packaged up and sent to them. What these Russian customers go to, right, they can’t go to Oracle. They can’t go to Microsoft. They’re out of SAP. I don’t quite know what they’re going to do.

On the on-prem products, they announced exit to support and maintenance of all on-prem products in Russia. This is a big deal, and it doesn’t come at a zero cost. In fact, let me pull up the numbers here. In their earnings call this morning, SAPs total Russia shutdown, 300 million Euros in annual revenue. There’s going to be one time, 80 to a 100 million Euro one time charge, and overall a $350 million non IFRS profit hit, and non IFRS RS is like non gap here in the United States. It’s going to leave a mark. Some countries do very little business in Russia and it was on the edge. Maybe it was one application, not a big deal. They’ve been operating for 30 years, powering hospitals, manufacturing plants, food processing, and things like that, but they’re taking a pretty big annual hit, but you have to. I give them credit for doing this.

Daniel Newman: Yeah, absolutely, Pat You hit a sub theme that I want to mention. I don’t think I need to beat the drum really hard, but we conflate things a lot as a society. Causing economic harm to Russia to slow down its military actions and to make Vladimir Putin think about his continued strategy to inflict this war in Ukraine is one thing, but there are a lot of citizens in Russia who have nothing to do with this. There are people that are running businesses. There are families they are trying to feed. I mean the broken supply chain, we could have extended famine. You listen to the all in, and I do, talking about the food insecurity risks that are being created right now in the world. SAP is a backbone of businesses, large and small in almost every industry.

They break into more than 25 different industries. Everything from agriculture to mining, and these companies people are just like us. They’re just people that are running businesses that are being basically penalized because of the actions being taken by a regime. A company like SAP being thoughtful about this should not be the victims of activism for a negative approach because they’re trying to do something gradually and thoughtful for those non sanctioned companies. Again, they’re splitting this up between companies that are being specifically called out for participating in this war and participating in harm that’s being done, and every other company. It could be restaurants. It could be manufacturing companies. You mentioned, Pat, it could be hospitals and banks that enable people to get access to money to support their families.

So anyways, it’s a bigger story and I’m glad you called it out. I’m glad we took the time to talk about it because the fact is, they’re trying to do this in a way that’s thoughtful and compassionate and empathic in a world where we’re very binary right now. If it’s in Russia, get out. It’s one thing if you’re McDonald’s like, yeah, we’re not going to sell more cheeseburgers there. It’s another thing when you’re saying that the local school district that depends on SAP for data in the back is not going to be able to run or pay its teachers anymore, or run maintenance on those facilities because it’s basically taken their entire systems down. So I’m glad that, again, nuance people, nuance. I think one of the themes of this show, nuance.

Patrick Moorhead: I wonder how many millennials and gen Z who look at this stuff have ever worked in a factory before, or done something. Do actually understand how real businesses is conducted? Maybe that’s my old man, get off my lawn, point of view here. But I think every kid should work in a factory to see how things actually work, get their hands dirty a little bit.

Daniel Newman: Yeah, when I started working, my dad owned a trucking company. He made me work on the dock and I had to work in the yard of the trucking company. I picked up trash. That was my first gig. My second gig was unloading and loading trucks on the dock. I wasn’t the one driving the forklift. I was the one that all the stuff the guy on the forklift didn’t want to do. I can tell you it’s real work.