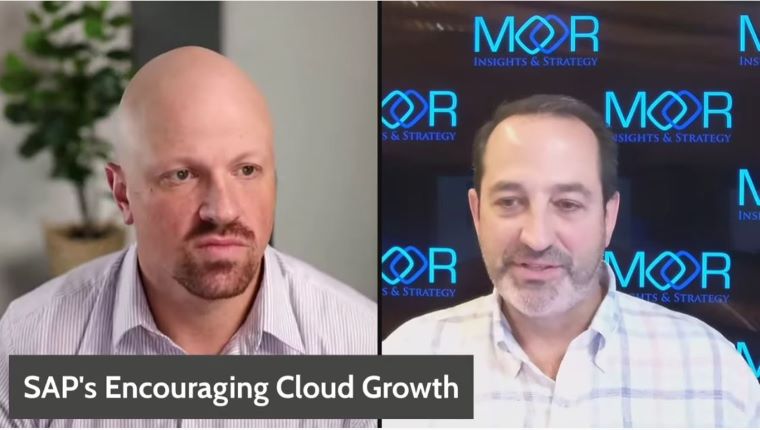 Patrick Moorhead: SAP had a really good quarter, and it was super encouraging. A huge surge with Rise, but let’s focus on Cloud. 24% Cloud backlog and even S/4HANA was up 60%. Now, I know I’m talking backlogs and not revenue, but with a company like SAP that matters. Now raw cloud revenue, real revenue is up 20%. And that’s super encouraging, Daniel, because SAP is not looked at as a cloud company, and it’s because they don’t have an IAS, but it is funny, when you look at… Well, and they don’t have a SaaS service, or SAP as a service, they work through partners.

And in the end, I think SAP realized what they could do best, which is what they’re doing. And then let’s leverage best in breed IAS companies to be able to deliver their services. And we can pick apart the strategy, what we think about that. I believe that they’ve been pretty beaten up over the past couple years, because, quite frankly, if you’re not laying down that big CapEx to build out your own huge cloud capabilities and you have to work through partners, it’s going to take some time for revenue to kick in. And the other thing is, most people with a major SAP installation aren’t quickly moving it. Moving their front end website or something, right? Most people don’t want to touch ERP and other elements of the stack because they’re an entire ordering system, their factory systems, are dependent on it. But net-net, I think it was an excellent quarter across all financial metrics.

Daniel Newman: Yeah. I think the company, early in 2021 they announced something called Rise with SAP, and it’s not so much a new product, but the company, I think, recognized the significant challenge it was having in moving its customers from prem to cloud. And so basically, Rise was all about the initiative to really help customers standardize their transition, simplify the bundles, create single contracts with SAP. So yes, there are partners, but as far as the consumer, or the user, or the business, the enterprise is concerned, they’re consuming it like the cloud. Managing SLA, operations, issue management, not having different contracts for everything. I think that’s where Rise is really starting to pay off for the company. And that’s what’s starting to show up in this quarter’s numbers. As you mentioned, we just came off talking about growth. We talked about IBM’s requirement for growth.

SAP, I think, was in a similar sort of holding pattern, where they were constantly being scrutinized. Are they getting people to cloud fast enough? And I think this is the number. I’d say this isn’t pure science, although it is data point, is that 20% number, because again, when we’ve listened to the growth numbers of Oracle’s Cloud, and NetSuite, with Dynamics 365, Salesforce as a mature product still tends to be in that high teens, low 20s in their core products every single quarter, and those are cloud native applications. SAP growth, of course, what I like about the company, and I think they put it in their number. It’s in a little asterisk, but it’s 77% is what they call more predictable revenue. That’s sexy. I mean, look, a company that’s 77% of the revenue that they’re booking quarterly basis they know that’s something that people are very encouraged by.

Oracle has a similar number. It creates a very stable environment for investors, it’s stable for the companies to know that the revenue is there. The other thing is, they’re raising their guidance, they think their profit outlook is good, and that backlog, as you mentioned, it really has a lot to do with the… It’s not backlog like hardware, it’s a little bit different than that. This is more about fulfillment of subscription. And some companies refer to it more as like ARR. And so what’s happening is, they’re growing the amount of annualized recurring revenue that’s going to come in. And as they pivot off of licensing and traditional software agreements to this cloud base, it tends to be a value creator for the company because the stability of cloud, and by the way, the profitability of cloud is higher.

Perpetual licensing is better up front, but I think every company on the planet has moved to consumption in cloud, because in the long run, as you grow, you do better. And just ask Andreessen Horowitz when he did the assessment of public cloud, how that actually works. It starts off, the pendulums on one side. As you grow the pendulums on the other side. But what you ideally create is a balance in the middle where you’re paying a little bit more for the reliability, stability, the flexibility and agility that you get from the cloud. So good quarter for SAP.

Patrick Moorhead: Yeah, it’s interesting. My biggest question long term is, can SAP reflect what Microsoft and Adobe did, which very, very good businesses. 10 years ago they were reviewed as the absolute leaders. And gosh, even back in 2000, my company, AMD, was using SAP. Can they make that turn? And I think, as a service, it’s all about cloud. They do have some SaaS services in there as well. And it’s all about software that is subscription versus straight licensing. A great analysis.