SAP and Honeywell Team Up 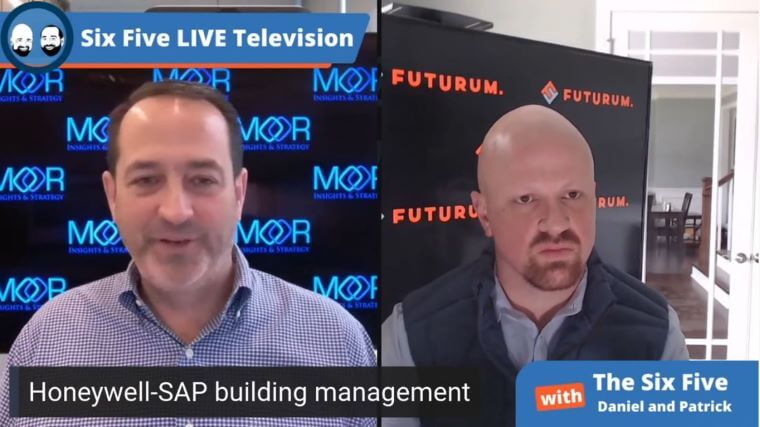 The Six Five team discusses the recent partnership with SAP and Honeywell on a new Real Estate software deal to bring ERP analytics and building analytics closer together.

Patrick Moorhead: Yeah. I just jumped right in there. Sorry about that.

Daniel Newman: Yeah. No biggie, man. I was just going to say, big announcement, Honeywell and SAP announced a big partnership calling it FREO and you wrote a great piece on Forbes about it.

Patrick Moorhead: Yeah. And you wrote a good piece on Futurum as well. And it’s funny when I think of FREO, for some reason, I of a topping, like an ice cream, but it is not ice cream. It actually, it is a building management solution. Let me step back. About 10 years ago, when I started my firm, we did a segmentation analysis of the internet of things and we segmented into four quadrants. But one of the key things that we talked about that now kind of gets taken for granted is that we need to have the connection between OT, which is the operational technologies out there, which are the HVAC, security systems, elevator systems, all those systems, oil refinery, stuff like that. And IT, which the computers, the data centers, the information, and it was novel then, it’s not novel now.

But what’s cool about this is you have Honeywell who is dominant in OT and are adding IT with their own EPM platform called Forge. And EPM is essentially a fancy acronym for being able to manage your assets in a positive way, an impactful way. And you have SAP, which is clearly IT and a company that has many of the large manufacturers. Many of these companies, large companies who have been leveraging SAP for decades. We had SAP at AMD where I was at my gosh. I think we even had it at a Compaq back in the day. But these two companies have come together to put their collective efforts, combined superpowers to build out a building management solution. And there were without getting the details, you can read our columns and analysis, but they’re enriching each other’s data in different types of solutions related to building management.

And you can just picture, if you’re a company and use SAP, you know the data that you have and if you have Honeywell and you have your OT systems, you know what data. And they’re even enriching that data with Qualtrics data, which didn’t get a lot of play in the announcement, because this was a Honeywell in SAP, but this Daniel, is the instantiation, the reality. When we talk about the industrial IoT, this is what it’s really about connecting IT with the OT to make a real business impact.

Daniel Newman: Yeah, it was a big announcement, Pat. Great coverage here. Like I said, your article really hit it home. We’ll put it in the show notes so people can read up on it. We’ve talked about Honeywell a few times on this show and specifically about Honeywell has transitioned to be more and more of a tech company. These are these pivotal moments where the company is showing that it’s putting its money where its mouth is. It’s the leadership of the companies, both Honeywell and SAP got together, said they want to do something strategic together. Settled in on this real estate opportunity. A couple of things I think that really are worth pointing out. One is building a simple to integrate standard solution that can be deployed in a matter of a few weeks that enable companies to take both that IT OT data that we always hear about, implement all of it to improve the performance of their building management systems.

The second thing is Honeywell Forge is able to be layered upon various building management systems. And this is the way it’s set up to run at the edge. You don’t have to be a Honeywell smart building, you have to be a smart building with different sensors and data that can come in. Honeywell can sit on top of that and then you can take all that data, plug it straight into SAP, run it together.

Third, is SAP is in a pretty big transition right now from prem to cloud. It’s not gone extraordinarily fast so Honeywell was very strategic here as well to find multiple integrator partners that could take legacy prem based SAP, which still is a large percentage of the deployments and enable those customers to quickly plug in and connect to this a FREO solution so SAP and Honeywell can run together, even if it’s not in a cloud native manner, knowing that in many cases, SAP is still being run on prem. This was very important because it otherwise would have eliminated a large percentage of the opportunities for various SAP companies that haven’t yet made that migration to cloud. That’s going to be the big challenge for SAP ahead. For Honeywell, it’s already really built its tools in Forge to be cloud native. That solution should be able to scale upon the huge real estate opportunity that’s out there. Good move by Honeywell. Smart stuff.