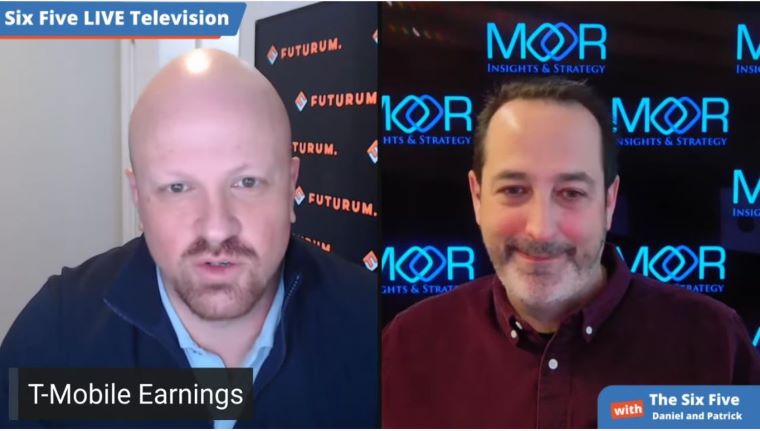 Daniel Newman: So let’s keep rocking and rolling, Pat, because there was a company … By the way, I think you and I both kind of put a tweet out. I stole your sort of Google tweet style look where I showed T-Mobile, they had a fairly big beat, if I’m not mistaken. The line was something vertical. And so it was basically, this is a company that had strong revenues, exceeding expectations. Not by a ton, but had a really big beat on its earnings. And then on top of that, the company had really great net adds in its 5G business, which is something that, I think that over the past few years, we had the John Legere era of T-Mobile, where it was kind of the cool, everybody switch, pink, attention-driving.

But you said something to me in the green room, and I’m going to steal a little bit of your thunder, because I think it was really worth pointing out, Pat. And that’s that for the last few years, 5G, as it’s been coming into market, there’s been a bunch of companies that have been playing in this space. AT&T, Verizon, and here in the US, and T-Mobile I’d say are the three biggest. T-Mobile, of course, did the deal with Sprint. But for the beginning period of time, we heard mostly about Verizon and AT&T. But over the last couple of years, while Verizon and AT&T have seemingly been focused on content and other diversification strategies, it appears that T-Mobile has been locked and loaded on 5G. They had a huge net add number this quarter, and I believe they’ve now reached 210 million customers on their nationwide 5G network.

Now, think about that math in your brain a little bit. There’s like, what, about 347 million people in the US, total? I don’t know if that number’s changed much, that’s a number I’m pulling from the back of my mind, but I think there’s about 350 million citizens in the US, and they have 210 million customers by the end of the fourth quarter on its nationwide 5G network. So on top of that, though, what I thought really drove T-Mobile’s numbers, here, Pat, was guidance. And maybe it’s worth reiterating that I’ve said this over the last few weeks, I’ve said this here, I’ve said this on other channels. I don’t think people were necessarily expecting this quarter not to have good tech earnings. And despite all the headwinds about tech, I think most people said, “Well, this was really the October to December timeline.”

And remember, mid-November the NASDAQ was at all-time highs, tech was booming, the economy was looking very good. This was actually, in November/October, this was before omicron, so it almost was starting to look like we were on the backside of COVID, before the next wave, and now what’s coming, pi or nu or I don’t know. But anyways, now that we’re … So we had about a month where it was in that period of time, two months where it wasn’t, but very little that was going to impact earnings on these giant tech companies who had all these deals already in funnel, Pat.

So what I did say was going to happen, though, was the market was going to be overtly paying attention … Or, sorry, acutely would be the right word here, paying attention to what do guidance numbers look like? If you look at Facebook and Meta’s numbers, they got destroyed because their guidance was bad, their capex was high, and their forward earnings started to look at risk. T-Mobile was the opposite. T-Mobile has extremely bullish net add numbers they’re looking at 2022, five to five and a half million is what they’re talking about. They’re predicting strong earnings for the year, strong revenues, and strong growth. And they’re focused on 5G, and they weren’t part of this FAA, 5G C-band issue, because they’re operating in a different spectrum.

Overall, I’ll just leave it here. Great numbers, good growth, huge network, customers are using it, by the way. Disclosure, am a user of T-Mobile, and if you’re an international traveler, by the way, I always loved it for that, because of the relationship with Deutsche and T-Systems, especially when you go over to Europe, I never have issues. So over the last few years improvement. One last ask, Pat, better T-Mobile service downtown Austin.

Patrick Moorhead: Yeah, that would be great. AT&T has it kind of locked downtown Austin here. But no, you brought up some great stuff, and if I could find the right tab here, I wanted to just show some of the amazing … And these net adds are off the chart, but let me strategically just talk about what T-Mobile has done. As AT&T was off spending $80 billion on Time Warner, $80 billion, and oh, by the way, they’re going to spin it off and merge it with Discovery for 40, so that’s like a $40 billion loss, and Verizon buying companies like AOL and Yahoo and trying to become a content play, little old Sprint and T-Mobile really stuck to their knitting and stuck to the core of what they do, and that’s providing great cellular service with expansion into business communications services. That’s exactly what we’re seeing here. T-Mobile got mid-band by buying Sprint, and yeah, I get they’re doing some spectrum acquisitions too. But net net, the company was their first, and quite frankly, if you look at what they paid for Sprint versus what T-Mobile and Verizon paid for C-band, it was an absolute steal.

And now you see T-Mobile stealing all of these consumer customers away from AT&T and Verizon. So I understand the desire to not be a purveyor of quote-unquote dumb pipes, but I don’t think T-Mobile is that. But if I look at AT&T’s disastrous, disastrous acquisition of Time Warner, which includes the much often-talked about this week, CNN, and then if you look at Verizon buying AOL and Yahoo, I’m expecting them to buy Napster next. Did I just say that or what, am I thinking that? No, I’m just kidding. No, I think this is just an exclamation point and sticking to the core, knowing what you’re good at, and sticking to that.

And this is part of the problem with being a public company is you do stupid stuff in the name of growth. And I think what we saw at AT&T is senior management got run out, and there’s a new crew in there right now, and their stock has done horribly. Anyways, having a good Friday.

Daniel Newman: It feels like there’s an analogy or a parallel to Succession here, although it’s not actually, because obviously Succession was about, more lean to more what was going on with Fox. But if you think about it, I just think about that show, and if you haven’t watched it, by the way, highly recommended. But I’m thinking about in the beginning when they acquired that first sort of forward-thinking media company that they later decided to just dissolve because it was all a big sham, it sounds to me like some of the buying decisions of some of the other media/mobile companies, and their decisions looked somewhat similar to that.

Again, there’s kind of always those two opposing forces, Pat. It’s growth at all costs and stay in your lane. And so sometimes staying in your lane is what you got to do to be successful, and at least at this particular point, T-Mobile has done that, and they’ve done it at the expense of the other giant carriers here in the US, and you got to give them credit where credit’s due, so good job T-Mobile.