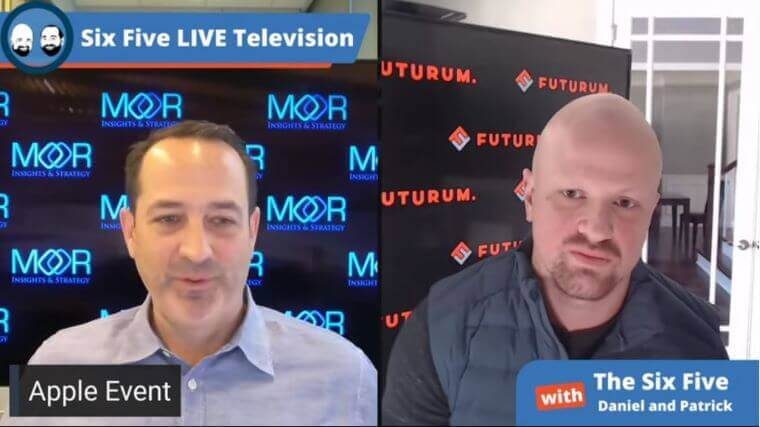 Daniel Newman: All right. Let’s get to our last topic, Pat, and try to keep this show on time. Apple. I mean, geez. I know sometimes we talk about them, sometimes we don’t. I know we’re not probably the biggest fanboys ever, but they had their big spring event, Pat. Why don’t you go ahead and kick us off with your thoughts?

Patrick Moorhead: Yeah, so they had seven announcements. Update the Apple Card, a purple iPhone 12, Apple Podcast Subscriptions, 4K Apple TV with a new remote, a redesigned iMac with the M1, and a new iPad Pro. And I think what I want to focus on is the new iPad Pro. I don’t give a lot of kudos to Apple, and I do hold them to a much higher bar than anybody else, because they are worth a couple trillion dollars, and they have a near monopoly in smartphones in the U.S., and they’ve done a good job vertically integrating. When I look at the processing power, the IO, the keyboard, the ability to work outside of it. And I want to bracket this for professionals who want to have a one-step workflow, using the camera, using the pen, as opposed to maybe taking a picture and then moving it to a workstation, maybe using a Wacom pen, right?

And then connecting that to your workstation. This does a really good job on a very narrow set of professional… It’s not going to be for all workstation people or all creatives, but I got to give credit where credit’s due. They put the M1 in there, as well. Most workstation applications are going to want more GPU, the eight performance cores isn’t going to be enough for some people either. But I got to give credit where credit’s due. The final thing, iMac goes M1, and this is going to sound really snotty, but the coolest thing I feel like Apple did on iMac was the MagSafe power that it did, that I think is pretty cool, but there’s a lot of places where they missed. The last iMac update was a decade long. They didn’t put a face ID. Then we’ve got fingerprint on the keyboard. It has a huge lip. Why? To make it thinner, I guess. I think consumers much rather have an edge to edge and maybe a little bit thinner. The iMac is thinner than an iPhone, Daniel. And I just don’t know who’s asking for that.

Daniel Newman: Well, we’re going to carry it around.

Patrick Moorhead: I guess. And then finally, two USB ports. So I’m happy about, but… Oh, and they’re on the back where, if you’ve got peripherals that are quick in and out, got to wrap around the back. Anyways, got to give kudos where they are. Oh, final kudo, new Apple TV remote. I will probably buy 10 of them for the 10 Apple TVs that I own. Gets rid of that horrible track pad, that pretty much everybody hates.

Daniel Newman: Yeah, absolutely. I’ll go quick because we got to tie this one off, and then we appreciate everybody tuning in. Had a chance to hop on Yahoo finance. For me, this is all about M1-isms, M1 everywhere, M1 is the future for Apple. No doubt. That’s the path they’re going. It’s going to be these ARM-based course. They talk about a lot of things as being their first and only and better. But I do need to remind everyone, Intel and AMD and others are doing a lot of the same things, a lot of the common and similar innovation, but the devices look good, Pat. And what I noticed from this event is what’s old is new. They’re moving more towards services and more towards all kinds of other things to diversify their business, the colors. I mean, heck that’s cool. I don’t know. My kids will dig an orange iMac. For me, I was the fine with the old silver and black.

I thought that looked pretty good. Still have a couple on my desk. So as much as I crap on Apple at times, I actually do buy their products. I feel like that gives me more of a right to do that. Anyhow, a lot there we’ll come back to it. We’ll watch that. Pat, by the way, that MagSafe charger. That’s cool. But what’s that thing going to be, like 300 bucks along with that keyboard for the iPad? I mean, look guys, make a touch, a laptop. Just do it. Just freaking do it already.

My God, make one. Charge us like four grand, and people will still buy it.