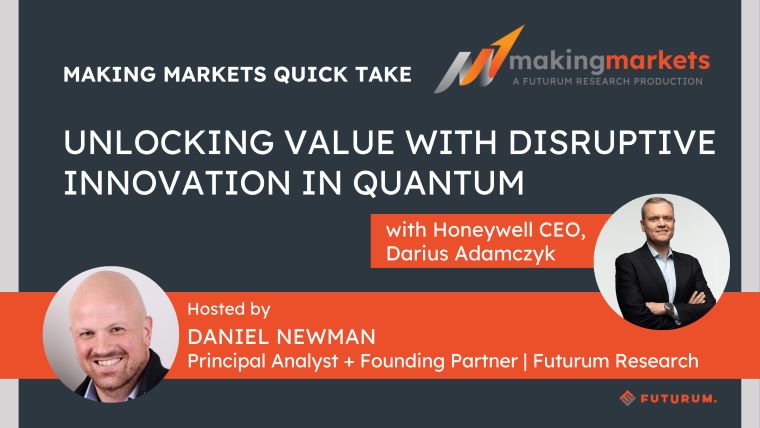 In this Making Markets quick take, host Daniel Newman and Honeywell CEO Darius Adamczyk talk about how the company is innovating in the area of quantum computing.

Daniel Newman: The first, is you mentioned quantum. And so, there’s been a lot of publications out there about the Quantinuum spinoff, which was Honeywell Quantum and CQC. And Honeywell’s going to be the number one backer. Seeing quite a bit of this in the market lately. I believe, it’s very intelligent engineering to unlock value in disruptive innovation. You saw, Dell did it with VMware when they couldn’t get the value inside of the Dell, they unlocked it. You just saw Intel did this with their autonomous driving unit with Mobileye.

And I felt that Honeywell followed a similar path, where you have a lot of value, but because Honeywell’s so big, so diverse and quantum was a small revenue component. It maybe wasn’t getting full credit for just how much you guys are actually, contributing and competing into that space. Anything else to that decision, to that move? Because, like I said, I’m very excited about it. It looks very good. Tony’s doing a great job. And seeing Honeywell hang onto that big share to me says, “You’re not bearish on it. You just wanted to make sure it got out in front where it might get lost a little bit in a company so large.”

Darius Adamczyk: No, I think that’s absolutely right. We love this combination. I mean, we think that the analogy here, is think about some of the leading hardware players in the personal computer market in the early ’80s. So, whether you want to talk about IBM, or Compaq, or one of those players, combining with a company like Microsoft, and then really merging into one. I mean, right now Honeywell has the leading hardware in the world, in terms of quantum computing. CQC has the leading software platform, in terms of quantum computing and not just for Honeywell, but really the whole quantum computing world. And we are keeping CQC at an arms-length from Honeywell, because it’s not just designed to work on Honeywell hardware, but really any other hardware. And that’s the way we going to keep it. There’s going to be a bit of a separation.

Darius Adamczyk: So, I don’t think that Honeywell has a lot of value attached to it, because we have Quantinuum within it. So, obviously we’re thinking about ways, as to how we liberate that value and potentially have it be a bit more exposed to investors.

Daniel Newman: Yeah. And I’ve put my thoughts out there. I could definitely see a public offering. I’m not going to ask you to comment on that, that wouldn’t be appropriate. But, for people who want to invest, there’s very few choices. And again, mostly it’s been locked up in a Honeywell, locked up in Google, locked up in IBM. And so, if you believe in quantum and you want to put some of your investment behind it, it hasn’t really been broadly available. And this, if it does go and becomes something in the public market, when that happens, investors will have a chance to say, “Look, it’s a company I believe in, partnered with a company…” And by the way, I do think it’s worth really pronouncing the fact that, the arms-length between hardware and software is going to be huge, because we don’t know in the end. What we do know, is that hardware and infrastructure continuously evolves, but just like semiconductors and software, the winners are the ones that have the software that can run on any chip.

And the easier it is to run it from system to system, the more opportunity and growth that exists there.