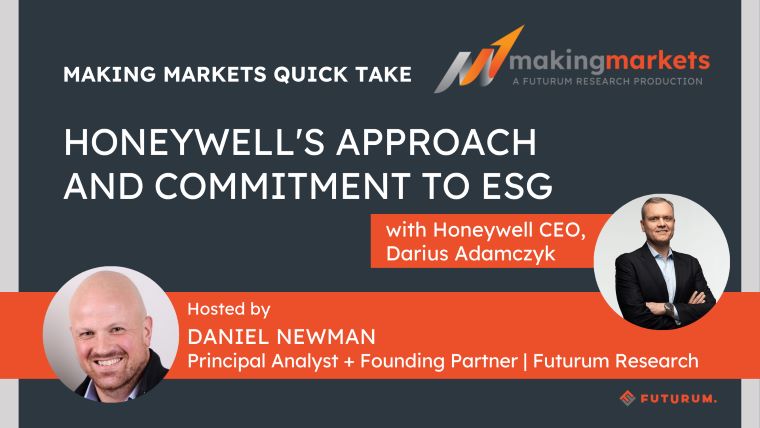 In this Making Markets quick take, host Daniel Newman and Honeywell CEO Darius Adamczyk discuss the company’s commitment and approach to standards for their operations in terms of environmental, social, and governance factors.

Daniel Newman: Let’s flip to the ESG thing and talk about that a little bit. That to me, is just a huge opportunity. I’ve seen some data come out that, Honeywell has made somewhere around 90% improvements in its own. And what I say is, it seems like Honeywell is, its own biggest client in many of its innovation efforts. And this is one great example of it. Firstly, maybe just broadly, what’s driving ESG as such a priority for Honeywell?

Darius Adamczyk: Because, ESG is embedded in so many things that do across the business and just to maybe tee-up something else. I mean, every year we issue our ESG sustainability report, that comes out every September. And I encourage all of our investors to at least flip through that, it’s about a 70, 80 page document, which comprehensively breaks down what we do and how we do it on all elements of ESG, the E the S and the G. And I think we have a track record, frankly, that’s second to none. And I think that you see that, more than 50% of our R&D spend is on ESG oriented solutions. And as percent of the total ESG, revenue’s going to continue to grow. And I’ll just point to a couple of specific examples. I mean, I talked about US Digital Designs. I mean, that is a very ESG oriented company.

I mean, saving people’s lives is a very big ESG theme. Probably, the one element that maybe doesn’t get talked about as much as I think it should. Now, this is maybe a little bit away from digitization and maybe, where we talked about. Probably, our fastest growing business at the moment, there used to be Intelligrated, which by the way, is still growing extraordinarily fast, but actually one that I think, going to bet on, is going to grow even faster, is our sustainability technology solutions business. Which, really contains all the technologies that are going to be relevant in the new energy infrastructure. So, whether it be green fuels, whether it be plastics recycling, whether it be carbon capture, or it be hydrogen fuel cell batteries, all of those technologies are contained in that business. And we’ve had some great wins with JGC to name one of our partnership with United Airline, being another. Our partnership with Sacyr, in Europe for plastics recycling, that business is going to exhibit exponential-like growth.

And I think, can be Honeywell and specifically, our UOP, can be transformational in terms of the role that they’re going to play in taking the energy segment from what it was, to what it will be in the future. And as you know, there’s a lot of commitments around zero carbon emissions in 2040, 2050. We can be that bridge, with our technology portfolio. It’s available today, so this is not futuristic. A lot of this is available today. We can help a lot of these companies really transform to who they will be in the future.

Daniel Newman: Yeah, there’s a massive energy transition that’s going on around the world, every industry and as a company that is so industry-focused, not just industrial, but industry, you have such a tremendous track record in areas, manufacturing and aerospace. We’ve talked about a lot of these. Every one of these industries is under a different subset of pressures. And so, I’m really glad you mentioned the say-do, is something I hear a lot, or that posturing that’s gone on, versus execution. Because, I feel like over last few years we’ve got a lot of posturing and I’ve tracked primarily tech. And so, as like with Honeywell, I’ve been watching your technology transformation, but almost every major company in technology has made some level of a commitment saying, by 20X, 30, 35 40, they’re going to achieve carbon neutral, or they’re going to be 90% sustainable goods, or they’re going to be using only recycled fuels, or they’re only going to be sustainable labor.
There’s just a lot of promises being made. And you and I had a little time to talk off the record, and I liked one of the things you said, along the lines of, 2030 versus 2050. I mean, you have things being committed, that will be two, three, four CEOs from now, for some of these companies, maybe more.

Daniel Newman: And so, it’s easy to say it, but the doing is complicated. And you mentioned you have these technologies that exist. You guys have probably one of the most comprehensive data sets of environmental sensor data in the world. You have macros on the utilizations of materials, that are required for companies. This is very real and tangible for the tech industry, which is going to be one of the most accountable, because they’re making the biggest promises, they want to be on the front end of this. Honeywell’s not really just going to be a partner. From what I understand, they’re really going to need a company with your capabilities, to be able to meet the promises they’re making their stakeholders.

Darius Adamczyk: Well, that’s exactly right. And I talked about some of the technologies that we have today, that can make that reality. And there are two sides to this. The first one, is how do you remediate? How do you become less hydro-carbon intensive? That’s a big body of work and a lot of investment and transition and transformation has to take place there. But, there’s another element, that’s just as important, which is measurement. You also have to be able to prove the fact that you are not as carbon intensive as you were in the past. And you have to have sensors and systems and software to be able to do that. And just to give you an example, I mean, we are currently in the process of instrumenting one of our own facilities that happens to be a manufacturing facility in this case, but to really measure the emissions in real time.

So, as we implement techniques, technologies to minimize those emissions, or eliminate those emissions, we can actually prove that. We can prove that and we can measure it in real time to say, “Okay, here’s what the carbon emissions were, and here’s what they are after the applications of a given technology.” We think that, that’s really important, because today it’s mostly, math models and applications and so on. And I think that’s helpful, but until we develop a system record to actually track carbon emissions, I don’t know that we’re going to have a fully compliant infrastructure in industry.

Daniel Newman: I feel like the word from everything you just said, is really accountability. There’s a big accountability opportunity that Honeywell can help these companies to deliver on. And that’s something I’ll definitely be watching closely, but the sustainability story is very, very compelling. Last question, there seems to be a bit of a debate in the markets right now about the large conglomerate, versus the systemic breaking of these companies. You saw with GE years ago, but now you’re seeing some of recent ones with Johnson & Johnson, with Bouche. Obviously, Honeywell, it seems much of your stuff is integrated, but you’re also perceived-

Daniel Newman: As a conglomerate. I’d just love to get your take on what you see the forces are here and why Honeywell is currently-

Daniel Newman: In its current condition.

Darius Adamczyk: Right. Yeah, maybe a couple of answers. So, the first one is, we don’t view ourselves as a conglomerate. I think when people think about Honeywell, they think it’s a conglomerate, but there is a technology theme that’s very, very common. I mean, industrial automation business, or aerospace business, which the heart of it, is avionics. Well, what’s avionics? It’s, they really control aircraft, through the avionics platform. Same thing as warehouse automation, or RSPS business, building technologies. We’re the pre-eminent player in building controls. I mean, that’s what we do. But, I can see why people would say that, it’s a natural view. Because, we don’t really have that as the central theme, we don’t control and automation of its central theme. We have the end markets as a central theme. We talk about buildings and so on. But, we could be named Honeywell Control And Automation, it would fit.

Daniel Newman: Yeah, I think it makes sense. I think the moral of your answer there, is that conglomerate would not be an appropriate word to utilize. And although, the market may sometimes misinterpret it, because of the diversity of your business, that everything has common threads that tie it together, create value at scale, which is the difference between a conglomerate and a diversified enterprise, that’s building things across many industries. Darius Adamczyk, thank you so much for joining me today on Making Markets.