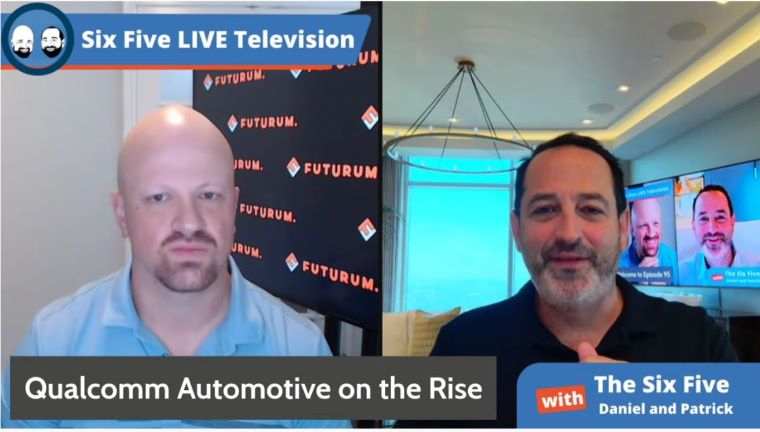 The Six Five team dives into the acquisition from Qualcomm of Veoneer and what this means for their automotive ambitions.

Patrick Moorhead: So let’s move to our next topic. And that is overall Qualcomm. So interesting. I don’t normally tune into General Motors investor days, but I was pretty excited to see what they talk about the future of autonomous cars. Their evaluation, Tesla is running laps around GM in terms of valuation, even though GM is the number five or four based on revenue or units on the planet and Tesla is way, way down there. Now, why is that the case?

Because investors see as the future as autonomy and the future as EV. And more important, I’ll call it the infinitely customizable car. And that’s something that people lose sight of. So they came out and introduced, GM introduced what’s called Ultra Cruise. And this is a higher positioned system than cruise, which think of cruise as L1 up to L2 plus, and think of Ultra Cruise as three and maybe four. It was hard to determine exactly how far it went into four, but these things are kind of amorphous. But the ability, I’ll quote GM on this, and this is part of the news that’s important, true hands-free driving across 95% of driving scenarios. And GM says Ultra Cruise will ultimately enable door-to-door hands free driving on all public roads in the US. Now they didn’t say no steering wheel and they didn’t say that the drivers weren’t going to be in there. So that leads manipulate a three and four.

But deep in their press release in their slide deck was this, we are using five, I’m going to use their quotes, nanometer technology, and the architecture is scalable. And I was like, okay, two companies that I think have that now, Nvidia, well, at least the scalable part, Nvidia and Qualcomm. Nvidia hasn’t talked so much about five nanometer, but there is a company, a chip company that you and I both know that has five nanometer and a scalable platform called Qualcomm Ride. And I did an analysis at CES 2020, that catalog that Qualcomm and GM were aligning for ADAS.

Daniel Newman: Yeah. I think you hit it on the head, Pat. This is not hard to back into. GM doesn’t want to get its investors lost in who its technology partners are. So, it instead focused on the process, the capabilities, the technology. But of course, if you’re a semiconductor company, only Intel has ever been able to somehow convince every one of its OEMs to slap its brand all over its products, which credit to Intel for that, we’ll talk more about them a little bit later, but in terms of companies like Qualcomm, I wrote a piece after IAA Mobility in Germany, kind of talking about semiconductor companies becoming the linchpin of the future of automotive.

This is a great example where looking at the underpinnings of companies as large as GM, and of course, you’re going to see the same thing with the Volkswagen Groups, huge automotive groups. Understanding whom, which tech companies they are acquiring their technology is going to give a pretty good insight into growth, and the role that semiconductor players are making. Now, I’m going to pivot the Qualcomm discussion here on that note, because Snapdragon Ride is, I’m almost certain, what’s going to drive the future of GM’s autonomous driving platform. And of course, Snapdragon Ride is an extensible platform that also connects the rest of the stack. When you think about things like infotainment, telematics, instrument cluster, it’s about the expansive tool set that can be built on compute, and that can be scaled out.

There are other architectures that are more closed for ADAS. Those are interesting as well and every OEM is going to approach this differently, but that’s the route Qualcomm is on. And speaking of Qualcomm, I just want to touch on the fact that you probably heard in automotive, they were in this battle to buy Veoneer. Originally Qualcomm had a deal to buy Ariva from Veoneer. And then what happened is a big tier one, Magna came in and made a tender for the whole company. And so all of a sudden, Qualcomm was going to lose out this prized asset arrive. Ariva is a L2 plus ADAS system that was acquired by Veoneer, and that was really what Qualcomm wanted. They’re looking for something that… they’re piecing together their ADAS through Snapdragon Ride. As it stands, they want to expedite that with some good technology that was held by this Veoneer organization.

But with the mag deal Qualcomm had to come back to the table, basically aggressively in the night on a Sunday, made a tender over a offer of Magna, got board support and essentially moving forward. But everyone knew what Qualcomm doesn’t want acquire the entire tier one, doesn’t wanna be a tier one. Qualcomm wanted that intellectual property innovation and some components of Veoneer, which was the Ariva platform. And so they came out this week, announced a deal, partnering with a company called SSW. And basically just to kind of be clear is now everyone knows the path. The path is going to be SSW is going to acquire the Veoneer in its entirety.

Qualcomm for a small some as compared to the whole deal is going to acquire Reviver. SSW, this organization, it’s not a private equity firm, but it’s going to act as a partner in essentially identifying the most important assets of the Veoneer organization and then finding homes for the rest of the company that are ideally more are strategic. In the end, Pat, my assessment is this is Qualcomm making a move to stay focused on what it was set out to do, which is expand that Ride platform, acquire this ADAS technology and not get stuck in the middle of parting out a large tier one, found a partner company to help header the deal. Of course it’s going to get its looks from a regulatory standpoint, but it seems like it was really well organized, put together and orchestrated under new CEO, Cristiano Amon’s leadership.

And as I see it, they’re going to get their man, Reviver and Qualcomm’s moving forward. And this automotive space for them is going to be really significant. You said 10 billion pipeline. You can tell the company’s really focused on it.

Patrick Moorhead: Great analysis and I’m glad you added on the Veoneer piece because it’s all part of the puzzle here. I put a lot of links from Daniel and I in the show notes to… that goes over all this. In fact, Daniel, I wrote an article that said, no, Qualcomm isn’t becoming an automotive tier one. Not the most creative headlines I put out there on Forbes, but I wanted to make that point.