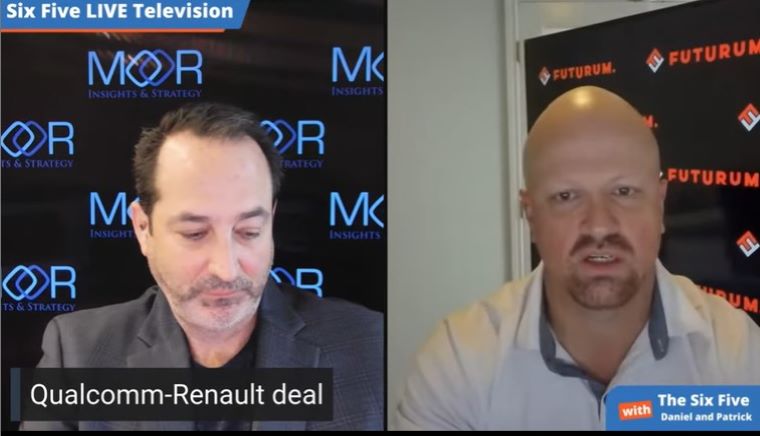 Daniel Newman: Qualcomm, we’ve talked a lot about the automotive, Pat, with Qualcomm and it just feels like every single, what is it like every three days there’s another announcement? I think the $11 billion design pipeline win or wins over the last quarter were amazing, but-

Daniel Newman:… incremental. The 11 billion incremental to add to its 19 billion but essentially what happened is, it’s just one more announcement this time. It was Renault Group, I don’t ever say French words well, but Renault? Renault? Renault basically they publicly came out and announced a deepening of an existing strategic partnership that was already announced last year around the World Congress a little bit before that they, Qualcomm, is planning to invest in their, what’s considered their dedicated electric and software company also called Ampere, just to keep things confusing for people paying attention to the semiconductor space that they’re going to co-develop high performance computing platforms on their Snapdragon digital chastity for Renault next generation of software defined vehicles. And they plan to start these vehicles being available in 2026 and that they have now a commercial agreement that’s got kind of ties all of these things together. Pat, look, there’s a number of large auto makers out there, there’s the BMW Group, there’s the VW Group, NIO Group, there’s Stellantis Group, there’s not a lot of consolidation here.

What we do know for sure is that there a number of different things. It’s not just about electrification, it’s about telematics, it’s about infotainment, it’s about drive and Adas and putting all these things together and Qualcomm has done a really good job of doing the building blocks here. They’ve gotten the partnership with all the companies. We saw this at the automotive day. The Renault deal is just one more check in the hay, another big company making big plans to build around Qualcomm and they’re kind of you, if you think about it like building moats and flanks. This is what they’re doing. They’re building moats and flanks, long term agreements on a business that’s relatively small for them today but it’s only going to become bigger as more Qualcomm ends up in every vehicle. So it’s a nice partnership, nice win, kind of an expansion of what exists, I don’t think, I got to say, a whole lot more, but it’s going to go from physical compute to digital twin and everything in between and really good trajectory for Qualcomm here.

Patrick Moorhead: Yeah, digital, Qualcomm digital chassis is real. I remember a few strong automotive electronics vendors who laughed at Qualcomm getting into more than telematics and they got into the dash and they’re the market share leader in advance dashboards. People laughed at them trying to get into Adas, they did multiple strategic deals with folks like Arriva and then BMW and then we have another strategic engagement here with Renault, not only on the hardware side, but I would even say more importantly with the software side as they’re going to work together to make that happen. And mobilize is great, but it’s a black box and it’s hard to work around. Nvidia is getting a little bit more open with its desire and I think some of this could be driven by some of the pressure that Qualcomm is providing, which is somewhat of an open stack where they’ll work with the old stack and essentially it’s a custom stack. So another big win for Qualcomm. Congratulations to Nicole, the $30 billion man.