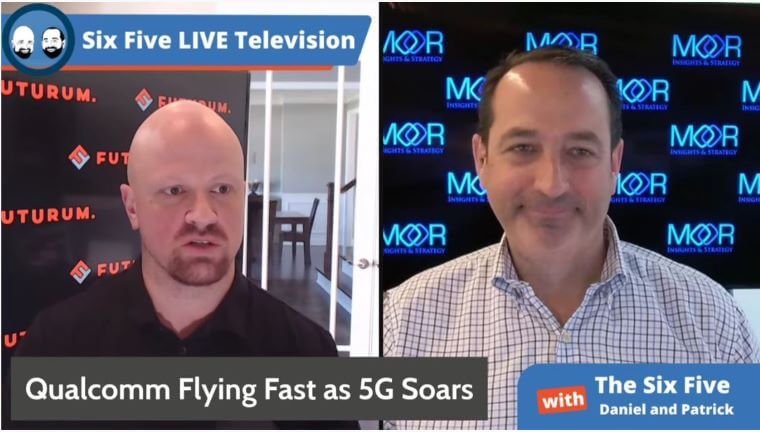 The Six Five team explores the recent happenings at Qualcomm.

Patrick Moorhead: Let’s move on to Qualcomm. Another chip stock that crushed it. They were up after hours, nearly 5.5% when they issued their second quarter earnings. It was the last earnings for CEO, Steve Mollenkopf who handed the torch to Cristiano Amon.

Daniel Newman: Absolutely. We had the opportunity to spend a little time with Steve ahead of that earnings call. It’s always been an honor to get insights, having Steve and Cristiano talking to us. The company is doing really, really well. It’s a tumultuous series of years. Speaking of Apple with its litigation, FTC regulation around the world, had its NXP deal killed by regulators and slow-moving decision-makers. The company has not had the easiest set of years. But what it has had and what I said for quarter after quarter was, the tailwind of 5G is going to be important to the longevity and the momentum. And Qualcomm’s there. I admire Steve and what he helped the company get through. But, I’m also excited to see new leadership. Cristiano is a passionate, inspirational personality that I think is going to be really technology focused, hopefully, getting away from some of that legal and regulatory.

It won’t go away. But, just being a little bit more out there, talking about the technical. In terms of the earnings themselves, a $1.90 Versus $1.67, the earnings. The revenue came in at almost just under 8 billion, about 400 million. It’s funny when it says 7.93 versus 7.62, and you go, “That’s not that big of a beat.” Yeah, you’re right. It was only $300 million. I love how with multi-trillion dollar stimuluses, Pat, now we know stimuli. We no longer look at hundreds of millions as a big number. It’s a really big beat. Here’s the thing, Oat, that I really want people who are listening to this podcast to be thinking about with Qualcomm is. 5G handsets is a core part of the business and the momentum behind that 5G businesses. Year over year, we saw 53% growth in handset business.

That is the 5G way. You are seeing it. You’re seeing it happening. They haven’t revised their total handset number up from the 450 to 550 million 5G handsets yet. But, that number, in that revision, maybe could be coming, Pat. I think you might’ve even asked a question about that. Buts here’s the other part of what I thought was very interesting about Qualcomm.

2 billion plus dollars, over one third of their revenue, is not tied to handsets, on technologies business. There are a front-end business against Skyworks and Qorvo. And Broadcom emerged the leader. Nearing a billion dollars a quarter. Up almost 40%. their automotive business hitting nearly a quarter billion dollars up 40%, as well. And then finally, 71% growth, Pat, in their IOT business, which is now a billion-dollar business for the company. We think of handsets, we think of 5G. We might even think about licensing and intellectual property when we think about Qualcomm. What we don’t think about are all these adjacencies that are now generating a third of the technology’s revenue and growing about as fast as the handset business, meaning that within a few quarters that could be easily a $3 billion business, giving a lot of runway and a lot of trajectory for growth at Qualcomm.

Patrick Moorhead: Wow. There’s about a molecule of oxygen left in there. It was a great. No, it’s great analysis. And I want to echo. It was a real honor to, you and I both talked to Steve and Cristiano about the earnings. I thought that those two made an incredible pairing. Even more excited to see what happens next with Cristiano at the helm. I really think Cristiano’s legacy needs to be, what did Qualcomm do outside of wireless. It’s hard for me to separate RF handset and digital modems. Those are part of smart phones. You need a analog and a digital portion to make magic happen. I’m really interested to see, when it comes to AI, when it comes to IOT and automotive, where the company can go. I think we’re going to see a rate of acceleration at Qualcomm in terms of what happens and how it happens.

And I’m super excited to see where it goes because the engineers who work at Qualcomm are brilliant. The company is best at solving the hardest problems. Wireless, particularly when, I remember the naysayers saying, oh, 5G. It’s easy to have a separate digital and a separate analog function without working it. And Qualcomm’s like, “I think this is going to be really difficult here.” And that’s part of the magic behind their incredible analog business today, which like you said, is the biggest handset RF front-end business in the industry. Bigger than Skyworks. Bigger than Qorvo. And bigger than Broadcom. Strap your helmets on folks. Cristiano is in town. New sheriff in town. Let’s see what happens.

Daniel Newman: Absolutely, Pat. 54% year over year and 116% earnings growth. I didn’t say that earlier. Just reminding everyone. Pretty darn impressive. But, Kramer’s mad. Stock price should be up more.

Patrick Moorhead: Yeah, it should be