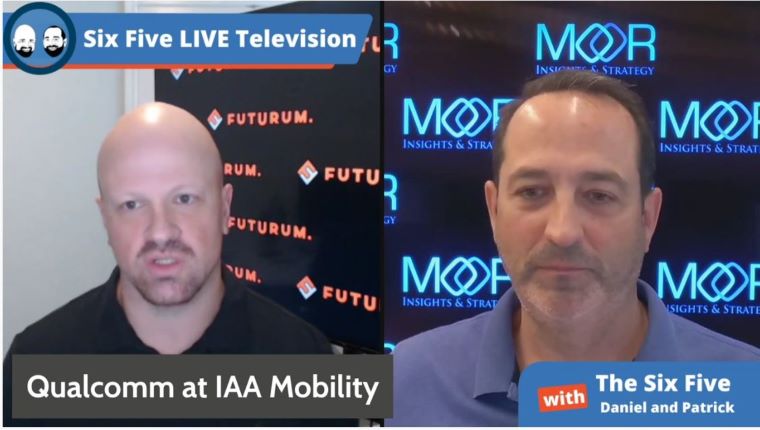 The Six Five team discusses the Qualcomm announcement coming out of the IAA Mobility 2021 event.

Patrick Moorhead: Let’s start off with Qualcomm. We had Cristiano Amon who did a keynote there and had a couple news events.

Daniel Newman: Yeah, it was a pretty big show. And just as a quick introduction, IA was pretty much a mega show, six halls at the Munich Messe, tens of thousands of people attending, major corporations. You had an entire show and I want to give a quick shout out to the German government that got the show off the ground. There was a lot of administrative and paperwork and forms that had to be filled out for traveling in and out. But as a whole, we were able to attend. It was very normal with the exception of the masks, having to show vaccine but it was a good indicator to me, Pat, that with good governance, good management, we might in fact be able to get back in person. And by the way, you and I will be at re:Invent with Amazon and Snapdragon Summit with Qualcomm so this winter barring any major variants, we’re starting to see signs of human to human interaction once again.

All right. I don’t want to take any more time on that, but I wanted to point that out because a lot of people I think are asking that question, “Hey, are we ever going to get back in person in the tech industry?” And by the way, so good to be face to face., So good to actually get to see things. I’m going to talk real quickly on the Qualcomm side. Great story from Cristiano, there was a big piece of news that dropped about a partnership between Qualcomm, Google and Renault. Renault not as familiar to most people here in the state side but very, very large automotive company, announced a significant partnership to basically use Qualcomm’s third generation Snapdragon automotive cockpit platform along with the Google Assist Google Maps to create this integrated experience for the buyers of the new Renault vehicles.

This is kind of just a example of what’s going on across the board. We’re hearing from the entire gambit of semiconductor companies, which are quickly becoming some of the most influential companies in the automotive space. That to me was the big theme of this IAA show. When we come back on the back end of this and we’re going to talk about another big announcement, is what we’re finding is that there are a few different systems in the automobile and the automobile as it gets electrified and as we move towards autonomy are basically being driven by computers. What is being considered, Qualcomm calls it a digital chassis. Some people call it the skateboard but what we are going to have in the future with these electric vehicles is you have motors and you have braking systems, you have a compute system and then you have these different onboard systems.

You have infotainment, you have telematics, you have the drive control navigation, you have ADAS and you have these different systems that are all connecting. You have vehicle to cloud or C-V2X is what we call it. And you’ve got all these different things, taking all this data in real time, it’s processing and essentially the vehicle of the future instead of having all the complexities of a combustion engine and these different small systems and dozens and dozens of different subsystems of the motor, we are going to be able to work with a couple of these different chip companies, put this together and basically create a very dynamic vehicle economy. If you knew about vehicles in the past, seven year design cycles or more, very complex to make changes.

Well, we’ve all learned from Tesla over the past decade that you can create a cloud updated vehicle that essentially the 2013 S model and the 2020 S model have the exact same software, the large tablet, download the newest software from the cloud. Same sets of features only very, very small iterations in between so then instead of having to come up with new models that are completely new, it’s constantly being updated. And that really was what I got from Cristiano’s themes of his keynote was one, the vehicles are going to be iterated upon but they’re going to be dynamic and agile just like the cloud. The vehicle itself becomes a rolling data center at the edge. All the data around it is going to become an imperative. 5G is going to connect everything so that things like autonomy, smart cities, the grid, the infrastructure, other vehicles, humans can all interact with this infrastructure, Pat.

And then in the end, we’ve got a future where mobile phones and vehicles have more in common than you ever thought, essentially getting us from one place to another. And then you add in full autonomy and that could be the Arriver offer from Qualcomm that is L2 working towards L4 or something like Luminar, something like what NVIDIA offers. There’s so many options but overall big set of updates, Pat. I’m going to hog this one a little bit but you’re going to get a couple of extra long segments later on. But exciting news. I know you watched it from afar. You were covering it closely. Any other things that you saw because I’m sure I covered a lot but God, there was so much.

Patrick Moorhead: Daniel, I want to actually take a step back. And the thing that really dawned on me is that, we’ve seen various forms of agreement and disagreement on the future of the car. And I would say that initially on, let’s say seven or eight years ago, the traditional automakers really gave it lip service. And it really took kind of the fast movers like Tesla to really show how it’s done. And then people started getting into the how do I implement this? A lot of the traditional auto makers said, “Hey, I can do this myself,” or, “I can do this just working with a tier one and I don’t even have to talk to the chip makers.” But we’ll here we are. I feel like the entire industry has an agreement that so first of all, the car is a software defined data center on wheels.

The second thing is, is that while you do need smarts to create an EV, don’t confuse showing up with an EV as having a smart car. You can have a very dumb EV car, but making it software defined is a whole other type of thing. Companies like Tesla, they’ll change a bumper design with 10,000 cars in. A traditional manufacturer would never even think of doing that. They would think of, oh my God, what about supply chain? What about spares? How do we do this? Well you know what? Tesla figured it out. I think we’re at the point though, where all the automakers get it and what do they get? They know that they need a direct relationship with the chip maker. And if they didn’t learn that by now, by not being able to get chips, they’re never going to learn and they’re probably going to be out of business but also for collaboration.

And don’t confuse anything that people like Qualcomm are trying to become a tier one they’re not or this direct relationship that they have with the end customer, the end automaker, it’s that when you’re a tier one, there’s a limited amount of people you can actually help when you go direct to a company like Qualcomm or Intel or NVIDIA, there’s a lot more that they can do for you. And they can share a lot of that value. I wrote an article on Forbes, 1,500 words. You can check that out. I did a YouTube interview with the business lead, Nakul Duggal, who actually runs the automotive business. You can check that out as well. And I’ll put that in the show notes, but let’s move to the next topic.