Plus is Going Public via SPAC Merger with Hennessy Capital Investment Corp. 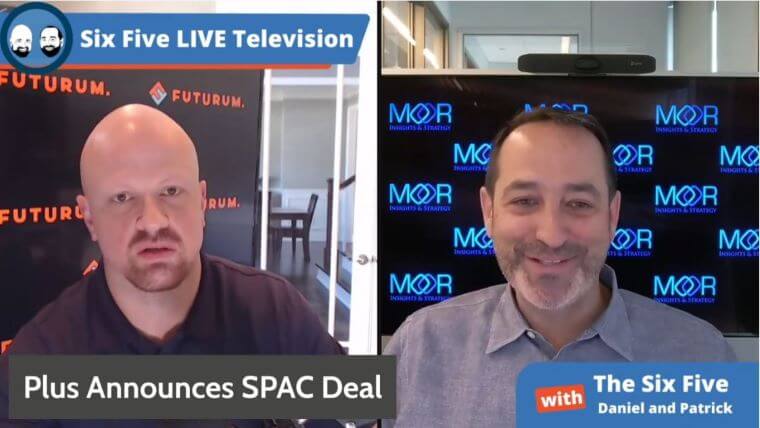 The Six Five team explores the SPAC Merger between Plus and Hennessy Capital Investment Corp. and what that means for both companies.

Patrick Moorhead: Plus announces a huge SPAC deal to go public. And it’s super exciting here. I’m not going to hit the financial piece. I just want to talk about the company and kind of why they’re differentiated, and yeah, they happen to be going direct listing via SPAC. Oh, and they did a pipe as well. Just if we want to get another terminology in here.

So Plus is the world leading autonomous technology company for trucks. You may not have heard of them before. In fact, their prior name was Plus AI and they are extremely differentiated.

So first off, I believe that their technology is differentiated. When you look at the software and the hardware in the data, they’ve got a full stack level four software and they can do full autonomous. Their hardware is ready for mass production and they have orders for thousands of trucks already and their data, they are so far ahead of the competition in real miles, driven by an order of magnitude. They’ve got global partnerships with the largest trucking company in China called FAW, Iveco in Europe and some of the largest fleet operators in the US, which I know their name, but I can’t say it because it’s NDA. Darn it. But you would be impressed. And I think they’ve got a roadmap for commercialization with maybe some of these other companies like TuSimple, kind of, hanging out and not really having a plan here.

The company plans to mass produce of driver in autonomous trucking in 2021 with FAW and full autonomy by the end of 2024. And it’s not that they couldn’t do full autonomy. It’s also the combination of those countries that actually have to let you take the driver out. And I would say, from a revenue point of view, going from revenue in the seven figures this year to over a billion dollars in a couple of years, and this is what the company is talking about, is first off, they have more than 7,000 orders and pre-orders in the US and China. And they’ve already started delivering the initial batch of a thousand trucks to a pilot customer that I can’t give the name this quarter. And if they just ship those, you’re looking at $600 million in revenue.

FAW produces over 300,000 trucks a year. And you can imagine if even retrofitting 25% of those trucks would generate $6 billion a year. So to me, when I line up the competition again, TuSimple is the biggest one, it’s not even close. And I do have an analysis coming up. I want it to be good, Daniel, but it’s still kind of in draft mode.

Daniel Newman: Well, there you go. A son of a trucker here. I grew up in the business. And frankly, I don’t often get to talk about this particular business, but this is that perfect overlap where AI and autonomous vehicles meets practicality in the marketplace. We’ve got stuff that has to get from place to place. As my father always told me, people will always need trucking.

We also have a couple of market complexities that are going on that are going to accelerate this. Before we touch on that, basically the SPAC deal itself is going to be between Plus and Hennessy Capital Investment Corp. If you haven’t heard of Hennessy, it was the company that brought Canoo public, GOEV. So this seems to be an area of focus, the autonomous vehicle for Hennessy. It is an interesting place where we’re meeting that level four with supervision.

So they’re not planning at this moment in time on putting trucks on the road without drivers. Now, a lot of people are like, “I don’t want trucks on the road without drivers.” But here’s what’s really going on that’s important. One, trucking companies spend inordinate amount of money and operating expense on fuel. We’re all hearing what’s going on with fuel. Well, the difference is when you run out of gas, as long as there’s no colonial pipeline shut down, Pat, you go to the gas station, you fill your tank, you use the gas. If the gas is two bucks today, three bucks next week, it’s got a little bit of elasticity. It might hurt your wallet at home, but it’s not the end of the world.

Well, in a trucking company, it’s like an airline. They use tons. If it’s a big trucking company, thousands, maybe tens or hundreds of thousands of gallons of fuel a year. Well, they hedge fuel. These companies hedge fuel. They buy it. They lock in pricing. And when drivers drive, maybe you’ve heard of the uncle led foot, or you’ve got that kid that you’ve taught to drive that maybe smashes the brakes a little too much. Well, all those different behaviors tend to be a big drain on the economy of the gas.

Well, truck drivers have some of those same issues. They don’t accelerate smoothly, they don’t break smoothly, and that all uses gas. Well, this level four assisted system will allow a driver to sit in the seat in the truck to accelerate, brake, that perfect, and saving 10 to 20% on fuel. That is a massive amount of money in itself, within a couple of years, will allow companies to retrofit trucks here domestically, or to justify the investment in new trucks in China, because in China, there is no retrofitting.

So that was one of the big takeaways for me, is just the whole fuel hedging opportunity. A lot of trucking companies are going to say, or you look at opportunities like FedExs and UPSs and Amazons that are all making bigger commitments to doing this. This gives a big opportunity for Plus to consider and be a partner to those companies. Will they be? We’ll see. Don’t know yet.

The last thing I will say, Pat, is not all SPACs are created equal. And I pointed this out in my piece. Check it out in the show notes. SPACs kind of have a little bit of a rough reputation right now. And I’m someone that’s invested in several SPACs. Some of them are really good companies, but because there were some really not great companies that were taking public via SPAC to create quick money for some people, the whole sector has gotten a bad name, but it’s actually a really great vehicle to take interesting companies public that can’t go through that whole long, arduous process of an IPO road show and don’t necessarily have that kind of brand identity, whether it’s a Airbnb or a… there was a million IPOs, name it, Ubers. I’m just saying those big consumer names that everybody gets excited about. Well, the SPAC is another great way for them to go public. And I do think in the long run, the good ones will eat out success.

So I can talk more about this, but we got to keep moving. Good luck to Plus. We’re excited to track it and follow it. And as the son of a trucker, I love seeing the innovation in this industry.

Patrick Moorhead: I love the son of a trucker piece. That’s beautiful.

Daniel Newman: We’re geeky tech analyst guys. But you know, I grew up in a house where dad drove a 12 or an 18 speed.

Patrick Moorhead: I love that about you.

Daniel Newman: He didn’t own the company, but that’s a side deal.

Patrick Moorhead: A love it. Let’s move to the next topic.