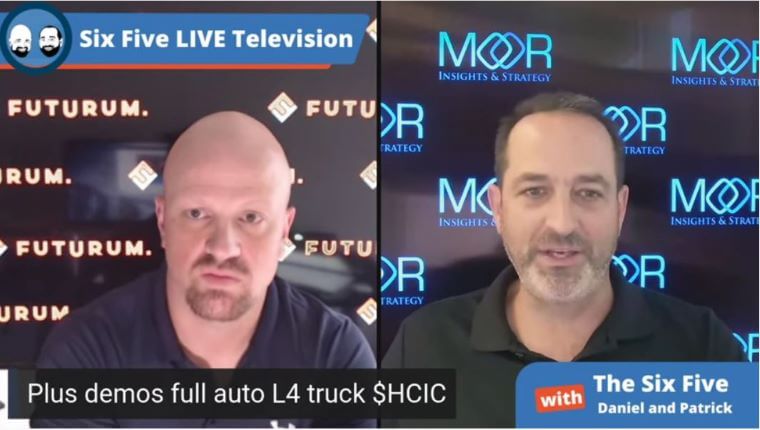 Daniel Newman: Plus, it used to be Plus AV or Plus AVI, sorry, Plus Autonomous Vehicles, Plus AI, now just Plus. And by the way, NASDAQ traded under HCIC, Hennessy Capital Investment Corp. They’re a SPAC. I know that was a thing and now it wasn’t, but this is and this is still in the process of doing the reverse merger, going public. Very interesting company focused in on the driverless semi-truck space. Had some news this week. By the way, user of NVIDIA DRIVE, part of their stack.

So the company basically came out with a Level 4 driverless truck demonstration. The news itself was basically, “Hey, we’re doing this. We’re going to show you we’re doing it. We’re doing it safely.” They’re able to come out and start to talk with suppliers, their fleet, being able to show that this is something that is ready for prime time. And, you know, Pat, I think what really caught my attention about this news, which by the way, I believe this was in China, right? This took place-

Daniel Newman: This took place in China where, unlike in America where they’re doing a lot more retrofitting of existing trucks, I believe the technology has to be built into new. That’s the only way it’s going to be allowed in the Chinese market. I’m not saying that for a hard fact so we’ll have to validate that, but I believe they’re not doing the retro. But Level 4 is a big deal. We’ve heard about Ubers, we’ve heard about the issues. We’ve heard about Tesla, people that have decided to not drive and the amount of risks that are being created.

Plus is really moving quickly in a big industry that provides a really large opportunity here, and they’re doing it with some success and they’ve been able to actually go on video, publish something. This isn’t Nikola rolling a truck down a hill. This is on a real road with a real demonstration of a successful semi on a traffic-driven road. No special conditions, successfully doing its thing, Pat. Like I said, not a ton of news here. Really interesting showing just how far this is coming and, by the way, new entrants like Plus that are paving the way, that are in this space, like I said, with partners like NVIDIA.

Patrick Moorhead: Can you look at L1 to L5. Right? There’s two different ways that companies are approaching this: Some companies are going the L1, and then building up; and others are going straight up to L4, L5, and then trying to build back. And I think this is particularly important to Plus, because a lot of Plus’s detractors are saying, “Oh, you guys are successful on ADAS. That’s because you can’t do L4.” Well here we are. We have Plus showing a driverless, no tele operator, and no human intervention, on a highway in China, and I do think this is a huge milestone for the company.

So I talked to the folks there and they still stand behind an advantage that they have, in that it’s going to be hard to get to a safe truck, autonomous truck, without eight billion miles of road experience. And this is an area that, you know? It’s an advantage that Plus has on their competitors, but I do honestly believe that this is important. And this is a reason, just one reason, Daniel, you and I had covered this before, Amazon has the option to buy 25% of the company through a warrant structure, and committed to buy 1,000 units of Plus Drive that isn’t the L4, but it’s an L2-plus, or L2-advanced type of scenario. I feel good that they’re leveraging. From a hardware and platform perspective, they’re leveraging NVIDIA. That gives me a good feeling because I feel like NVIDIA’s in this for the absolute long haul, and are all in on this. But just rounding out, they haven’t done the SPAC merger yet with Hennessy, but it is coming and they’re very soon to making this happen.
Congrats to the folks at Plus. It’s pretty awesome.

Daniel Newman: Yeah. It’s a positive for Plus, Pat. Good partnerships; technology, we mentioned a couple of times in video; good strategic partnerships. Amazon’s a great partner to have on your side. Clearly a thousand trucks is just the beginning of what Amazon could do so, yeah, let’s give some props where props are due.