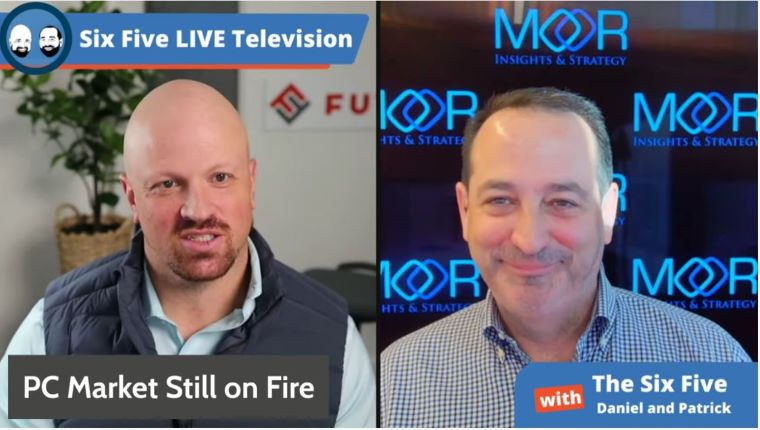 The Six Five team dives into PCs and the huge year they had in 2021.

Patrick Moorhead: But hey, let’s go to our last topic here, and this is PC market still on fire. 2021 was good. 2022 looks positive, as well.

Daniel Newman: The media loves tragedy, Pat. You have a tweet that basically looked back to 2011. Bloomberg. Was it MIT? Sorry. MIT Technology Review. The personal computer is dead. I don’t know, Pat. I feel like a broken record. I can’t tell you how many times on this show I have basically said the death of the PC has been greatly overstated.

Patrick Moorhead: I bring this out every year and I’m going to annoy you for putting this up here, but I have to. It’d be nice if I shared the slide first.

Daniel Newman: Yeah. Would you do that? So, look. The market right now and in general, tragedy porn and negative headlines are just heavily embraced by our world. I don’t know why we’re so cynical as a society, but we are. This is absolutely wrong. It’s as wrong as the idea right now that a half a point of interest rate increase is going to stop Microsoft from growing in the next several quarters. It’s almost idiotic. But of course, it does manipulate things in the right direction, so sentiment’s important. Anyways, I won’t do a market diatribe right now, but here’s what’s happening, Pat. Last year we heard endless things. Semiconductor shortage, semiconductor shortage, chip shortage. We increased our ability to produce chips by 20% despite all the shutdowns, COVID, the ships at the ports. 20% more chips were produced last year than the year before, so we were able to increase production.

But what we haven’t been able to fully appreciate is just how much demand is actually out there for devices. So, we saw in ’21, Pat, and this is Canalys data. In the 4th quarter, 341 million shipments of PCs. That’s up from 290 in 2020 and 249 in 2019. Pat, you’ve got a massive uptick. We’ve seen almost 100 million increased shipment units in the course of two years. You’re seeing strength in this space. You’re seeing Lenovo rise to be the number one vendor in the 4th quarter. And Apple falling to four, by the way. But you got Lenovo, HP, you got Dell, Apple, and Acer, and I don’t know, man. It’s almost like beating a dead horse, but I don’t know how many times we have to tell the market that the demand for PCs hasn’t slowed.

Patrick Moorhead: Yeah. No, no. Here’s what I understand. 10 years ago, PCs were boring. They were thick and chunky and got three hours of battery life. And the iPad looked like the most amazing thing on the planet. It had an app store. It was thin. It got 10 hours of battery life actually using the thing. Even more on video. And iPads were increasing and PCs were declining, so I think people said, “Hey, the PC is dead,” like MIT Technology Review said. What they didn’t quite think about is what the reaction of the PC industry was, and that was to essentially take the positive attributes of an iPad, which is 10 hours of battery life, touchscreen with an app store, and make it thin, and then everybody jumped on it.

It was very easy for me to see what happened. In fact, even Apple went on an apology tour. Tim Cook went on his apology tour four years ago and essentially apologized for what a terrible job that they had done with their Macs, and they were doubling down on the investment. And I think we’re seeing the fruits of that investment today with the new M1 processor, the new designs for those, and I think we’re going to see some pretty cool stuff in the future out there. And then COVID hit, right? And we realized, hey, I can’t do all this stuff on an iPad. I need either a notebook PC or I need a Chromebook. And here we are.

And the question is next how long will that growth go? So, I think that we will have a good year in 2022. First of all, people couldn’t get the notebooks, couldn’t get the PCs they needed in 2021, so you saw that demand pushed. I also believe as we go back to work people will reassess the technology that they actually need at work. Consumer is more of a wild card, right? Because consumer market will follow GNP and I’m not expecting any stimulus checks anymore for people who still actually have a job and were able to double dip. So, I think that’s going to weigh on consumers, so it’s going to be this big in commercial but offset by some declines in consumer.

Daniel Newman: Yeah. And just a quick frisbee, Pat. I think what you’re going to see is as work continues to not return to office, the demand for that higher end PC for work, but of course those work crossover consumer pieces are more and more common. More and more employees are going to need them. And then, of course, education. You’re going to see the lower priced, lightweight, Chromebook-style stuff still sell in volume because if students are learning, they’re learning on those kinds of devices. That’s all it comes down to. I got a house full of them, I can tell you that.