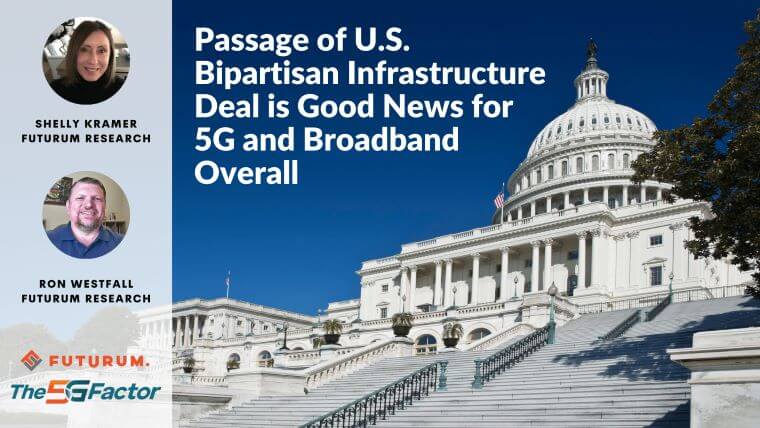 For this vignette of a recent episode of the Futurum Tech Webcast, part of the 5G Factor series, analysts Shelly Kramer and Ron Westfall examine recent passage of the $1.2 trillion Bipartisan Infrastructure Deal that includes $65 billion targeted at expanding access to reliable high-speed Internet and further bridging the digital divide through investment in broadband infrastructure including 5G connectivity. Their conversation stressed:

Ron and Shelly concur that the Deal improves broadband in the U.S. especially since the funding is not focused on one segment, but across multiple segments that combined together, can assure net new advancement for broadband and 5G across the nation.

If you’re watching the 5G space, be sure and subscribe to our YouTube channel to catch the show, or find the podcast in your favorite streaming channel and subscribe. You won’t be disappointed!

Shelly Kramer: And I’m going to start off by talking about the infrastructure bill. The bipartisan infrastructure bill passed in the last week, and that’s good news for expanding broadband and 5G connectivity across the nation, which is sorely needed.

Congress passed the bipartisan bill and a significant amount of that funding is focused on technology, specifically on expanding high speed internet access across the country. Democratizing this high speed internet, making it both available and afford, is critically important. We’ve been trying to breach this digital divide for a very long time now. I think one of the things that navigating a global pandemic showed us for sure is the importance of internet accessibility and affordability for all.

It’s great to see this as a key underpinning of the infrastructure bill. Some specifics there. $24.45 billion have been set aside for the Broadband Equity, Access and Deployment Program. This, again, will deploy broadband in underserved areas. Each state in the United States is expected to receive $100 million of that funding. There’s $2 billion going to the broadband connectivity fund, $2.75 billion allocated for Digital Equity grant funding. If you’re looking for opportunities to submit grant requests, there you go.

Ron Westfall: No doubt. This has been most welcomed. It’s been building up for a while. Finally, Congress was able to pass a bill that was signed into law. That definitely is laying the foundation for some very important work that needs to be done in terms of just that, making the US broadband infrastructure more available. Definitely it’s targeted at addressing underserved areas. That is certainly going to be a difference maker in terms of reducing the digital divide, but also boosting investment in key technology areas such as fiber builds, as well as 5G technology.

We’re seeing private networks taking off in airport environments. For example, companies like Betacom are making a huge difference in that regard. In fact, offering what is labeled a 5G as a service in terms of enabling private networking capabilities in airports specifically. And finally, $50 billion to improve our cyber defenses, as well as protecting against natural disasters. That definitely helps critical infrastructure to public safety.

All these billions are actually going to basically form that foundation to really advance broadband here in the US. I think it’s been most anticipated. Again, we’re looking forward to seeing how this plays out. I think we can make a solid bet that this will definitely be good news in terms of overall broadband capabilities, because it’s not just focusing on one segment, but really across multiple segments that all, when you combine them together, will make a net new advancement for broadband.

Shelly Kramer: Right. Absolutely. Well, good things ahead. We are very excited about that for sure