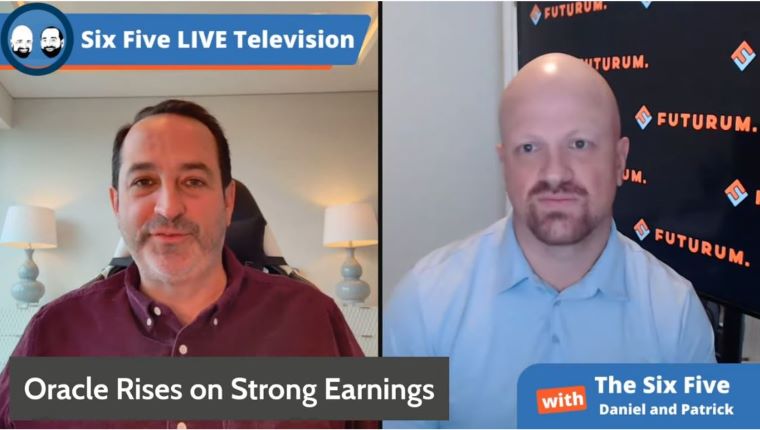 The Six Five team dives into the latest earnings coming out of Oracle.

Patrick Moorhead: And we are going to kick off with Oracle earnings.

So where do we start? Up 16% in the past couple days. What on earth happened at Oracle? The way that I would summarize this, Daniel, is it’s the first time the street actually believed that Oracle is a cloud company. Buybacks help. Okay? Don’t get me wrong. But total cloud revenue.

And it’s interesting. Everybody defines a little bit differently, even different analyst firms do. I mean, Gartner considers it IS plus PAS. AWS, really, they say it’s about IAS. Google and Azure, really it’s about IS, PAS, and SaaS. So Oracle’s definition is IS plus SaaS.

So think of infrastructure and a service and either NetSuite or Oracle Fusion apps. That was up 22%, $2.7 billion. Fusion ERP and NetSuite ERP, kind of a copy and paste from previous four or five quarters at that 20, 30, something percent growth. I saw a couple flexes in the press release. I mean, we’re all used to Larry getting on the call and flexing on customer wins, particularly about SAP. That’s been a common theme.

But let me read you this. Amazon Aurora customers are discovering that moving to MySQL with HeatWave, which we’ve written many white papers on, you can check out on our website, and Daniels, can increase their performance by 10 times the corresponding reduction in cost.

Now, here’s the kicker. Essentially doing the opposite here, typically it’s Amazon picking on Oracle, but here’s Oracle picking on Amazon with a 10X. So I feel like this is kind of the beginning of maybe the confidence era for Oracle, where they’re not having to make excuses or explain away. They feel like they’re in a pretty good position. Daniel, am I just completely overthinking this?

Daniel Newman: No, I think you broke it down pretty well. First of all, Pat, you and I know both from personal and tracking the tech space, it’s been a sort of turbulent period over the last 30 or 45 days for tech. Value has done a little bit better than growth. And of course the indices have been pretty well propped up by the biggest names.

Now, Oracle year-to-date is over a 40% return to investors. Now, that feels like growth. And it certainly is a type of return that people that are in the growth are looking for. But actually the company has all the characteristics of value. They pay a dividend. They actually have been increasing their buybacks.

But concurrently, at the same time, they’ve hit new record highs for their share price and they’re firing on all the right cylinders. And Pat, I think you said the exact right thing. The market is finally recognizing them as a cloud company. Now, this is a company that has over 70% of its revenue on a recurring basis.

So all the cloud SaaS consumption stuff where we’re like recurring revenue, this company’s been to doing this forever and they’ve been doing it really well. But Oracle, they’re a little bit of a company that people love to hate. And so call spade a spade.

I saw an article on CMBC that came out that actually the headline was something along the lines of based upon a one-time payment that had to be made to Mark Hurd from when he left HP, quarter terms to a loss. That was the headline. Now, at the same time though, this was in the after-hours market, the stock was up over 10% and breaking a hundred dollars for the first time in whatever.

There’s a little bit of this negative media. There’s some negative sentiment that seems to kind of hover, but the company is in transition. Now, they’ve recently seen a challenger position really neck and neck with Google Cloud rising up to compete for that third cloud. When you mentioned $2.7 billion, that’s not for the year, that’s for the quarter.

So you’re talking about a $10 billion cloud business. And when you start to kind of put all these factors together, you’ve got the potential number three spot, and you’ve got a company that is firing on all cylinders and addressing multiple markets, by the way.

Because with NetSuite, they’re actually addressing that SMB. They shared a stat, Pat, and between Fusion and NetSuite, the company has somewhere around 36,000 subscription customers. So they just have a lot of things going for them. So like I said, Oracle is one of those older tech companies that tends to carry some conservatism about its upside and prospects.

Larry certainly is an exciting, somewhat provocative and sometimes controversial chairman and chief technology officer. But you know what? Execution’s execution, and this company has seen a tremendous rise in results this year and the cloud business really modernizes it. And the company should be happy. Its investors and shareholders should certainly be happy. And Safra Catz, Larry, and the executive team should feel good about the results so far this year.

Daniel Newman: 74% recurring revenue. Most of their customers are tied up in long long-term contracts and their growth rate is 6%.

Daniel Newman: I haven’t seen him in the ballot box, Pat, but I do know the guy owns like a couple islands. So I’m thinking he likes to… I know what you’re saying. I’m just being funny. I’m guessing though he probably would like to see the tax rates stay low. He did move the company to Austin, Texas.

Patrick Moorhead: I know. That still froze me. When I look at press releases from them from Austin, Texas, I can see their offices from my house now.

Patrick Moorhead: Aww. That’s so nice. And I can see where you live downtown too. Hey bestie, what’s up?