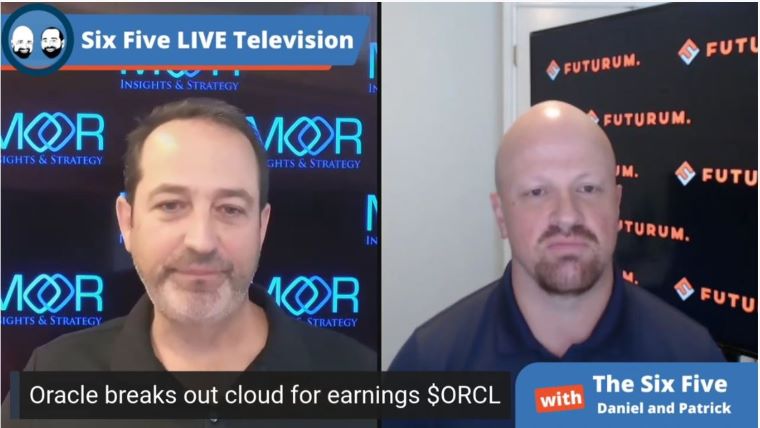 Daniel Newman: Speaking of companies moving forward, I came out with a bold MarketWatch piece.

We’ll put it in the show notes, but that investors shouldn’t overlook Oracle right now. And that the company is in the midst of a bold comeback. Now, the company had its earnings this week. And it’s hard when a company grows 4% and misses its revenue target albeit by a few bucks, and beats earnings slightly to be like, oh, they’re making a bold comeback.

But I believe that despite the fact that the growth was only 4% on the whole top line, that some of the information that was revealed by Safra Catz and Larry Ellison in this quarter’s earnings, tells another story. Now Pat, what have you and I complained about the most over the last two or three years when we’ve talked about Oracle?

Patrick Moorhead: Yeah, it’s about cloud. I think we complained about it in different ways. You wanted IaaS, PaaS and SaaS broken out, but guess what? Nobody in the industry is doing that, right? But boy, it would make our lives… Even Amazon’s not doing it, even though I know Amazon takes pot shots at other people. It’s like, no, no, no, Amazon, you have IaaS, PaaS and SaaS and you don’t break it out, so.

Daniel Newman: No. So great point, but I think what we both complained about besides the fact that maybe I was asking for an unreasonable amount of individual reporting here is that we weren’t getting any reporting. We were getting growth numbers against nothing. We were like, oh, you’re growing NetFusion 38%.

Well, was it $1 and now you’re doing $1.38? Or was it a hundred million and now you’re doing 138 million? We didn’t know. And so this quarter, the company finally came out, bulleted headline in it that it had reached $2.5 billion In cloud sales. So that’s SaaS, PaaS, IaaS. That’s cloud at customer, the hybrid cloud solution where basically Oracle drops its cloud off in your data center.

But that’s out of about what? Eight billion. Sorry, about $10 billion run rate out of about $8 billion in total revenue, or eight, nine billion in revenue this entire quarter, Pat. That’s a big piece of the company’s business right now, very significant.

And I guess the real reason I’m saying they’re making bold comeback is three years ago, I jumped on MarketWatch and I wrote an article that essentially said, Oracle is a cloud pretender. And I think you would have agreed with me Pat, in the-

Patrick Moorhead: At that point they were

Daniel Newman: In the first generation, the genuine cloud it just wasn’t even close to offering a competitive solution to what Azure, AWS, IBM or Google, any of them had. But when someone gets it right, Pat, our responsibility as analysts is to turn around and say, you know what? Prove me wrong. I’m glad you did. So, Clay Magouyrk and the team at Oracle with their Gen 2 cloud, the autonomous database technologies.

And then of course the rapid growth of their SaaS products, NetSuite, and Fusion ERP, both growing by the way faster than core Salesforce products, just as a percentage basis. Not as big, but as a percentage in between Salesforce and Dynamics cloud products. Pretty impressive growth rate Pat, but a $10 billion run rate puts Oracle firmly in the spot right after Azure.

Now I know that’s going to hurt some people’s feelings over in Mountain View, but Gardener, and we don’t cite Gardener on this show Pat, because we run our own analyst firm, but Gardner does do the quadrants. They do do some benchmarking stuff we don’t do, but apparently in at least one report that analysis’s planning to put out, they actually have Oracle usurping Google as the number three cloud player.

So when I say a bold comeback, look, the whole future Oracle is the bet. Can the company make the transition to cloud? They have 400,000 customers. They have 74% of their revenue, I believe last time I checked is recurrent. Stable company, pays a nice dividend. Stock is up almost 40% on the year. It’s doing all the right things, but 4% growth is boring.

But when you’re growing high double and triple figures in cloud and your entire claim is that you will become a cloud company and you start to execute and you’re proving it in your results and you’re finally coming out with numbers, you’ve got to give kudos.

Oracle, it may be a company that nobody gets too excited about when you say the name, but maybe it’s time to get excited because they’re doing some really good things.

Patrick Moorhead: Daniel, you covered pretty much everything. So what I’m going to do is, I don’t know if it’s a victory lap or not, but I was pretty harsh on Oracle and cloud. I wrote a pretty nasty article about Larry and some of the stuff that he had said and some of the claims that he had made. And that was during Gen 1.

And I just thought the company was flailing in IaaS, which they were. Gen 2 comes along, bare metal. They hired a bunch of engineers from Amazon, including Clay. And by the way, that always doesn’t get you the results you want. IBM had hired a bunch of Amazon people and it didn’t end up the same here. But the fact is that Oracle Gen 2 cloud is competitive.

And if you look at AWS is our bank which is about 30 points, and let’s say on a good day that they’re getting a 30% discount, right? You’re still looking at that’s 20 points that is being given to AWS that Salesforce and SAP could be taking had they made the investments in CapEx and had that capability.

So if nothing else, Oracle is really looking good on enterprise SaaS capabilities driven by a competitive cloud that is underneath it.

Daniel Newman: Yeah, that’s good analysis. And I’ve got to give you some credit and I think sometimes not a victory lap or we deserve this, but sometimes when it really does feel like there’s no oxygen left and we’ve taken it, you always find something to say. So hopefully everybody out there appreciates that.

Like I said, we do kick it back and forth and our instinct is to cover everything, but that was a good add there, Pat.