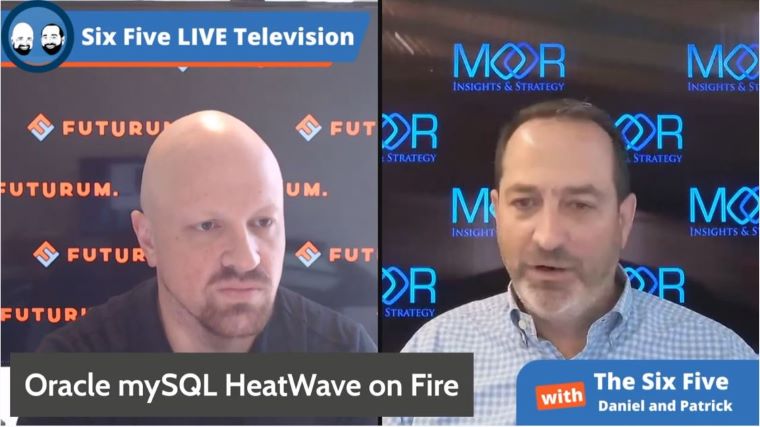 The Six Five team does a deep dive into Oracle’s announcement of the availability of MySQL Autopilot.

Patrick Moorhead: Oracle introduced the MySQL version of HeatWave and they did send shockwaves because they basically named and shamed every data based company out there. My favorite is what they talked about with Snowflake, which is they’re just fun to pick on because their growth rate and the way that they deal with the industry. Essentially, it’s an in-memory database as approach and it’s accelerated by AMD Epyc hardware, and essentially it does two things. It does transactional and it does analytics at the same time and it’s in memory. That’s what gives it… Oracle’s claiming seven times faster than Snowflake at one-fifth the cost.

I love the name because it is absolutely bringing the heat here and I know everybody is paying attention. You know, when sometimes things are too good to be true? They are, but here just based on how they’re approaching it and you don’t have to ETL data between OLTP and analytics and it’s in-memory and it’s accelerated, that’s why these numbers are so astronomical. There is a cost to moving data between OLTP and ETLing it out to an analytics program.

Oracle, one step ahead on MySQL. By the way, don’t forget, Oracle owns MySQL. That’s something that people forget. Everybody’s like, “They can’t be. They can’t be the largest customer.” Well, they bought the company MySQL, so they know MySQL really, really well.

Daniel Newman: Yeah. Just quick touch because we’re coming up on time, Pat, but Ron Westfall, Research Director on my team, wrote a great headline. He came up with, I want to give him credit. He said, “Oracle MySQL HeatWave Melts Snowflake With Unparalleled Price and performance.” Read that piece. I’ll put it in the show notes. You know, he named a couple of really big advantages. Because this was built for cloud, built with Oracle in mind and with the fact that the company owned MySQL, the ML and automation that’s built in, the autopilot architecture for MySQL to scale out data management, and the fact, like I said, that it was cloud-first design.

Let me just reiterate the things that you said, Pat. 6.8 times faster performance. 5.2X cost advantage, meaning you’re basically talking about the example they used. On an equal cost, you’d spend about 80,536 a year. On HeatWave, what would cost you $420,480 to run on Snowflake. It’s a no-brainer. Snowflake has to be trembling in its boots, but there’s no snow on the ground, so maybe it needs to wear sandals.