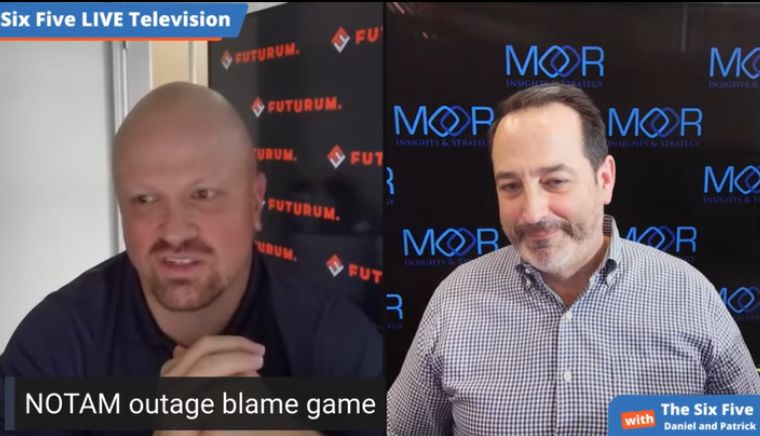 For those of you that have been under a rock and this is the first time you’re listening to the Six Five, the Six Five is six handpicked topics by Patrick and myself. Five minutes each, sometimes 10, but the whole idea is that we’re going to do deep analysis, minimum news. We know you can get the news elsewhere. We get ours on Twitter, but you can get yours wherever you feel like you want, but when you want analysis, you come here.

Now, reminder, we do talk about publicly traded companies, but this show is for information and entertainment purposes only. So don’t take anything we say as investment advice. Pat, I’m going to steal a line from something that you say sometimes and go, I’m going to call my own number, something Tom Brady did very ineffectively last night when the Dallas Cowboys sent him home hopefully for the last time. I mean, sure, he’s the goat, whatever. I am done with that guy. Into the sunset, my friend. You had a good career. Go Cowboys.

Patrick Moorhead: Tom Brady represents all washed up old men like me.

Daniel Newman: Pat, we’re over 40, remember? We’re invisible now forever. So let’s talk about NOTAM. Like I said, we’re not talking about no total available market. We are talking about the noticed air emission system in the FAA. Over the last few weeks, we’ve seen some different interesting systems failures that have brought some attention to legacy or older technologies. While we are not necessarily covering FAA, we were all affected. In fact, I was traveling out to California that morning. You and I were exchanging some texts and you said to me, “Hey, you might want to check your flight and make sure you’re actually leaving today.” This is the system that basically gives clearance and all kinds of other instructions to every plane that’s taking off. This failure costs more than 1300 cancellations and 9,000 delays. Unlike the one at Southwest, this was not unique to any one in particular airline. This was a systematic issue for the entire federal aviation administration that affected every airline, every plane, and it could have been an even bigger disaster.

As technology analysts, the first thing you and I do is we go, “Well, what technology is the software running on?” So if I’m not mistaken, Pat, you know and I, we are modernizing technology guys. We like talking about cloud, multi-cloud, hybrid cloud, the future of architecture, but we are also these rare advocates that the mainframe is far from dead and, in fact, there are still many applications in many highly critical industries and use cases where the mainframe is still the best way to make sure that you have a resilience scalable system, and everybody’s immediate assumption, probably because of what happened with other large outages and failures of older and more antiquated technologies, was that for some reason, this was also a mainframe failure.

Guess what, everybody? Pat, I’ll let you dig into this a little bit more. It wasn’t. So the mainstream media basically came out and blamed this on the mainframe. For companies like IBM and Broadcom and others that have significant businesses in the mainframe, that’s a bit of a shot across the bowel because the whole idea of the mainframe, as I said, is all about secure, resilient, scalable. When you’re running a global transaction system or payment rails, never goes out. So when a system like this goes out and everybody says, “Oh, it’s a mainframe,” that’s a big problem.

So while some people were really upset about this whole deal because their flights got delayed, other people turned to technology and started making claims like, “Well, if they were modernized or running in the public cloud,” which by the way does go out sometimes, “this would never happen.” Well, guess what? That wasn’t what happened. We wanted you first hear to know. Pat, what color do you want to add to this?

Patrick Moorhead: Well, first of all, the press blew this one, did not follow up on this. In fact, they let a guy whose name is Tim Campbell, a former SVP of air operations at American Airlines and now a consultant in Minneapolis, he was quoted in no less than nine of these articles where he was quoted saying, “So much of their systems are old mainframe systems that are generally are liable, but they’re out of date.”

So first off, factual issue, NOTAM does not run mainframes. It runs old Sun SPARC systems that are running a Solaris operating system. I had Sun SPARC systems in my data center when I was at Alta Vista in 2001, and let me tell you, those are not mainframe systems, those are gigantic servers. Some might even call them a web server. So factually, it’s inaccurate, and even with the Southwest outages, the mainframe was being blamed there. So first of all, there’s a factual issue going on there.

The second thing is that it’s important not to confuse older systems as bad and newer systems as good. I would like to say that newer technology does not go down, but then I would be lying. I would be inaccurate. In fact, even the cloud goes down as we’ve seen, and a lot of those outages have to do with our network misconfigurations, right? We’ve seen Azure. We have seen AWS go down. Heck, on the security side, we’ve seen customers leave open S3 buckets and have created these gigantic security issues. Larry Ellison at Oracle always talks about these systems that are autonomous.

So the fact is is that there’s new technology that can go down and there’s old technology that goes down. The key part here though is, Daniel, and you and I have riffed on this a lot, it’s about building resiliency, right? It’s a platform and it’s a holistic approach to it. It’s integration of the new stuff with the stuff that’s the old stuff. It’s skill gap and skill assessments. So I’m going to be talking and writing about this a little bit more because it really peaked my interest, and being a guy with gray hair, I feel like I could bring a little bit more perspective to that. That’s all I got.

Daniel Newman: Yeah, that’s a good one though. It’s always interesting because these things get so many headlines, and in the race to report, there’s so much inaccuracy. This is where, I think, we always have a good opportunity as technologists and as analysts to provide a little bit of color.