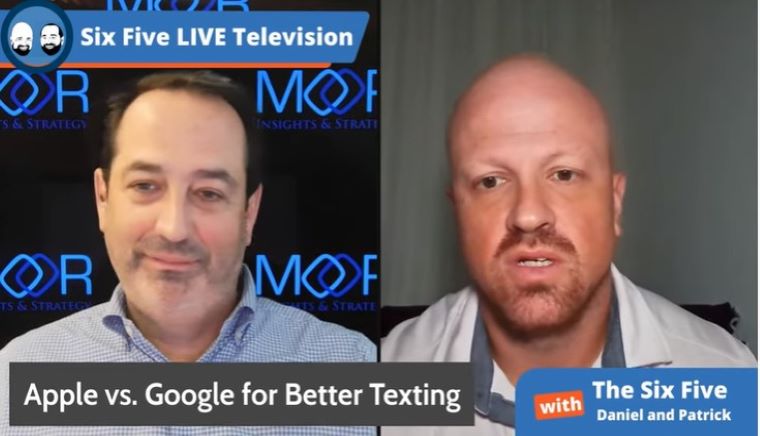 Patrick Moorhead: Apple versus Google and this whole RCS controversy. Daniel, you’re on a roll, buddy.

Daniel Newman: Look, we don’t even need to really go down too much down the technical rabbit hole. Let’s just talk about this through the lens of the discussion, right? So there’s been some discussions coming out, does basically Apple need to open up to allow for RCS, which is a protocol, but basically to allow the texting to be ubiquitous. Okay. So Pat, why do you carry your iPhone device? Really, why do you have it?

Patrick Moorhead: I’ve said a hundred times, it is my iMessage. It is only for iMessage because my family will only use iMessage and not like… Yeah.

Daniel Newman: This is the point. And so texting has become a fragmented experience. You text people on iMessage and you get a lot of features and capabilities and benefits when you’re on iMessage. And when you have an iOS device and you want to text somebody that’s on that really nice Fold device, the experience is different. And the bottom line is, Android is saying effectively let’s be less anti-consumer and let’s make texting, given its pervasiveness in our lives, let’s make it more ubiquitous across devices so that we don’t have an experience that’s significantly better when you’re texting from Apple to Apple versus Apple to other devices.

So here’s the real thing, Google is basically pointing out that, one, we need to take out the fragmentation. And two, they’re pointing out that Apple is depending on an older standard. And by the way, to upgrade that older standard from SMS and MMS to RCS, I think would basically unlock the key to making that ubiquitous messaging. And I’m not 100%. I need to do a little bit more fact checking on that. There’s something to be said that basically they wouldn’t be able to hold the green… What do they call it? The green machine. They wouldn’t be able to make everybody a green machine because now that RCS key would basically create continuity between the devices, Pat.

So long and short is, this to me is another story of Apple, basically building proprietary technology that closes off ecosystems. That has been their story for as long as they’ve existed. The problem is now is texting has become a worldwide, ubiquitous method of communication that people depend upon and that people are running on multiple operating systems. And largely, what Apple’s doing is shutting people out that don’t buy iOS from having a better experience in their texting, forcing people to carry an iPhone or iOS device in order to message just like you.

And the one thing that by the way, made me think of, Pat, before we kind of send this over to you and let you wrap this home, but is, I wonder how many of those people that you called Apple users that are buying those Samsung Fold devices are buying them as a second device versus people that are buying a Samsung device to replace their Apple device. I just wonder if they’re well off people like you that have enough resources that can afford to have two devices, two phone plans, all because they want to have better messaging experiences.

So you know what, this isn’t all because Google’s a happy company that just cares about us. There’s a reason Google wants this. It’s good for Android. But, going back to what we just said about Apple, Pat, they’re Apple holes, man, they are Apple holes and they will keep things as fragmented and difficult as possible in order to make Apple’s experience better, which is conflictive in every marketing bone in my body because I get why they do it.

Patrick Moorhead: Yeah. This is 100% a monopolistic power struggle, and let’s face it, Google has a monopoly in certain parts of the Android and advertising market. Apple has a monopoly in North America smartphones. And, being a monopoly isn’t illegal, it’s using monopolistic power to stifle a competition and impact pricing in the future. And what Apple’s doing here is, they are putting up a wall because they don’t want people defecting from iOS to Android. And there are a ton of people, particularly in North America, that only use iOS devices because of iMessage. And I am one of those people whose forced to use Apple technology.

Now, RCS, just to fill in some of the blanks here, with RCS, you would have higher resolution photos, higher resolution videos, you’d be able to text over wifi. And there’s a couple other features like read receipts and stuff like that. So you would not be as excommunicated from the family Grext, if you had iPhones and Android devices. So this is up here with Apple knows that it would lose iPhone sales and it’s not going to do this and it would rather stick with 1990s technologies, I think that’s when SMS tech standard was created, to provide a better experience for everybody.

I think the Department of Justice needs to look into this with Apple, the ad strategy, everything they’re doing in the app store. Actually, those investigations are actually ongoing right now, but it’s clear to me who the monopolist engaging in anti-competitive and anti-consumer behavior and that’s Apple. So I’m going to leave it there. Hey, I do like the Apple Watch. I do.

Daniel Newman: You know what Pat, like I said, I think I set this up fairly, if everyone wasn’t always so rosy and they were just more realistic… it’s like Google gets their hammerings from a lot of people about their competitive behaviors. People crap all over Meta and Facebook. People challenge Amazon’s… Amazon can’t do anything without being… they’re being called a monopoly in healthcare. They haven’t even finished the acquisition of One Medical yet.

I think with Apple, it just comes down to the fact that we’ve almost taken it like a personal responsibility to just say, hey, they should get some criticism too, because the good stuff, you can easily find all the positive stuff out there, but again, they also tend to create the most passionate community. And as we know, that passionate community makes it very hard for regulators to do their jobs because nobody wants to have a worse experience, which is why most of these platform acts are in such trouble to begin with because the consumer knows no harm.

And you can say they’re creating competition in a marketplace, but when the consumer is happy, then are you really going to make Facebook a worse experience? Are you going to make Apple a worse experience? So you’re going to punish the consumer because a company makes something that people love. So that’s the thing we’ve got to figure out. We need new antitrust laws and probably less focused on store branding from Amazon. But anyways.

Patrick Moorhead: But also, less focused on what somebody could do in the future versus putting your focus into what they’re doing now. Right now.