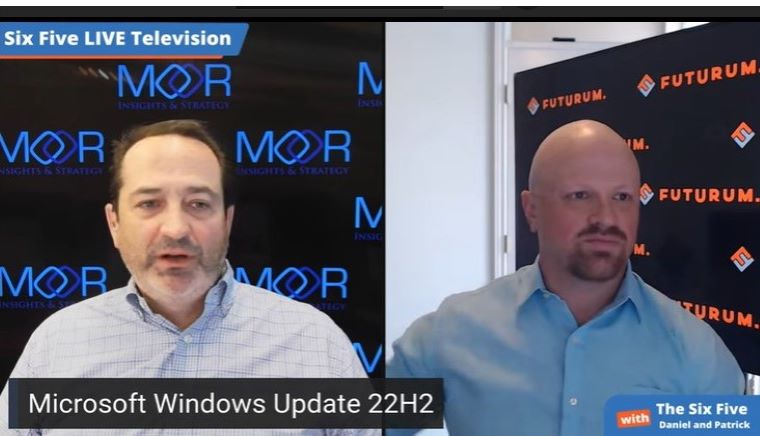 Daniel Newman: All right, let’s keep moving Pat. Let’s talk about Microsoft Windows had an update. This is probably a quicker hit for you.

Patrick Moorhead: Yeah, so Microsoft is back to doing some of its big cadences and while this in yesteryear, Windows eight and before would probably be called a service pack. And that’s a really big difference. So this was a sneak peek at some of the new features that are coming out on this platform. So this wasn’t in gory details, but it’s all about Microsoft desire to do four things. Make the PC easier to use and safer for everybody. Making people more productive. Making windows the best play to connect, create and play. I think arguably you can say that, from a content creation and playing, they’re doing really well. Maybe not so great on the connect unless of course connecting is doing a video call over Windows. And then finally, more security and management and flexibility for the workplace in hybrid. So there were a couple highlights for me that I thought were pretty good on the security side, Smart app control and driver protection really as a way to make sure you don’t get phished.

You click on this link that came from your friend to check out this new application. Smart act Control says nope, you don’t want to down download that. And essentially doesn’t let you do that if you are in IT. From an accessibility point of view, system wide live captions. Essentially what that means is, somebody who might be hard of hearing, essentially every piece of every word that’s spoken through the pc, regardless of what application it is, you get live captions. The other one in that same vein is natural voice narration. I don’t know if you know this Daniel, but Microsoft is actually the first company to do hardcore research on speech to text and text to speech. I know Google and Apple get credit for it, but Microsoft has the most patents and has put the most hours in. Essentially you have natural voice narration, if you’ve ever used it on Windows where it’s talking back. On productivity, you’ve got to improve Snap.

That’s a fancy way of saying multi monitors. Daniel, I’m surrounded by four monitors right now, and the only way I keep it sane is by using Snap, which is essentially to put the windows in the right place and have it remember where it is. Apple totally ripped off this feature from Microsoft, by the way. And I’ll leave it here. Studio effects. What this is, is Microsoft has worked with Qualcomm, Intel and AMD to tap into machine learning to make Teams calls, as one example, to be able to uniformly have a chip basket, sorry, a chip bag, and drown out everything but the voices, the ability to make it look like I’m actually looking at the camera when I’m not. And man, I need that, and I’ll bet you could use that as you look left to your notes. I knew I’d wake you up. No, no, this-

Daniel Newman: That’s the problem, Pat, with the large monitors though, is it’s harder to pretend to be paying attention. The smaller screen you can drift a little bit. I’ve got a 30 plus inch curved screen in front of me and I got another mon… I’m using two monitors, but yeah, we’re doing 10 topics. There’s no way we’re going to have this all memorized. Don’t be fooled for a minute. We’re not that smart, but the-

Patrick Moorhead: Oh, I just put the tab right in front of the camera.

Daniel Newman: I try to do that. I also have a pod partner that likes to yell at me for making clicking noises. And so anyways, he’s super strict about what I’m allowed to do during the show. Don’t worry everybody. Off camera, the abuse is worse. So you hit on most things. So actually I’ll close off the loop. I think A, Windows continues to get better. You mention them off the features that they’ve been stealing from Apple. Don’t be fooled anybody. Apple doesn’t really invent much. They tend to innovate on other people’s ideas and do it better than most. So that’s where they really tend to win. It’s like they didn’t come up with the first touch panel phone either. They did it a lot better. Do you remember those old smartphones with the touch screens on them? And then it was a million times better on Apple.

I like the focus stuff, Pat. So that do not disturb. Listen, I am the most attention deficit person on the planet, I think. Maybe, I don’t know. Some people would argue with me… But wait, what am I talking about again? But no, in all serious, I tend to be really struggle when I’m doing something important, not like this podcast, but say I’m writing something and I’m so easily distracted by notifications. Anything that pops up, any little thing that hits me in Teams or WebEx, it’s like, boom. The ability to understand and learn how to silence and how to get notifications. I thought that was a good little feature, Pat, to give people focus. Because I do think a big problem with us now, is that we have so much signal that even people who are pretty good at focusing struggle to stay focused. Again, I like the security stuff too, but you already hit on that. So sometimes there’s more oxygen, sometimes there’s less oxygen.