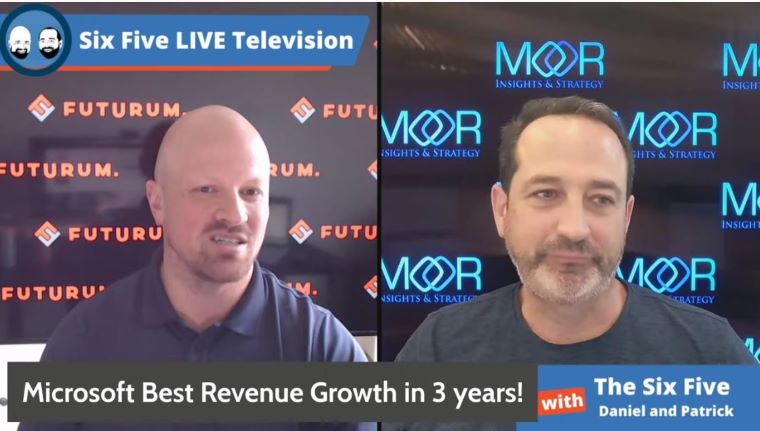 The Six Five team dives into the growth shown from Microsoft in Q4.

Patrick Moorhead: Gosh, let’s just dive right in into Microsoft. And maybe, Daniel, why don’t you kick this off? You’re on a roll.

Daniel Newman: Yeah, we split and we jab and punch. Sometimes I jump and Pat slides under. We’ve got a way, but there is a method to this madness for everyone out there that’s like, “Why is pat talking now? Why is Daniel.” We plan this stuff believe it or not.

Patrick Moorhead: Why is Pat ever talking? Sometimes that comes up.

Daniel Newman: Does it?

Daniel Newman: All right, look, Microsoft best growth in three years. Last quarter, by the way, was also its best growth in three years. So just when you think you can’t grow anymore, it grew some more. Outperforming on earnings, outperform in revenue. 46.15. I know compared to Amazon’s 113 that was barely anything, but in all serious, what a great quarter, what a great run the company is on. What are we all looking at? Look, Azure is always the number.

Now it’s a little bit mysterious because Microsoft doesn’t actually tell you how much IaaS it’s doing, but the market yet always gets … You see the CNBC number that comes out right away. What do they look at? Overall growth and Azure growth.

The intelligent cloud business for Microsoft is almost 17 1/2 billion dollars and you’re going, “Oh-oh, are they getting so big that you’re going to start to see this shrink?” So what it does mean though is that from an IaaS standpoint Microsoft is still gaining ground on AWS. That’s just technicality of 51 verses 37. But what it also means is that the cloud business has a lot of momentum.

I like to look beyond that. See, Microsoft is really taking this full stack approach. So what really caught my attention this quarter? A, the Dynamics 365 and Teams business. This integration that’s going on. Teams is at the epicenter of our business world. They announced a 250 million monthly user number this quarter.

And you’re starting to see that instead of the center of our universe and as workers being our inbox in our productivity apps, you’re seeing it become Teams.

And with this type of saturation in the market, it’s hard to think that this isn’t going to continue to grow and scale as they connect platform, automation, API, ERP, CRM, all into chat, plus productivity and Word and Excel and low code. All this stuff is coming. And the center of our universe if Microsoft gets its way is going to be Teams. So that’s a big point to pay attention to.

The growth of its software, by the way, Dynamics 365, almost 50%, Pat. 30 plus percent for the whole Dynamics business, 50% for the cloud business. I know you like to talk about that and compare how that sets up to a few of the other companies that you’ve got some strong opinions on. So I’ll actually let you lean further into that one.

Last one. And this is one that I know you’re going to want to talk about, too. So I’ll just start it off. The one alarm bell that went off for me this quarter was, why in the world was Surface down 20%? Yes, chips are short, but look at Intel’s numbers, look at AMD’s numbers, look at Qualcomm’s numbers. And then look at the recent quarter performances from Dell. Look at the reason quarter performances from HP. Look at Apple’s growth of Mac.

I get you have some growth and constraints due to some shortages, but nobody has been down that far. And with the number of shipments, higher end ASP’s, the fact that the Surface has a mix of devices at the mid and the high range on ARM, on AMD, and on Intel, I didn’t understand why that number fell so hard.

In gaming I think it’s just seasonal. I think that’ll pop back in the next couple of quarters, but the productivity cloud and windows business all very strong, very impressive. And by the way, LinkedIn, Microsoft social media company too, and LinkedIn advertising crushed it as well.

Patrick Moorhead: Wow. I think you left me with nothing.

Daniel Newman: I did give you some. I told you I didn’t even lean into how good Dynamics was. I figured you might want to ping that one a bit.

Patrick Moorhead: Listen, this story of earnings, I feel like I’m almost saying the exact same things, which is all the 365 suites, whether it’s Office or Dynamics, are just off the rails. Dynamics had a 49% growth. Commercial Office 365 was up 25%. And that is exactly where you want the growth, right?

That is SaaS and that is where Microsoft I don’t want to say needs most of its growth, but it’s a more profitable area. And the fact that they’re hosting all that on their own Azure cloud is a built-in advantage that it has over Salesforce. I could say SAP in there in the same breath, but they’re also partners there.

Microsoft did have its supply chain act together for Xboxes though. Xbox hardware was up 172% at the same time that Surface was off 20%. And I am sure they are gnashing of teeth going on at the Surface level because their product line is extremely competitive.

I think the challenge in fighting for supply chain and trying to overcome the lead, it might be a multi-trillion dollar company, but to try to come in and fight for the same components that Dell, HP, Lenovo, and Apple are fighting for is going to be really hard. Ironically, I think the thing that might’ve saved Xbox hardware was that it uses so many custom components, right? Nobody is fighting the Xbox group to get the custom AMD processor module with memory that’s sitting right on top. It’s a different type of part.

My final commentary, I feel like the strategic projects are starting to kick in post COVID, right? So we hit COVID and then people got into survival mode of their businesses and they might have pushed something. But what they did do is they put more strategic, dare I say, digital transformation projects on hold that didn’t relate to staying in business. And I feel like, based on my channel checks and talking with all the IT groups that I talked to, that those are kicking back in.

So finally, I got to hit this. Search ads up 53%, just like … And we’re going to … We talked a little bit about Amazon, but Amazon ads were up huge. We’ve got Search ads up huge. By the way, I directly relate this to the new Edge that Microsoft has that quite frankly is incredible. And every new Windows PC that you get it brings up Edge and Edge is a very, very good product.