Microsoft has Blow Out Quarter 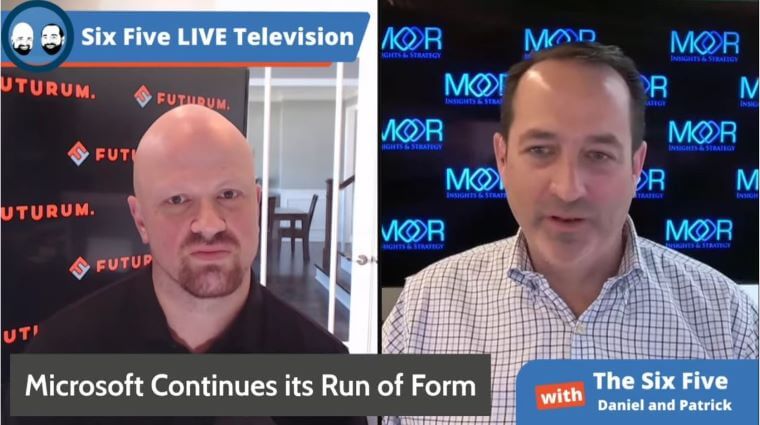 The Six Five team explores the latest blow out earnings report from Microsoft.

Patrick Moorhead: Hey, Daniel, let’s dive into Cloud and operating system giant Microsoft. They had a blow out quarter, as well. Overall revenue, not as impressive as let’s say an AMD. But, very impressive when you look at the scale and the profitability of 19%. Net income was up 44%. That’s gap, not non gap. But to me, key messages are, business was growing where it needed to grow. Where you would expect it to grow. The businesses that weren’t doing very well were ones you wouldn’t expect them to do very well. When you look at SaaS, when you look at Cloud. Azure, Dynamics 365.

X-Box right? People are home playing games. It was up 34%. But, the number one key here is Azure. Up 50% on a base that I have no idea what it is. In terms of dollars yet. And things that weren’t… Server was up 3%. That’s on Prem. Windows server. Something you wouldn’t expect to be up because, as we’ve seen, a lot of the on-prem businesses aren’t growing substantially. The one final thing I’ll point out is that Surface was only up, it was up 12%, which was good. But, when you’ve got Apple coming in, up 70% in Mac Books and the market’s going up 50%, it’s less impressive. The number is 50% on a unit basis. We don’t know revenue. Surface does have some lower priced options. But still, I’d like to see Surface in the 30, 40% growth rates in the future.

Daniel Newman: Yeah. It’s interesting. The ASPs are up on a lot of the chips for client. We’re seeing growth. Huge growth from AMD. But, Intel had a record quarter there, as well, which Surface has variants of both. I think that’s been a little bit of a puzzling spot for me in the overall earnings for Microsoft, the past few quarters, is that as strong as PC has been, the Surface, hasn’t been a little stronger. But, let’s look at the top. I like your comment about Azure. We don’t know exactly what it is, but we know that the market is looking at that 50% growth and continuing to see it 50 plus. Just a few quarters ago, it was running hot. In the eighties and seventies. Then it quickly fell in the beginning part of the pandemic, down into the forties. People were wondering if they were going to follow the trajectory of the AWS number which had a law of large numbers. Shrinkage and growth quarter over quarter.

We’re now seeing it stabilizing in the high twenties, low thirties, over at AWS. It looks like Azure, for now, is stabilizing in that forties and fifties. But again, as you said, we’re not really getting a clear indicator on that broken out number. But, we do know that the intelligent cloud business is very large. But Pat, here’s the thing. For two quarters in a row, Microsoft has, I believe… I’m just counting it down. I think it’s 10 segments that they break their business into. Not one of them retracted this quarter. 10 segments. All of them grew. The smallest growth was in office consumer products at about 5%. And the largest was Azure. X-Box was up 34%. The company really is delivering on its promise across all of its business units. It’s showing that there’s still room to run and room to grow.

That’s probably one of the most impressive things, Pat. This was the largest year on year, revenue growth quarter for Microsoft since 2018. All of the successful quarters that the companies had between 2018 and now, this has been the best. It’s just another bellwether moment for the tech industry, that tech is on fire. Microsoft is highly diversified. But as I said, this wasn’t growth. Even the Google thing where we talked, or Alphabet, where we talked about ads offsetting, they’re growing in every group. They’re profitable. Their margins are up. They’re operating very successfully. Dynamics 365 is growing. That’s their Cloud ERP CRM. It’s growing in the forties. In the forties percentage. You got to compare that with a Salesforce that’s growing around, on their CRM sales, in the teens, and on their overall product mix, in the twenties.
I’ve made suggestions before, that Microsoft is catching. Based on just those percentages, it may be a long route before it would catch. But, they’re growing at a faster pace than the leader.

Daniel Newman: Similar to here is what’s happening with Azure versus AWS. Azure is making some material gains. Now again, AWS is over 13 billion. We’ll talk more about that later. But, Azure is growing at a faster rate continuously quarter over quarter, which does mean, like you mentioned, with AMD making market share gains on certain big parts of Intel. Azure is doing something similar with certain parts of AWS. Buts overall really solid.