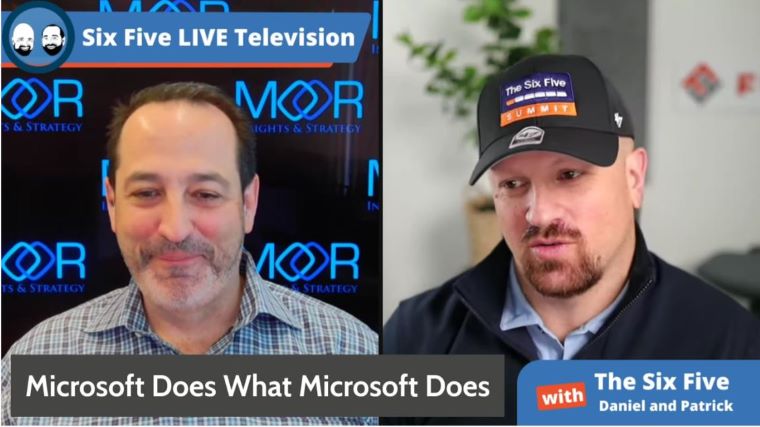 The Six Five team dives into the Q3 earnings from Microsoft.

Patrick Moorhead: Let’s move to Microsoft, Daniel. And Microsoft pretty much did what Microsoft does.

Daniel Newman: Yeah, I came out last week, I made the call that earnings this week were going to be really good. And I know maybe that’s a risky call-

Daniel Newman: … Maybe it wasn’t a big risk there, Pat, but with all of the tech wreck right now, considering 40% of the NASDAQ is down half, you would be expecting the numbers to be bad. Or at least guidance to be bad, you expected, “Maybe, okay, one more good quarter and then some really bad guidance. And then the bottom falls out.” Because the market’s forward looking. So the market had already sold because they thought the long term was bad. The discount rate would be meaning growth slows and the valuations are too high. And the multiples on either earnings or revenues were too high. And I guess I just don’t believe that that’s actually right anymore. Now that we’ve had so much correction. And it’s a little bit of personal interest as someone that likes growth. But look, Microsoft beat pretty significantly on revenue. And when I say significantly, 51.73 versus 50.8, so a billion dollars above expectations. And then beat on a per share basis at 2.48 versus 2.31 yield, and then beat on a per share basis at 248 versus 231. The whole story there though is Microsoft probably has one of the most robust and diversified subsets of offerings on the planet right now. They address consumer through things like gaming and Surface. They address enterprise through Windows, Azure, Enterprise software, Dynamics. And of course, they’re so big and so diversified that they’re a really great bellwether for what enterprises and consumers are doing.

But pretty much every place up and down. I think the most modest growth across the company’s portfolio was Surface, which continues to be a little bit of a… I haven’t quite figured that out yet, Pat, but I’ve got a bit of a thesis I’m developing. I’m not going to share it yet on why Surface hasn’t grown faster. But that even came in at 8%. The company just dropped $68.7 billion, all cash, assuming they can get through a regulatory to buy Activision and acquire another 400 million monthly users in a consumer space. That’s another very bullish sign that they think consumer activity and spending is going to stay high, and of course that they feel that their cash is better off invested right now than sitting in the bank offering the company security.

But the other thing that was probably important to point out is the company’s guidance. They’re saying they’re going to beat again on revenue, somewhat significantly. Their entire range was above consensus. They came in at 485 to 493 and the consensus was 49.2. So they’re expecting another possible billion-dollar beat. I know billions become a small number somewhere along the line, by the way. Like only a billion? And they basically expect their margins to widen.

We were just having this whole talk, Pat, about how margins are going to consolidate a little bit for Intel, because they’re making all this Capex investment. Well, Intel’s actually starting to bear the fruits of more margin from all their infrastructure investment, because well, let’s face it. It’s the pivot to subscription. The pivot to subscription has been a huge winner for the company. So there’s too much to talk about and I don’t want to spend any more time on trying to run through all this. I want to give you a little bit of oxygen here. But Pat, I just can’t find much bad in Microsoft’s results this quarter.

Patrick Moorhead: Yeah, hang on, let me get my oxygen mask and put it on.

Patrick Moorhead: I got to tell you, man, you machine gunned down the list of… No, no, listen. With Microsoft and how diverse their business is, there’s always room to talk through. And I wanted to put a little bit of color on a few items. So first off, Surface, right? They had back-to-back negative big-time, like negative 20% quarters. And even I was maybe questioning, hey, is this a supply chain issue or maybe is it a strategy change? I am absolutely, 100% convinced it was a supply chain issue and it was short-term. Nobody has told me this, but I’m also going to speculate that when it came down to their Windows partners getting parts and Surface getting parts, I think there may have been some deferment there.

And I do think Surface is strategic, even though it was one of the least highest growing strategic businesses that they had. And I’m super excited to see what the companies bring out in the future. Search and ads up 32%. Here’s the company that isn’t really noted for advertising, pretty much crushing it. Windows, 1.4 billion Windows DAO. Okay? Think about that. That’s nearly as big as iOS and Android. But it’s a freaking PC. And if you want to check out more about Windows’ progress, Panos Panay had a blog you guys should check out for all of that.

The other thing that was a new thing was talking about Azure Arc, which is essentially Kubernetes’ control layer to do multi cloud. And that was a 3X growth. Now, I want the number. X growth doesn’t mean a lot. But I’m hopeful, because they threw that out there, we’ll be seeing more on that. And I feel like Google Cloud, Oracle Cloud, IBM Cloud is all in on multi cloud. Azure’s kind of in on it and AWS is not in it. When you’re the category leader in IaaS, why the heck would you lead with multi cloud, which is essentially an off ramp to your competitors?

And there’s still challenges with multi cloud, like security. Single sign-on. Networking. All that stuff. Data. Data management. But pretty interesting. The final thing I’ll throw out there, security. They gave more depth to their security business than I’ve seen anywhere. And they threw out $15 billion annual business, 700,000 security customers, 45% year on year growth. Incredible. What’s Microsoft’s next big step here, Daniel? A couple things going on. What’s the next big step? Is it general consumer?

Because we know they’re absolutely going after gaming. They’ve been strong in gaming. They have 25 million Game Pass subscribers. But general consumer and gaming are two different things. Game is a subset of the general consumer, and I’d posit that Apple and Google are more consumer customers. So I’m looking forward to seeing Microsoft’s play. I’m trying to brainstorm and think what they could do in the enterprise that they’re not in. IaaS, PaaS, and SaaS, they’re kind of in everything at this… And they’re operating at planet scale. Exciting stuff.
And then the final thing, and I know this isn’t part of our discussion, Daniel, but maybe sometime in the future we can talk about big tech companies getting bigger versus room for smaller companies. I mean, these numbers are absolutely off the charts from Apple and Microsoft.

Daniel Newman: Yeah, they’re so well run right now. And we’re not just talking about big tech getting bigger. We’re really talking about this whole FDC, how big can big tech get before it starts to become problematic for competition? And then of course, these opposing forces of really happy customers that love being able to get everything from one place versus the harm it might do to allowing new and exciting companies to come into market and compete.

Yeah, let’s put that on the docket for a week when we don’t have 7,000 earnings and news to talk about, Pat. But yeah, we could definitely dive into that one. But we’re still on topic two, and we’re now at the 6:11 is our pace right now. So we’ve probably got to keep moving.