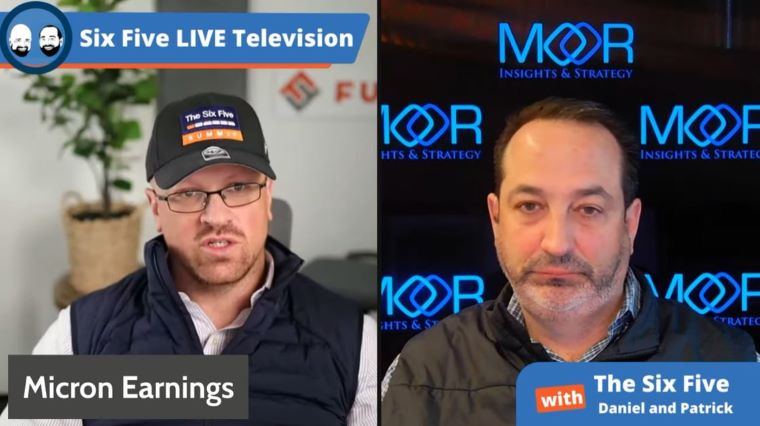 The Six Five team dives into the latest earnings report from Micron.

Patrick Moorhead: Daniel, let’s move to the next topic and that is Micron earnings. I think this is the first time Daniel, we’ve talked about Micron earnings on the show.

Daniel Newman: Well, look Pat, there’s nothing more popular right now in the tech press and media than semiconductors. I said, what are you going to run the app on? Air? We also need, you need memory and storage and with every workload and every bit of compute you additionally need more memory and storage. So, it’s been a really interesting opportunity right now to talk about what’s going on there. Then of course, there’s the supply chain, there’s the Ukraine-Russia war. So, semiconductors are even more in focus. With a company like Micron, what was the focus? Well, first of all, high level Pat, and since we don’t just repeat the news, I’m going to be straightforward and just say this, beat on earnings, beat on revenue, strong forward guidance, looked very encouraging. What did the market glom onto after he was able to outpace?

Well, one is where’s growth coming from? Well, for Micron, growth is coming from the data center. That’s the big part of the business that’s been growing. So, I think there’s a lot of worries about what’s going to happen to memory and storage when some of secular trends go cyclical. So, we’ve had secular trends in PC growth and adoption. We’ve had secular trends in smartphones. We had a pile of stimulus pumped into the market that drove people to buy more of these things. Then on top of that, you had schools forced to outfit every kid with a PC. You had workforces forced to give every employee PCs or update to new PCs.

We’ve seen the PC market be incredibly robust. I think both of us would agree Pat, that the PC market will stay robust beyond what most think. Meaning, this isn’t a trend that’s going to reverse and go down 25%. But there is a good chance, Pat, in the next few quarters, the trend will reverse and it will slow a little bit.

So, Micron’s been working hard to shift into areas to be able to support with NAND, things like the 5G trend with mobile devices, data center and the importance of additional storage and memory technologies, they’re seeing 60% growth year over year in this most recent quarter. Also, moving to things like automotive and memory and storage, which is another area that’s very important.

Pat, what did the analysts focus on? Well, this is kind of interesting. Everybody wanted to know about what’s going to happen with neon gas and other raw materials. So, we’re hearing this again. This is the thing now, about half of the world’s neon gas is produced in the Ukraine and it is important for what’s known as lithography, which is basically the way you see these little circuits etched onto the wafers or onto the circuits.

So, most of these companies, Pat, have already dealt with this. They’ve been dealing with this for some time and going through the supply chain resiliency activities over the last couple of years, they’ve been diversifying where they’re getting. Mehrota, I don’t say that out loud very … Sanjay Mehrota, the CEO of Micron, did say that there is a chance that some of these raw materials could go up in cost if there is a need to acquire them from different sources and if this war was to linger on too long and all this manufacturing stopped, Pat. Also, they shut down China again. They had like cases of COVID and they shut down parts of Shanghai. Very interesting, can’t figure out exactly how that works, but that has also created a little bit of worry that there could be some other supply chain disruptions coming out of China.

Overall on the call, it seemed the company was very confident that it would manage it. It’s diversified its supply chain and that it would be able to handle. There might be some additional costs. Pat, my take on it is that there is some elasticity but in memory and storage, less elasticity than in say, general purpose CPUs, where there tends to be more flexibility on pricing.

So, overall though, the company seems to be in good shape, seems to have its supply chain in order. It’s growth and data center has been in impressive. It’s got an outlook of mid team growth for DRAM 30% growth for NAND. I personally believe that their sustainable growth has to come from the strength and data center, but also the growth and adoption in 5G and then their automotive and industrial efforts.

Patrick Moorhead: Wow, you did well here. So, the company beat on the top and beat on the bottom. If you want to compare beats, it was the biggest beat on revenue in over a year, which was really good. The biggest beat on EPS for three quarters, where it goes all the way back to Q3 of ’21 when they beat by 9%, but they beat 8% here. So they’re crushing it. What I wanted to comment on is how strategic the company is and how strategic storage and memory is going to be more even in the future. It’s pretty easy to say, we see this, all these data slides that shows how data’s growing and storage and memory are essentially directly in line with those, more storage than memory, as memory typically goes up in increments. But what we’re going to see, the future of the data center, Micron really is driving that future.

So, Micron is working on very high speed memory that’s composable, through what’s called an interface called CXL that is really the industry standard. It was pioneered by Intel to be able to have pools of memory. So, imagine having a rack full of memory, just like you have a rack full of storage, and like you have a full of CPU. So, we’re a couple years away, but I’m talking with all of the major CSPs out there and all of the major enterprise compute players, like the HPEs, and the Dells, and the Lenovos, and the Ciscos about really this being the next big change inside the data center.

So, it’s not just commodity stuff folks, it’s technology that’s going to be re-architecting the data centers of the future. So, good stuff.