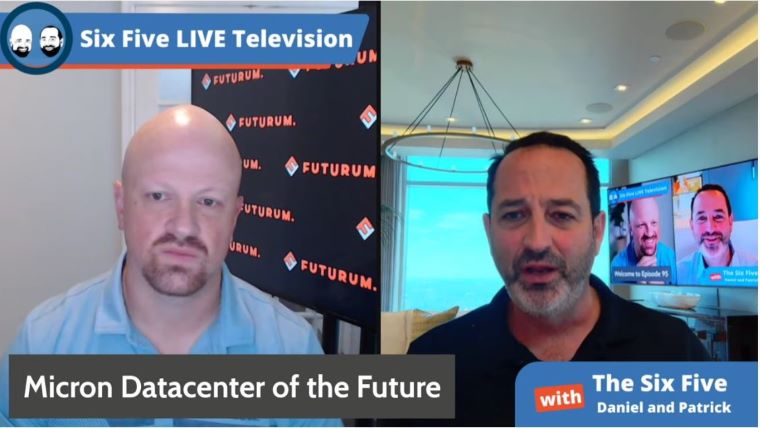 The Six Five team dives into announcements coming out of the Micron Datacenter of the Future/7400 SSD Event.

These guys are great. Jeremy Warner, he’s the storage head and Raj Hazra, you might have remembered him from some compute jobs he’s been in, but he’s now the computer networking head for Micron. And essentially, what compute means is memory. And we have this great discussion. And I think where I was left with Daniel and I’ve this whole notion of composable memory, okay, where today, if you want more memory in the data center, you probably have to buy a new compute node. But why do we have to do that when it comes to storage? You can put a sand, you can put a NAZ, you can make a composable. And that is how the big hyperscaler players have been architect in your data center. But this whole notion of the ability to, if you want more memory, you have a rack of memory. Imagine that like having a rack of storage.

So that is the future and it’s a standard called CXL that they’re working on it. And I have personally talked to architects at the largest hyperscalers and that is the next big thing. Micron is leading the pack when it comes into that compared even to, in my opinion, compared to Samsung and what Hynix is doing out there. And certainly, Micron is doing a lot of thought leadership. I had the pleasure that same day that Mion came out with their 7,400 SSD line. And essentially it’s a full set of high-performance SSD with, let me see 1, 2, 3, 4, 5, 6, 7 different four factors that can hit the edge of the data center. High performance, mid-tier performance, highest security, good security, all of these different flavors. And I was really left thinking, it’s great that SSDs now have so much heterogeneity because quite frankly, they were just one form factor for everybody.

And what that says to me is that SSDs are becoming even more important, which gets all the way back to Daniel. A lot of what I’ve seen you talking about related to consumer behavior and this notion of I want it now, I want it fast and I want it free. And then a flip side, the SSD folks are like, okay, well, how do I do that and use less energy to protect the environment? So probably going to do a writeup on it. It was really fascinating, but I appreciated Micron having me on.

Daniel Newman: Yeah, it was great to see you there. Micron has been kind of a little bit of an unsung hero of the semiconductor space here. The company has performed very well. Storage, memory doesn’t always get the same excitement that a compute does. It just is what it is, but Micron has been extremely competitive. We’ve heard from the company that they’ve been innovative, they’re trying to knock down barriers to helping an enterprise scale data center of the future. Look, if you don’t have the memory and storage, you need all that compute? Is it relevant? You need the data to serve the applications. This stuff works harmoniously here, Pat, and Micron is very much at the center of this.

I’d say just to keep our show moving, this will be one to watch. It’s a company to keep an eye on. I would hope that when you have a link to your piece for people that want to maybe read a little bit more in depth here, you’ll drop it out there for everybody. But yeah, great day for Micron great event. And the host was pretty good as well. I’d give him a seven.

Patrick Moorhead: Yeah, I appreciate that, even though I have to wear a code. I didn’t have to wear a coat, but when you see people show up with coats, you kind of got to put the coat on. But no, it’s good in it. I’d love to have Micron around The Six Five Summit as well to talk to them. I’ve never seen more action on memory side and Daniel, I kind of did my career as 10, 10, 10. I guess, 10, 11, 10, but on the systems providers and then the chip part, and then the analyst thing. And I even see Intel and Andy talking about memory more and more.