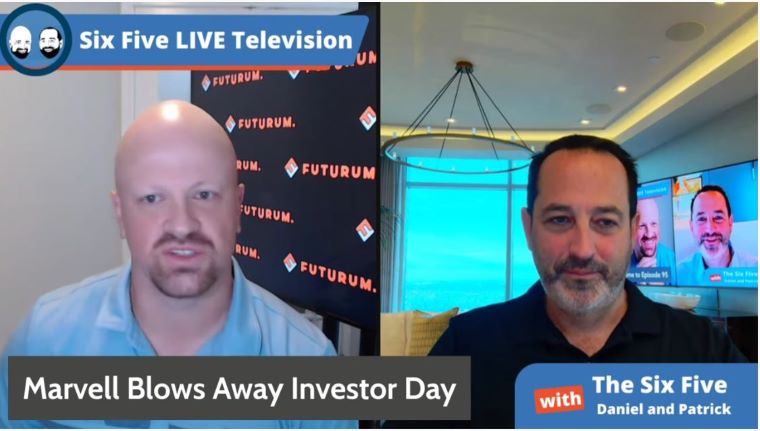 Daniel Newman: You and I watch a lot of investors. Now, we’re+ always very clear here, we talk about earnings and investor days, not through the lens of us competing with equities analysts or sell and buy site, we really try to inform that audience. We try to provide technical depth, strategic vision, and then we couple it with what we call the truth serum that comes out through SCC requirements, because you can put architecture around anything and make a new launch, exciting and tell a story and get everybody really pumped up. But the numbers don’t lie. And so investor days are always interesting, because it’s kind of the confluence of those two things. It tends to be a big dose of numbers and a big dose of product and innovation strategy. I tweeted this Pat. I said, Marvell probably had one of the best investor days that I have ever seen in terms of one, I think the stock went up six bucks on the day of their investor day.

And again, they were trading in the 50s and it went into the 60s. So this wasn’t like a $400 stock that went to 406. This was a stock that made a 10% move as a result of its investor day. And so, first and foremost, the market loved what Marvel had to say. Now, you and I have been very bullish on Marvel. I’ve written articles on MarketWatch. I’ve called them a semiconductor name. I still occasionally run into people when I say Marvel that think I’m talking about the comic book company, not the case at all. But I’m going to hit some of these updates really quickly here, because Marvell is a company that kind of came out of what was a very difficult period, made a great hire in Matt Murphy, CEO, a really smart acquisition with Cavium, changed its direction from consumer to enterprise, entered all the right secular areas, getting a data center automotive 5G.

And in this investor day basically came out upping its outlook for revenue by a 5% swing from 10 to 15% now to 15 to 20%, noted that its market opportunity because of the semiconductor, boom has been so strong has increased 50% now. They see an opportunity at $30 billion. Their cloud business and their 5G and auto revenues are going to grow at twice the speed of the market. They see it as 40% per year. They raise their outlook for big hundred million dollar plus customers now to now having 19. Now it doesn’t sound like a lot, but 1900 million dollar customers is a $1.9 billion run rate. And that’s a hundred is the base. Some of them are spending more than that. And on top of that, in semiconductors, we always say, we’re not trying to get every Joe to buy their brand. They know who their customers are. They know who the people are, that they’re going to try to sell to, whether it’s data center, automotive.

And then of course their design way now look doubled as all part of this announcement path. So I mean, what a tremendous financial pathway for investors to just see the potential of this stock. So they got some upgrades right away from those analysts that do set that. Now, of course, on the technology side, I’ll kind of lean into this a bit and then I’m gonna pass it to you, so I can leave you a little something to talk about here. But one, the cloud optimized-silicon was a huge part of their story. There are no VM acquisition, all about creating this fabric and this connectivity layer to be able to address this cloud market that they’ve identified. They’re building on… We can have a little debate about the marchitecture here, but they’re continuing to build on the most advanced process nodes from TSMC, moving from what TSMC calls a five nanometer, we’ll just call it TSMC five to three.

And that’s all part of their plan. And probably the last thing that I thought was really, really awesome on the tech side was they got their first big automotive win and I’m talking at the CPU system levels. They’re jumping right in Pat and they’re going toe to toe for that full automotive system. We’ll talk more about that with Qualcomm in a few minutes, but Marvell’s not running from anyone. They’re working side by side, they’re competing, they’re winning big customers and they’re not afraid. And then of course they had a whole bunch about the company, the corporate sustainability, DEI, doing some really good stuff there, Pat, but God, have you seen an investor day that was more inspired than Matt Murphy and his team at this go around. I don’t know if I have.

Patrick Moorhead: Yeah, everybody likes a comeback story and listen, I’ve been interacting with Marvell since its existence, consumer, hard drive, controller play is what I knew them for. And in the past five years under Matt Murphy’s leadership, he has four X this, okay. 397% the past five years. And he started a little bit before that, and that speaks for itself. And like you said, we’re not securities analysts, but I personally like to tune in because it is the source of truth. It’s a one stop shop to get everything about the company strategically to see if something has changed, to see measurement against what they promised before. And yeah, they absolutely brought it. I mean, the company’s just… It’s indistinguishable from itself five years ago. And a lot of that is to deduced with some intelligent divestitures, but most importantly, some very important acquisitions.

And if you’ve never been part of an acquisition or a divestiture, don’t underestimate how hard it is to disintegrate and integrate. And so it’s not just Matt and company buying a company and then taking its revenue and moving it. These companies are growing after they’ve been acquired, whether it’s Aquantia, the latest one in five. Cavium, Avera Semi, Qlogic. The list goes on and on where consumer now is this tiny shred of peace. And really when I look at it, the only companies in its competitive sphere right now. Sure, there’s a little of Nvidia in networking and some of the AI work that they do. Potentially some AMD, if the acquisition goes through for Xilinx. But they’re very unique in that they are the really the only one stop shop for what they do in this area.

One other thing that I really want people to keep their eye on though in the future, and this is where I’ll end is, I love their take on heterogeneous compute, and as the wave of the future. And they found a way to do this level of customization for their customers and inserting their own special IP, whether it be through an ASIC or something like that. And that is the future. Multiple ways you can do that. We see how Intel does it with 3D packaging, AMD has talked about a little bit how they might do it in the future, but that is the future. So I’m really excited about them as a company.

Daniel Newman: They also by the way been kind of kicking Broadcom pretty hard. When you look at where that growth is coming from, first and foremost, it’s been oppressive across the world.