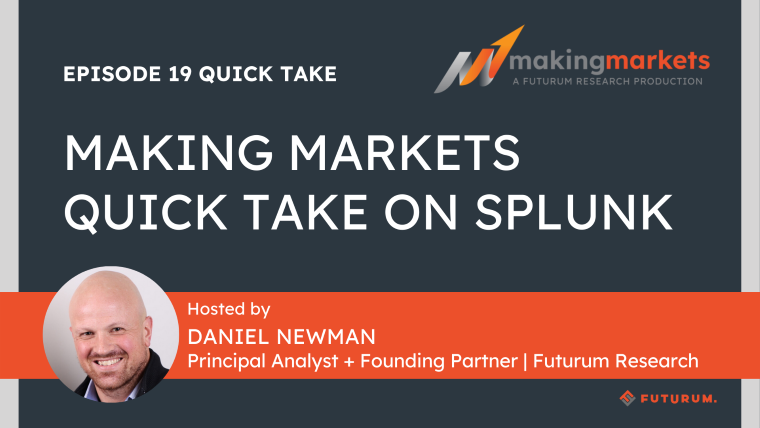 In this quick take from the Making Markets podcast, host Daniel Newman talks about this quarter’s happenings at Splunk, including the abrupt departure of their CEO Doug Merritt, and his replacement, Graham Smith, who is stepping in as interim CEO. Splunk is focused on positioning themselves for long-term growth and anticipates its cloud business hitting $2 billion in the next fiscal year. In terms of its numbers, the company seems to be doing well across the board, with total revenue growth up about 20% to $665 million and impressive growth in its customer base. Despite this success, their stock share price isn’t doing as well, but this is where he thinks patience will pay off.

Daniel Newman: Let’s move over now to the third and that’s going to be Splunk. Now Splunk is a company that I track pretty closely and Splunk’s had a really interesting couple of months. Kind of on an abrupt basis, Splunk CEO, Doug Merritt stepped down. That was after a long run. Doug is someone that I’ve spoken to many times, he’s been on my show. He’s been on Six Five, our event and in our summit he’s been a keynote.

And he is been a good leader. Someone that I really admire and he’s a fellow Austinite here, but you know what? Change happens, and so now Graham Smith, he’s taken the interim CEO and chair role at Splunk. And this all happened during this quarter. So let’s talk a little bit about what happened. Over the last couple years, Splunk is not a company that’s making profits yet. It’s growing fast. It’s been focused on fast growth and that’s been what I think the market wants to see. In this quarter it saw it’s cloud recurring revenue, which again, this is a company that pivoted from a license and prem model to a fully cloud and ARR model over the last year. It saw it’s cloud ARR jump 75% to over a billion dollars.

It’s net new cloud ARR grew 107% in the third quarter. It’s thinking that it’s going to be at about a 70% cloud mix in its Q4, which is coming up. And it believes that it’s cloud business is going to hit $2 billion in the next fiscal year. So while it’s definitely getting to that time where people are going, “Hey, when is Splunk going to start making money? What’s going on? It’s had a lot of changes at the leadership ranks. Doug had left, their CTO Tim Tully had left.” But in terms of its numbers, the company seems to be doing well. ARR growth across the board, cloud growth. Total revenue growth in this quarter was up about 20% to 665 million. And another area that I’ve been really watching is customer with large spend growth. And that means customers spending over a million dollars. The company has seen 270 customers in the cloud now that are spending more than a million.

That’s a 96% growth and 635 over all customers with ARR above a million that represented 43% growth. So Splunk doing pretty well, but the share price is not. And so that means the market’s still looking for something else. I think the changes in leader have probably been a big driver. Of course, like I said, the market volatility and some of the negative sentiments towards growth that has happened over the last month have all been factors in what’s driving Splunk down. But if you believe in the whole data to everything and the importance of data in enabling an enterprise to run and to be successful and to be secure and to manage operations on a global scale, Splunk is in a great spot when it comes to observability and that company has continued to perform, continued to grow. But it’s one of those ones I believe you’re going to have to be a little bit more patient with.