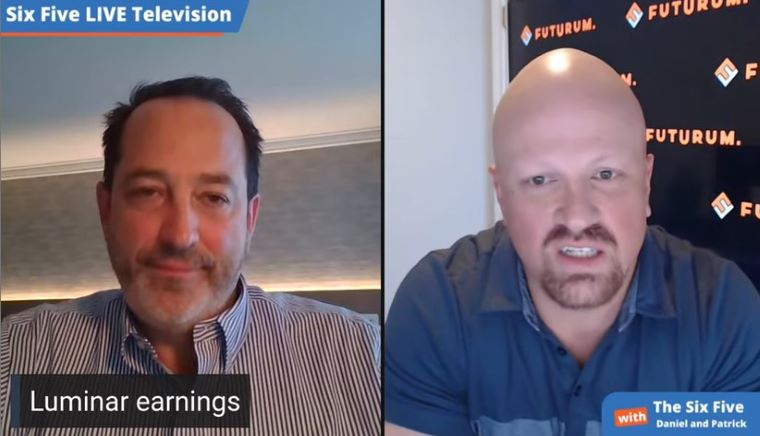 The Six Five team dives into Luminar’s earnings on the second episode of Earnings Palooza!

Daniel Newman: This one is a company you and I both really like. Very interested in the company. It’s early days, so let’s be very clear. The revenue guide for all of next year is $40 to $45 million. This is not a company that’s doing massive revenue. This is a company that’s all about building the technology moat and winning design relationships with key companies. And this quarter the company showed good growth in revenue, beat by a significant number over expectation. By the way, this is a company that is doing $40, $45 million revenue guides and is buying its own stock back. So it clearly sees that it has a long term opportunity that the company’s sitting on a good amount of cash, so it’s able to operate with a long term in mind. It’s still burning cash. And that’s probably what most people are concerned about is we’re in an economy right now where nobody likes a company that burns cash.

You can look at, by the way, one of my favorite companies that’s getting absolutely railroaded today, Draft Kings grew 130% revenue but guided a bigger loss next year. And it is getting freaking slaughtered today because right now nobody cares about growth if it doesn’t come with profits. So you got to have both. That’s going to be the longer ramp. But for companies that have enough cash to operate and know what they’re building and know that they’re differentiated, they’re not, I’m not selling one share. I’m not selling one share. Keep going, keep growing. Big thing for this quarter path with Luminar was they got that production unit with SAIC, the Rising Auto Unit is shipping in China. And so what we’re starting to see is Luminar’s technology, the technology that uses multi-sensing for these vehicles and has a, what we can say from our experience and our training, a better safety profile and more sophistication than single sensing our friend Elon is doing.

He’s not really our friend. I’d like it to be his friend. I think he’s really cool. If he wants to come on the show, I’d love to have him. And I think the multi-sensing is differentiated. But getting the cost to scale is going to be important, but getting these out in the market, getting Mercedes, Polestar, Volvo, SAIC, big wins for the company, getting production units, big win, winning in one of the world’s largest EV and smart car markets, China was a big win. So it was a good quarter overall for Austin and the gang over at Luminar.

Patrick Moorhead: Yeah, talk about a good earnings deck. I mean, they just crank it out. And like you said, and this is true, so Luminar not only does the assembly of the LiDAR system, but it also does all the semiconductors inside of it. And whether it’s manufacturing the devices or doing assembly, scale absolutely matters. And they just started production now. So my expectation when SAIC4, which by the way, China’s largest automaker, that gets out. Polestar comes out with Polestar 3, and Volvo brings out the EX90 I think on, gosh, like five days next week. I mean those numbers just have to go in the stratosphere. And one of the things, there’s four or five people that are in this market right now and I really think what sets, one of the biggest thing that sets Luminar apart is they’re actually shipping.

A lot of people have roadmaps and a lot of people are sampling, sampling devices, sampling full assemblies, but they’re so far out. So we’re going to see, I think not just the perceptual lead, but the financial lead make some of its biggest moves out there. So again, I’m super interested in what the future holds with them. I’m hearing we might have a trip down to visit their headquarters in Orlando, and it’s going to be awesome. I like going through factory tours, I like going through headquarters of startups, super fun. And I’m just waiting for Austin to maybe send me a test car to review. Think that’s going to happen?

Daniel Newman: I would hate to break it to you, but don’t come to my house and look at my driveway.

Patrick Moorhead: Okay. Yeah, no room, I get it. Once NVIDIA sent me an Audi A8L that had their silicon in the dashboard, it was so amazing. I thought they were kidding. Michael Lim’s like, “Hey, you want to do a review?” I’m like, “On what,” “An Audi A8”. I said, “Well you going to send me one?” He said “Yes.” So, good car.