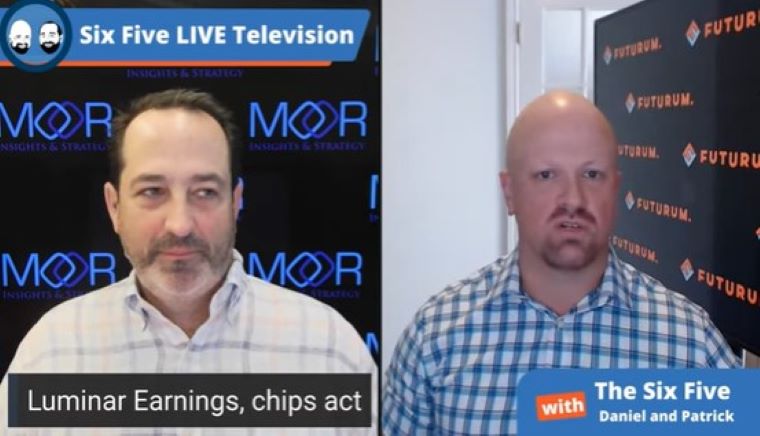 Daniel Newman: Luminar Technology is one that we talk on this pod a lot about. And I think, Pat, what got us talking a lot about it was the opportunities that we’ve had in the past to actually experience what Luminar is doing. So we all know the autonomous vehicle of the future, electric vehicles they’re in vogue, the new deflation act, the Inflation Reduction Act-

Patrick Moorhead: Can you even say that with a straight face?

Daniel Newman: Can’t. I can’t. And by the way, it’s not partisan for me. It’s just stupidity. It’s purely stupidity. You can’t spend a trillion dollars or even close to that. Give a bunch of incentives to make people buy stuff, and then say, it’s going to reduce inflation. Disingenuous is a good word.

But anyways, it’s going to push forward EVs and it will be good, I think, for the EV industry. So who’s going to win there? Well, Tesla is going to win of course. Although we don’t recognize them as an EV maker here in the US apparently. But Luminar is a really interesting company in this particular space because they build a LIDAR based technology that can be added to the other traditional radar and vision, to be able to provide a safety profile in the next generation of autonomous driving that is incredibly impressive. We’ve done the side by side. We’ve experienced what it looks like in a swerve, in a straight on, in a child running out from behind a car situation. And Pat, we were always impressed.

So we’ve been following this company closely. Let’s just say this, it’s early day. So we just got done talking about a company doing billions in revenue. Luminar is still very small in terms of its revenue. This is a company publicly traded has over $600 million in cash on the balance sheet, but is doing about 10 million during Q2. Growing at 57% on a year over year basis, losing money at this point. But it’s investing massively in future growth, company has some really great OEM partnerships companies like Nissan companies like Mercedes-Benz, Volvo are looking at using the technology that have provided. This is building up one of these multi hundreds of million/billion dollar pipelines for Luminar.

So the longer term, the company’s expanding, it’s investing, it’s adding factory and fabrication in Mexico. And really this is a company that’s building for the future. We all know the process of moving from here to full autonomy is going to take multiple years. We all know that safety sometimes takes a backseat, that’s a great metaphor, to price and efficiency. LIDAR has historically been more expensive. Although this company is building economies of scale to take the cost of LIDAR, putting it into vehicles and making it affordable for everyone. And by the way, if you value your life you might want to think about using the best technology, not the one that doesn’t just crash into buildings.

Daniel Newman: I’m just saying that are certain companies that are using purely computer vision that have a little bit of a track record of running into things.

Daniel Newman: I let you let it rip. I’m here to be diplomatic.

Daniel Newman: I’m diplomatic. You’re the let it ripper of the show. But anyways, so I guess long and short the company put on it basically is presentation. Listen through it. Again, this is a long term company that you have to think is in a great position. They’re seeing big growth in commercial wins, 60%. They’re seeing big growth in order books, 60% forward looking order. They’re calling for something like 40, 45 million in revenue. So again, it’s not today wildly massive production thing, but you look at the partners they have you look at the technology, the importance of combining all the different sensors in a vehicle, and then you build it forward in some of the world’s most prolific companies, F1 almost champions, Mercedes Benz. Nissan. I didn’t know if you drop it in there. I know you’re a Red Bull guy. But long and short is I think they’re on the right path. You and I’ve talked many times as CEO, Austin Russell. I like where it’s heading, I like the fact that the technology is being built with the long term in mind, good future, decent result and I think it’s just a company to watch. If you believe ADAS is the future, you can’t rule out Luminar.

Patrick Moorhead: Yeah. I wanted to hit on a few things. So one of the things that I really appreciated was them giving finer granularity on where they were to hit their, as they call it, exponential scale. And that’s the ability to deliver 230, 250,000 units a year. And if you look at some of the other LIDAR folks out there, they look the other way when you ask them about high volume manufacturing and the details about that. As you can see in the lower right hand corner, they provided a lot of information out there. A dedicated facility which would be online in the second half of next year. I thought that was a super interesting piece and that kind of got me thinking, which was, hey, it seems like Luminar should be able to get access to the CHIPS Act money because they do have many patents and they do research on packaging for LIDAR that other people simply don’t do.

Again, I never thought of Luminar and a potential CHIPS Act recipient, but if they’re doing research, which they are, they are working with partners. I don’t think CHIPS Act to open up stuff in Mexico is going to fly, it won’t. But the core research on manufacturing, LIDAR and LIDAR SOCs, I think they should have a pretty good shot.

The other thing that I thought was interesting this week, and Daniel, you intimated it a little bit here. Let me pull this up. Austin was actually on Fox Business News, and they wanted his response to Nader calling Tesla’s manslaughter machines. It was funny, you and I at CES, we saw up front and personal the Tesla hitting the kid because it didn’t have the ability to swerve out of the way. And Daniel, you might not even have the, I don’t know, the history of who Ralph Nader even is. But yeah, he was the big death at any speed really got seat belts as a standard operating unit. But the macro point here is can Tesla make a safe car without LIDAR?

Anyways, good stuff. I didn’t talk at all about Luminar earnings. I talked about a couple other things, but they’re in the news doing some really interesting stuff, Daniel.

Daniel Newman: Well when we do our best work here we leave each other something to talk about. But when we do our best self aggrandizing we cover everything and then we leave the other and see what we’re capable of here. But I do like that you called out the things, folks at Lumina are going to love you for calling those things out because I didn’t mention it but I did think about it. Some of the R and D stuff, this has to be part of this CHIPS and science Act. We have to be looking at innovators and disruptors. So really good call out there Pat, I’m glad you caught that.