Luminar and Mercedes-Benz Team Up 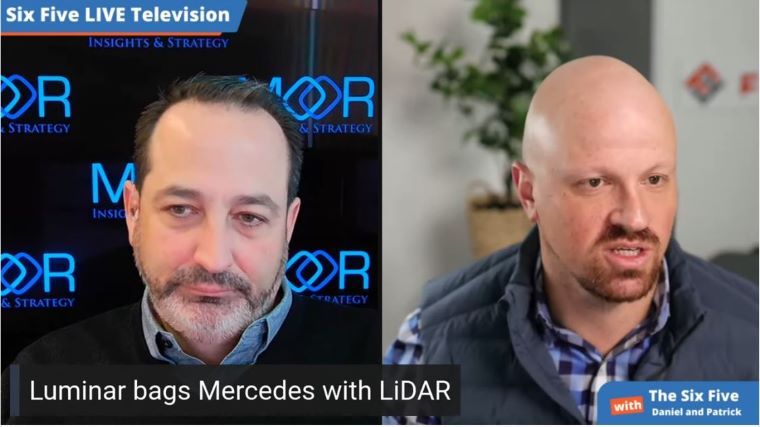 The Six Five team dives into the Luminar and Mercedes-Benz partnership.

Daniel Newman: Pat, our friend, Austin Russell and Luminar made another big announcement this week. You and I have been super on top of automotive. Cool announcement, one that we probably can get through pretty quickly though.

Patrick Moorhead: Yeah, it is. If you don’t know who Luminar is, they are the leading provider of LIDAR solutions. LIDAR is essentially laser beams that work alongside of radar, which is shorter range, and visual systems or cameras for safety systems, and in the future, self-driving cars. There was a lot of debate about LIDAR, Elon Musk essentially saying it’s a folly and he’s not going to be using LIDAR.

Well, when Elon said that, LIDAR was 10X more expensive than it was today, and had that big giant… Looked like an old cop siren on the top of an old Chevy cop car. And you still see the big spinning globe on top today, particularly in robotaxis. But Luminar has enabled not only to reduce the cost on that by by 10X, but you barely even notice that it’s there. The Volvo design was the best, but I digress.

Volvo did a big deal with them. They did an amazing demo at CES, which my son took a video on. You and I were both there, went viral. Millions of views of the Tesla running over the fake child running across the street, occluded by a car. Now here we are with Mercedes, and you can see a very smiling Austin in this picture, next to the chief supply chain guy from Mercedes. They have done a deal together and Mercedes even made an investment in the company.

No details about cars. You can see between the two gentlemen, there is a car with a sheet on it, which obviously is one of the cars that has it. One thing that I noticed, and this is a subtle thing, Daniel, I don’t know if you saw this, there’s no bulging sensor that you would expect to come out of the roof with LIDAR. I don’t know exactly what that means. Has Luminar and Mercedes found a way to shrink the sensor even more, or am I just way looking too into what could be a fake development car behind them?

Daniel Newman: Yeah. As you’ve seen, I believe in the Volvo XC90, the LIDAR technology from Luminar, they showed it, It’s front facing, forward facing, and it’s on the windshield. It sits just below, where the mirror is. It’s about the size of maybe a small Wheat Thins box or something. It goes up there. It’s actually no longer on the roof. That’s been a big part of the whole story from Luminar, is making these things less ugly.

I did see there was a humongous stock deal within this for Mercedes. By this time this morning, they’re probably down on it. But these companies don’t make these kinds of deals for the long term. There it is, Pat. You see? It’s just a tiny little… On the windshield. It’s gotten much better, much prettier, and it’s getting much smaller. Intel is using this with Mobileye right now, as they’re in the process of using and developing their own LIDAR. But Volvo’s doing it. Mercedes’s doing it.

Look, I’ve got a research note I’m publishing this morning on it, and long and short here is that Luminar continues to be disruptive. We’ve seen it, Pat. We’ve witnessed it. We’ve actually been in the car and experienced it. Technology is good. It’s interesting. It’s disruptive. I think they’re either going to be, A, they’re going to be a much, much bigger and larger player participating in many, many more of these large companies, future safety, and L4 plus, L4 Technologies, or they’re going to end up getting acquired by a mega chip company that’s going to need this technology.

And if the market stays compressed, that could be an opportunity. Although knowing Austin, I think he’s got a vision to build this thing. So I don’t necessarily see that happening.