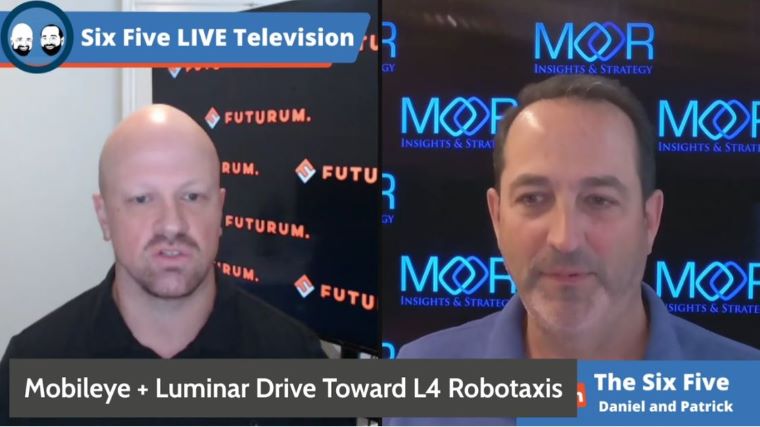 The Six Five team delves into Luminar and Intel Mobileye partnering on a Robotaxi service.

Patrick Moorhead: Let’s get to the last topic here. This is a Mobileye, Intel Mobileye, and Luminar for a Moovit robotaxi. First of all, who is Luminar, Daniel? You might want to start there.

Daniel Newman: All right, let’s go. And talk about de-SPACing. LAZR, Luminar is Lar, actually 26 year old Austin Russell and I got to spend about an hour together at the IAA mobile show. He took me into a couple of different demonstrations of LIDAR, which if you want to kind of simplify what this is, is it’s the third set. When we talk about L2 driving or what Tesla does, Tesla effectively uses computer vision. Other L2 solutions use computer vision cameras and radar as their sensing technologies. But the problem is, and some of these companies that are trying to go to this full self-driving or even partial self-driving, Pat, like the car that you drive, it allows you to take your hands off the wheel for a minute, up to a minute at a time, supposedly using the sensing of L2. But we’ve seen a lot of problems with that.

We’ve seen a lot of fiery crashes and we are still at a point where most of it is more about assisting than it is about truly self-driving but the holy grail is self-driving. Well, LIDAR is a very expensive technology, at least up to this point. When you think about that Apple car, those Google cars driving down the road with the crazy spinning hood on the top, that’s LIDAR. That is how at least most of the world sees LIDAR. Most of those systems cost tens of thousands of dollars per vehicle. It’s up to this point, been considered almost an unusable technology at scale. And so it hasn’t really been put into place, but what Luminar has built is essentially a LIDAR, which Russell told me can be done at about a $1,000 dollars a vehicle at scale right now and it can be put in.

And so what Intel Mobileye has done, and Mobileye is radar and computer vision. Has a very holistic set of maps and integrations and camera systems in a whole economy for its L2 system. But the holy grail of robotaxis is that L2 plus system that’s out in the marketplace is not going to work in a densely populated urban environment. You all hear the story about the carriage and the babysitter and the coffee shop and the crossing the road and the car has to make an instantaneous decision. Well, with LIDAR it has eyes further down the road, it’s able to see more, it’s able to do more. I’m going to give one more little thing here on this about Luminar, Pat, and I’ll let you talk more about the Intel Mobileye, Moovit partnership so that we can split this one up.

But they took me on the test track, Pat. They took me in a Tesla model 3 with the full newest software update and they did this detection with a small child in the middle of the road. And then they basically took the car to speed about 50, 60 kilometer. Had it detect it in the Tesla with the computer vision and it could not stop from hitting a kid that was in the road about a 100 meters in front of it. It was static. The kid was static and I took it, I put a video of this on Twitter, so we can put the link in the show notes to that video. The second demo they did was the same demo with LIDAR. Using the Luminar system and voila, with the LIDAR, it was able to detect further down the road. And although the braking was very abrupt, it was able to do that.

There was a third demonstration where the kid comes running out from in front of a parked car, which we all know that’s the kid chasing the ball out of the driveway. We all learned about this in driver’s ed. Well, it was also still on this kid moving in front of the car able to detect it and stop. And then there was a fourth example, by the way, worth noting of when that it has a false ID of a possible person running out in front of the road that it is able to stop where it doesn’t have the car slam, meaning it slows but actually keeps going smoothly. Because obviously every time you slam, you do jerk the driver, you create risk. LIDAR, this third sense, adds a ton of capability and the Moovit, Intel Mobileye, Luminar partnership adds a technology that can truly potentially get us to this holy grail by having enough sensing to be able to put these taxis into densely populated urban areas. This is really exciting. By the way, Moovit is part of Intel ventures portfolio.

Patrick Moorhead: Yeah. Real quick, you put these two company’s technologies together, Mobileye and Luminar and you get a service that is actually owned by Intel called Moovit. And the big announcement was they’re going to start fully autonomous service in Tel Aviv and Munich starting in 2022. What I really like about this is first off getting a company that very few people know into the spotlight. And I also like to see that Mobileye is taking a much more aggressive stance here beyond L2 Plus. If you think about where Mobileye started, it was all about L1 and then I went to L2 and L2 plus. In fact, one of the market leaders in there and a lot of trucks have their technology already but the big question was, and I think Nvidia stirred up the whole, no, you really want to be L4 or L5 if not.

And then it’s not that Mobileye didn’t have the tech or the know how, they just had to work with Intel and what Intel was doing for L5 and L4. And now we see most of the industry kind of resetting itself on L2 plus, while looking to robotaxis and L4 here. All exciting. We think quantum is slow, looking out long, we’ve been talking about self-driving cars being right around the corner but this is a good proof point that maybe we aren’t as far away as we think we are.

Daniel Newman: We’re getting close. It’s going to happen faster though, the gears are going to start turning.