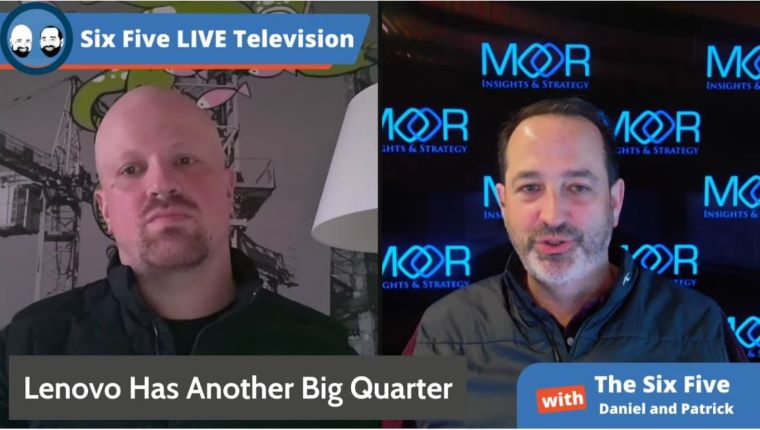 Patrick Moorhead: Lenovo just had another, blow it out quarter here. Daniel, what’s going on. We don’t normally hit Lenovo here, but we probably should. I mean, they’ve had stellar performance for the last few quarters.

Daniel Newman: I mean the company’s posting out record results, they’re very focused on their results being closely tied to digital. And actually, Pat, to their credit, this is another company that puts together a pretty thorough investor deck.

Patrick Moorhead: Yes. If you weren’t going to say it, I was going to/ I would like to see the investment thesis slide. That’s a nice one.

Daniel Newman: Absolutely. But I do like the fact that they’re breaking it down. So here’s some things just for, a lot of people don’t know, because they probably think of Lenovo, they might know of part of the business. So you might be familiar with the company for most likely PCs that used to be IBM’s ThinkPads. That is what older people probably remember. But this is a company that highly diversified. It’s got multiple businesses in intelligent devices. It’s got businesses in data center and infrastructure. It’s got a very complete set of service businesses. They have a consumption-based offering, much like GreenLake and Dell APEX that we do talk about quite frequently.

And actually, Pat, what’s been most impressive is very quietly they’ve been consistently growing at staggering rates. And so we get to talk, regularly, you and I, to Kirk Skaugen. Kirk’s one of the top execs here in the US. The data center’s his big baby. He does talk to us about all this stuff. I mean, you’re talking a company that’s seeing record income. You’re seeing record revenue, 20.1 billion in the most recent quarter. You’re seeing growth in net income significant, you’re talking about year over year, a 62% growth in the revenue.

So you’re seeing strength. The companies make it so significant investments, R&D investments. They’re expanding significant. Pat, you and I have actually been involved in some of their launches like Edge. They had a recent Edge launch that was really significant. AI technologies that is going into their business. They’re very focused on solutions and service. They’re basically chasing what they call a trillion dollar, 2025 IT services business. And so they continued to expand in that sector.

So you basically have infrastructure, you’ve got services, and then you’ve got devices. And, Pat, I would say, across the board, I mean, the company has done extremely well. You saw, I believe they’re margins in devices up significantly year on year. Their operating profit jump like 21%, which as we know in the device space, that’s hard to do. Devices are not like services, where in services you can push margin. Of course, ASPs have gone up a little bit with demand and whatnot, Pat, but they’ve been able to show growth across the board.

So I think it’s a combination of that. I mean, they are domiciled in China. I do think sometimes the company gets looked at a little bit differently, but their US presence is very substantial here, Pat. They have a large headquarters here. They have lots of employees here. They have a go-to-market here. And they work, I would say, in a very strategic way between the two, between Lenovo here in the US and China. They are very focused on meeting a number of what I would say social impact kind of objectives, and they talked about that in their most recent earnings.

Especially in areas like sustainable materials, but not just for the greenwashing aspect of it. But what’s been impressive is they’re looking at these things, they’re addressing and acknowledging the needs for these things, while using these things to create what they’re kind of referring to as sustainable profitability in the business. And that’s saying, “Hey, we want to continue to grow revenue, but we also want to make sure that we’re profitable and we’re delivering to shareholders.”

This is a stock, by the way, that doesn’t move much. I mean, just being straightforward. It does not move much. Great results, lesser results, it seems to be kind of a steady Eddie type of stock. But you can’t confuse that, Pat, and everybody out there, I know you wouldn’t confuse that buddy, but everyone out there can’t confuse that for not having an impressive amount of growth. When you’re seeing record revenue, and you’re seeing incredible margin increases in businesses that are so hardware heavy, you’ve got some people that are really operating and really got their hands on the dials, making some good decisions. So it was a good quarter for Lenovo.

And by the way, between Dell, Cisco’s good quarter, and now in Lenovo, I mean infrastructure on-prem is back. This is not just cloud buying. So earlier on in the pandemic, we saw a lot of cloud buying. Now what you’re actually starting to see is enterprise data center buying, you’re seeing branch office infrastructure buying. And so I think that you’re starting to see the growth come back, because companies are going to bring people back to the office.

By the way, Pat, last thought here, we need to have a talk about this, people are going to go back to the office. I’m increasingly convinced companies cannot do this remote thing forever. There will be changes, but we’re going to see it spin back, which means there should be some good spending on the infrastructure to support that.

Patrick Moorhead: And listen, if they want to keep Gen Z happy and they want to keep mentorship going. You just can’t do everything virtually. I never thought it was. I thought we were kidding ourselves and I just need to go as far as my own kids and see how they’re reacting to this. But let me weigh on this, kind of fill in some of the things you didn’t talk about. Some of the things that really impressed me.

The other thing I want to mention is, if you didn’t notice, the first thing that they talked about and you put things in the order of importance was SSG, their services. Lenovo is the only infrastructure company that completely breaks down their services like this down to the op inc level, which to me is, if you want to turn a ship, this is one of the ways that you do this. I was on the phone with Ken Wong, president of SSG, either yesterday or the day before, we had really a great conversation on this.

Not only do you put it first, which, by the way, is super risky, because all the eyes are on you. And oh, they didn’t just hide it with a percentage increase. They put the number there. 1.5 billion in Q2, with a 44% year on year improvement in the margin. So I think that takes a lot of courage to do this. And I think Lenovo is trying to move the perception from a box pusher to a service provider. And I really appreciate the way that they’re doing this.

One comment in ISG, first time for profitability, which is important. We saw a ton of revenue growth, a lot of hyperscale growth on the server side, a lot of storage growth that we saw. And I know that Lenovo’s competitors always like to denigrate what came out of ISG because like, Hey, where are the profits? Here we go, we have profits. The one thing that everybody needs to keep in mind is the profit model of Lenovo, and by the way, this could be why maybe the stock hasn’t moved much, could be because of that margin model. But they’re in a position to take share, because the expectations of their shareholders are a lot lower.

And where Lenovo started, which was in PCs, anything an SSG, an ISG actually makes the overall business and the margin profile go up. And that’s what I see as a, as a recipe for market share growth. IDG just keeps humming along while their growth wasn’t as high as, let’s say, Dell, who had 30% growth, they did have 16 growth, but their profit was off the chain. 21% improvement in operating profit.

And by the way, I’m not doing the comparison to Dell to denigrate it. Lenovo has a lot of consumer in there, which isn’t taking off, where on the other hand, Dell is more focused on commercial. Dell, it had 30% growth in commercial, which overall led to a 26% growth in Dell, which just leads you to understand just how big the commercial business is at Dell and how big the consumer business is in Lenovo. Altogether a really good quarter for them. They’re a company that I have my eyes on and not just for the boxes that they have, but more along the lines of services.

Daniel Newman: Quietly and consistently doing their thing, Pat, and so got to give credit where credit’s due.