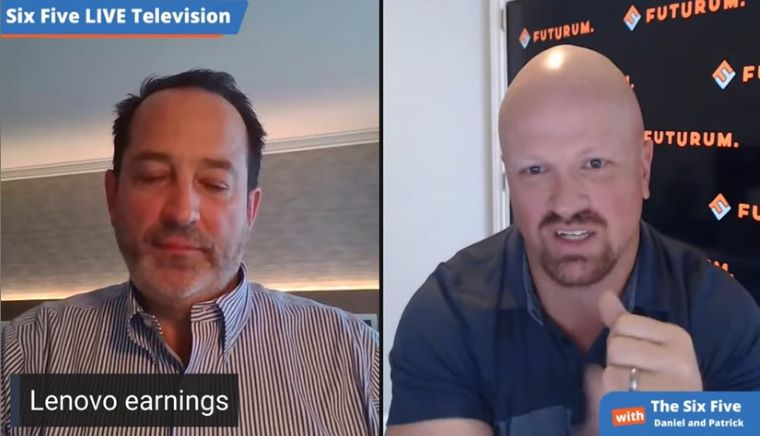 The Six Five team dives into Lenovo’s earnings on the second episode of Earnings Palooza!

Daniel Newman: You know, got to do this, so we got to, by the way, and I got to spend some time with YY, and YY, the Chairman and CEO that’s how he, that’s his nickname, that’s how he is addressed. And he came to the Grand Prix, Pat, and we hung out and we heard from him and he was very optimistic and very positive and for largely good reasons. Now over the last several quarters, Lenovo has been outperforming the industry. And this company sort of focuses on, it’s sort of broken its business into three big focus areas. You got the devices, the IG business, you got the CSS G, and you got the, is it DCG? ISG Infrastructure service. Yeah, sorry about that. There’s so many acronyms out there. And this company is one that loves their acronym. What happened though, Pat?

So overall revenue down just a little bit, but margin up and profit up. So on a year over year basis, given the fact that this company and they showed a slide, 62.6% of its revenue mix is PCs and yet only a 4% decline in revenue. Well, how did they fix that? How did they do that? Well, they diversified their business and they’ve diversified very well into areas that are not being hit as hard by the market. So you want to look at where things have gone. Well, services, 26% growth. You and I talked to Ken Wong who leads that business late last night and that was a great opportunity to kind of hear what they’re doing there. And then ISG, which is led by our friend Kirk Goggin, Kirk just saw a 33%. So they’re making huge growth on a year over year basis into those particular business units.

And what they were essentially able to do is offset the softness that took place in the PC market. The company is doing the things right to gain profitability and of course they’re focusing on what they kind of call this one Lenovo program. Now question I’m asking, and I’m waiting for a response on is I want to understand with Lenovo’s incredible strength in PC that 63% of this multi-billion dollar business, how much they’re able to lean on that to keep growing that non PC business. They’ve been able to diversify to that close to 60/40 mix. But if they’re going to be successful over this sort of one to two year, what I think is going to be goalie in the space for PCs, they’re going to have to see that ISG number and that services number continue to grow. So you’ve got the device as a service thing, that’s a big part of this, of the services, but that’s going to have to scale into a lot more enterprise services.

And then of course the ISG business, company got some really important approvals to do more business with the federal government here. That was a big thing for Lenovo. And of course they’ve had a big diverse skew win across the portfolio with, and we’ve done a couple of their server announcements here on the show. So, you know, see that the company believes that ISG is a huge moat for it. They’re seeing the server market growth, they’re seeing the edge growth. I mean they’re quoting out some numbers, Pat, they say by 2025 the server opportunity’s going to be $134 billion. And by the way, best growth, I’m just looking at their last five quarters this quarter. So on the ISG business.

So, I’m really liking the fact that the company’s put its head down, it’s diversified the business and it’s coming into what everybody’s looking at is kind of a tough period for the OEM on strength. The number to watch going forward is going to be Dell to see, because that is the most sort of comparable in terms of portfolio and see how Lenovo did and how did Dell do in this particular quarter. Because like I said, Lenovo is really able to prop itself up well seeing record revenue in areas like storage and Edge and offset a lot of the weaker softness in the PC space. So Pat, I feel like we’re cheerleading, I’m not meaning a cheerlead, I’m just being candid. It was a really good performance.

Patrick Moorhead: Listen, there’s cheerleading, which is saying stuff that you don’t actually understand, in my opinion, and then there’s admiration, and there were a lot of things strategically that Lenovo did that if I were a betting man, I would’ve said, I don’t think this is going to work. First of all, Lenovo used to be just a PC play. A good one, don’t get me wrong, and they absolutely kicked butt with the ThinkPad brand in particular, but then they went and they bought Motorola’s handset business from Google and then they bought IBM server business X86 server business from them, and those businesses were absolutely tanking after they bought them. And profitability was super, super elusive. And what Lenovo did is they brought in some really strong management to figure out both of these businesses. And heck, the Motorola brand is number three in the United States and it’s profitable.

And if I look at their roadmap, I got a sneak peak last week with their IDG senior management, the roadmap looks freaking hot. So, super-excited with that. And then when you look at, the company brought in Kirk Skaugen to run ISG, I think he was the second guy who came in there, took many, many years to turn that boat around. And here we are, record revenue, record operating profit, record revenue in not just in one segment, like CSP, but in enterprise and SMB. CSP grew 48% Daniel. Hmm, seems kind of close to the amount of growth that we’re seeing in the top CSPs plus gaining share from some of these ODM only folks. It’s the first company that I’ve heard from that actually outgrew the market and they did an enterprise and SMB by five points. Then you might say, “Oh, it’s got to be all the Asia out of China.”

Okay, record revenue out of the Americas, EMEA, and Asia Pacific. Okay, that takes that off there. “Oh, it must be just, just servers.” No, no, no. Record storage, Edge AI servers, and storage. Sorry, and servers. Outperformed their forecast by between 20% and a 100%. Oh, and by the way, in the quarter they brought out over 50 new products. So, do I sound like I’m cheerleading? I don’t know, maybe. But they’re kicking butt in places that other people aren’t. They’re taking share and they’re growing profitability. So, yes, I think that’s cool. And, hey, let’s just have even more risk. Let’s create a services division inside of a company that isn’t known for services.

And then let’s talk about them first on our earnings call, first in our product presentations. And like you said, doing really well. The one thing I want to zoom in on, which really stood out to me is I get a lot of the arguments in the market that says, “Hey, Lenovo’s doing a bunch of break fix of the hardware that they’re bringing up,” boom, manage services and project solution services, or 52% of revenue mix. And that says to me that 48% is break fix. Not that break fix is bad, but it’s very highly margin, but it’s not as sexy and it’s not as scalable as their managed services and project and solution services that they do. And oh, by the way, true scale, they have eight case studies out on the website. I was really, I wouldn’t say dogging them, but okay, as a service, let’s see the proof. And they’re starting to build that marketing capability behind it.