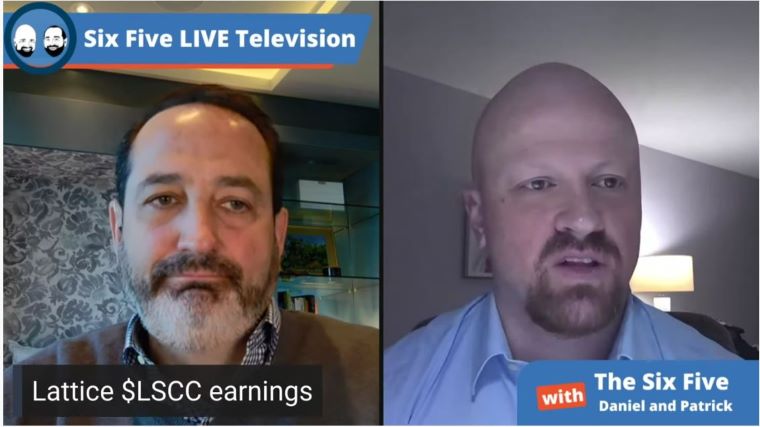 The Six Five team does a deep dive into the latest earnings report out of Lattice Semiconductor.

Daniel Newman: We’ve got one more topic, so let’s get into it because you got to go, man, you’ve got a busy day. I’m up early because of you, so I want to get us through this one. So speaking of FPGAs, Pat, and speaking of patient of a really strong market, I actually came in Tuesday night, sat down Wednesday morning with Jim Anderson, Lattice Semiconductor. That podcast will be out in a few, maybe even today, in fact, but you and I should talk about this. Last year I had marked Lattice as a company to watch among the semiconductors that aren’t named Intel, AMD, Qualcomm or NVIDIA, because it seems like that’s what we always talk about. Their growth has been fantastic. I think a 32% quarter growth, 26% I believe was on the year growth.

And this is a company that focuses on the kind of the low to mid-tier FPGA market space, made some very interesting acquisitions this year, has increased its focus on software, moving into areas like AI, playing in some very interesting spaces, automotive, industrial, IOT. They are partnered sidecar with a number of the big chip makers that we have talked about. So this is a company that is seeing more of their chips per device than ever before. So they’re seeing an increase. They’ve also been a company that’s been kind of a bit of a supply chain winner. There’s a benefit to the programmability of these Pat because it gives flexibility to companies and as Lattice has made it possible to do FPGAs affordably with software that’s flexible, they’re seeing more and more adoption of their products across all these different industries.

So they’re seeing their operating profit jump. They’re seeing in guiding towards significant growth. It’s kind of one of those really good stories. I mean, at the peak of last year, they were up like 80%. I mean, this company is starting to get recognized. They’re doing everything right. I mean, a 3… Pat, you had this in your tweet, so I’m going to steal it from you 3.7% gross margin improvement in the quarter basically means they have unbelievably elasticity in their pricing that they can continue to drive prices and customers are willing to pay, doing some very cool things with their technology, too, Pat. Some of their sensing technology that they’re using for some innovative applications and client, for instance, to be able to see over the shoulder for visual hacking using some of the technology, Pat, some of their technology and servers for some security, for firmware, to be able to help prevent server in some sort of attacks that could be done on data center technology by catching it early in the boot, as opposed to letting it ever affect the deeper software layers.

Just doing some really interesting things with their FPGA, Pat. And like I said, increasingly involved in partnering with some of these big chip makers, they couldn’t disclose all of those names, but Jim did tell me in our conversation that they are seeing their growth in a demand from automotive. They’re seeing growth from the big server and cloud companies growth in 5G mobility technologies and huge opportunity in industrial applications as well. So great quarter Pat, it’s hard to not root for Lattice semiconductor up and comer in this FPGA space. And of course competing to some extent with Xilinx, but they sort of meet at a certain point in the market. So they’re not going head to head. I just put you to sleep. You going to wake up. Is that a yawn or that a hurry up and be done already?

Patrick Moorhead: No, I got to go in like two minutes, so…

Daniel Newman: All right, let’s go. So give me your best. Fill it in for me.

Patrick Moorhead: Lattice crushed it. I mean, if I look at Jim Anderson’s performance over the last few years, I mean, he’s done exactly what he said he would do. He got the company out of business that didn’t make sense. And he got them into businesses that made sense. Good profit. The first couple years, not a lot of revenue growth. And Jim said, “Listen, 2022 is the year of growth.” Well, I think he hit it a quarter early. Revenue was up 32%. And yeah, I want to put a highlight on the gross margin. Usually we talk about basis points because it’s easier, but 3.7%, screw basis points, he literally improved.

Patrick Moorhead: Yeah. Yeah. And his forecast for 22 was even higher gross margins, so I didn’t necessarily expect a gross margin improvement. I really wanted to see growth. The secret weapon here is that we have all this growth and the new mid-range that the company, new mid-range FPGAs that the company announced, but hadn’t shipped, haven’t even impacted yet. And the way this is square at the belly of Xilinx and Intel. AMD, Xilnx and Intel’s Altera, where Altera and Xilinx are both very focused on the bleeding edge, the highest end FPGAs and in Xilinx adaptive SOCs, it’s essentially leaving this mid-range wide open for Lattice. So literally the best is yet to come for these guys.